Sightseeing is not the only activity tourists seek when visiting a city. Some visitors prefer New Bond Street to Trafalgar Square in London and Avenue des Champs Elysées to Notre Dame Cathedral in Paris. ‘High Streets’ and endless opportunities for window shopping and making unique purchases belong among tourist interests – for some people they are even at the top of their list. Enthusiasts of shopping tourism arriving in Bratislava, however, need to mostly bypass the city centre and have to look towards the more suburban shopping malls. 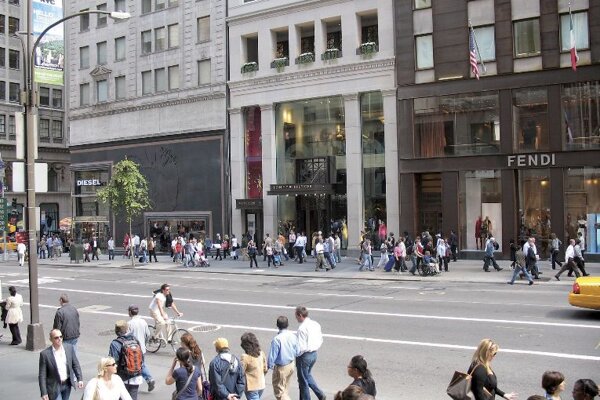 Sightseeing is not the only activity tourists seek when visiting a city. Some visitors prefer New Bond Street to Trafalgar Square in London and Avenue des Champs Elysées to Notre Dame Cathedral in Paris. ‘High Streets’ and endless opportunities for window shopping and making unique purchases belong among tourist interests – for some people they are even at the top of their list. Enthusiasts of shopping tourism arriving in Bratislava, however, need to mostly bypass the city centre and have to look towards the more suburban shopping malls.

“Bratislava cannot be compared to cities such as Paris, Budapest, Vienna or Warsaw,” the chief architect of the City of Bratislava, Štefan Šlachta, told The Slovak Spectator. “In the past Bratislava used to have its ‘High streets’, mainly Sedlárska Street, the Korzo and Obchodná Street [literally, in English, ‘shopping street’]. The failure to properly renovate these streets and fine tune them to the needs of a new era after 1990 led to famous brands locating their outlets in the newly-built shopping centres where they found appropriate conditions. For example, Obchodná ulica has turned into something like the Viennese Mexikoplatz [a place where Slovaks went shopping for cheap electronics in the 1990s].”

Bratislava’s lack of a downtown shopping boulevard similar to Nowy Swiat in Warsaw or Fifth Avenue in New York was registered in the results of the real estate adviser Cushman & Wakefield’s report Main Streets across the World published in September 2009, which ranked city shopping streets according to the rental prices of property. New York’s Fifth Avenue topped the list with the highest prices of €13,027 per square metre per year. Out of 274 streets analysed in the report, Bratislava ranked 42nd with an average cost of €900 per square metre per year. But the report did not specify which Bratislava main shopping street was included and simply ranked ‘downtown’ as a whole.

“Yes, it’s true that there is really no well-defined pitch with very strong retail offerings in downtown Bratislava and so we just referred to ‘downtown’,” Andrew Thompson, the managing director of the Bratislava National Office of Cushman & Wakefield told The Slovak Spectator, listing several reasons why this is so.

“Bratislava is relatively constricted by its historical buildings and so development [of office, commercial and residential space] has tended to occur outside the centre,” Thompson said. “This, coupled with the relatively small size of the centre has encouraged developers to construct shopping centres on the edges of the centre of Bratislava. Most retail outlets are now concentrated there.”

Another reason is that downtown Bratislava is heavily dominated by cafés and restaurants.

“There is not an obvious ‘clean area’ where retail outlets could be created in sufficient quantity to begin a dominant High Street pitch – though we are aware of some plans to create something more suitable,” Thompson said.

According to Thompson, the primary locations for a High Street in Bratislava include Ventúrska, Obchodná and Laurinská streets with a further potential in, for example, Hviezdoslavo Square. But the fact that Bratislavans and the shopkeepers currently prefer the shopping malls is visible.

“Increased automobile use and the tendency to ‘shop big’ but less often has helped in the development of shopping centres which are typically strategically located to benefit from accessibility and have good car parkings” Thompson said. “While I believe that Bratislava city centre is quite accessible, the cost of parking in the centre of Bratislava is at least one factor which may put people off from coming to the centre for shopping.”

Šlachta similarly believes that limited parking possibilities in the city centre limit the future development of a High Street shopping area in the centre.

Thompson said a greater amount of suburban shopping centre development is continuing apace in many other countries but that some cultural factors exist in each country that either encourage or inhibit the frequency with which shoppers travel to shopping centres.

Šlachta agreed that the trend is similar all across Europe. Other cities similar in size to Bratislava are facing the same issues – Krakow, Pecs, Graz, and Brno in central Europe as well as Bergen in Norway, Aarhus in Denmark or Maribor in Slovenia.

“In these cities, however, so-called shopping galleries are being erected, nice roofed streets that constitute a part of bigger complexes which then become not only hot spots for shopping but also a centre of social life,” he said, adding that in Bratislava the Eurovea development area could provide a similar space.

Thompson also thinks Eurovea could be a step to improving city centre retail since its emphasis as an extension to the city centre, together with its riverside location and attractive landscaping, will help to fill the existing gap in Bratislava.

According to Šlachta, one of Bratislava’s drawbacks is that it doesn’t have a compact, concentrated metropolitan structure. There are only fragmented areas which have the scale of a metropolis such as the former Eskontná bank building on Sedlárska Street (which today houses the Roland Café) or several other new buildings located downtown.

“We don’t have a boulevard where something similar [to a High Street] could emerge – neither SNP square nor Gorkého Street nor Štefánikova Street,” Šlachta said. “Only the new projects, such as the renovated Špitálska Street or Twin City at Mlynske Nivy, will hopefully provide the opportunity to create something like this.”

Šlachta said he would really welcome it if some brand shops moved from the shopping malls to the city centre, but in his view Bratislava is still far from that point.

“Asking for replicas is a sign of provincial crudeness and petty bourgeois thinking and not a way to give a true metropolitan character to Bratislava,” he said, referring to the discussion about Vydrica, the old quarter under the castle hill which was destroyed in the 1970s, for among other reasons, the construction of Bratislava’s New Bridge. Some have called for the area to be brought back by building historical replicas where the houses used to stand. “Zurich has got the Bahnhofstrasse; we’ve got one too but the difference is quite large. Obchodná Street could, however, become one of Bratislava’s High Streets – it has potential for that. But it’s going to take a while.”

NO High Street = less from tourists

Bratislava is not only missing out on a distinctive aspect of metropolitan character which experts believe a High Street could help develop but also the income from tourists who would spend much more in the city centre if they had better shopping opportunities there. Thompson believes that the absence of a strong city centre retail area has at least one downside related to tourism.

“Many tourists do not anticipate spending time in shopping centres; they would much rather browse shops on a High Street,” he said. “If we look at Prague, for example, many of the shoppers are tourists. This lack of retail shopping opportunities in the centre reduces the amount of time and therefore the money that tourists are prepared to spend in Bratislava and so in a certain way, Bratislava is likely to be missing something to become a larger centre for tourism.”

Thompson said this is especially noticeable in winter when the heart of Bratislava seems to ‘die’, with only a handful of restaurants and bars attracting people. Slovaks, who are drawn into the centre in the summer season to meet and enjoy time with friends, simply disappear along with fair-weather tourists.

“At the moment there does not appear to be a strong reason for Slovaks to visit the centre in winter and a stronger retail offering would certainly help to remedy this and create a more cosmopolitan city,” said Thompson.