THE OUTCOME of the regional elections is a reason for celebration by the ruling Smer party of Prime Minister Robert Fico. While the first round of the elections brought the party control of most regional parliaments, the run-offs, which took place in four of the eight self-governing regions (VÚCs) of Slovakia, confirmed the strong voter support for Smer. The top position in seven out of eight regions went to candidates backed by Smer and its allies who will hold the offices for a five-year term. 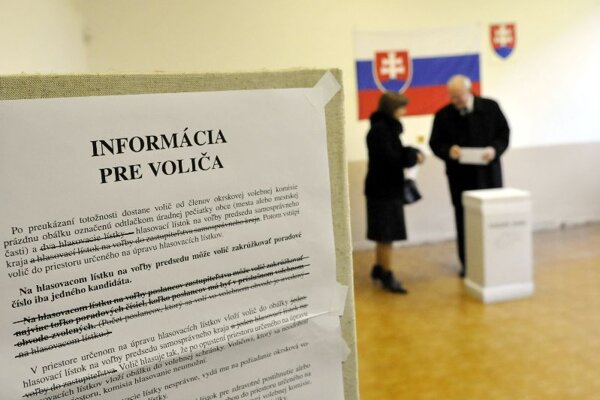 THE OUTCOME of the regional elections is a reason for celebration by the ruling Smer party of Prime Minister Robert Fico. While the first round of the elections brought the party control of most regional parliaments, the run-offs, which took place in four of the eight self-governing regions (VÚCs) of Slovakia, confirmed the strong voter support for Smer. The top position in seven out of eight regions went to candidates backed by Smer and its allies who will hold the offices for a five-year term.

The results of the second round run-off between the top two vote-getters in the four regions brought no surprises. Two of the incumbent Smer-backed presidents were confirmed in their seats; one incumbent who had lost Smer's endorsement had already been edged out in the first round on November 14.

Pavol Sedláček, supported by the coalition of Smer and the Movement for a Democratic Slovakia (HZDS) won with over 59 percent of the votes in the Trenčín VÚC over Martin Fedor, the candidate of the right-centre opposition parties.

In Prešov Region, where the first round of the regional elections was marked by opposition accusations of vote-buying in Roma settlements, incumbent Pavol Chudík, the candidate of Smer, the HZDS, the Movement for Democracy (HZD) and the Greens received over 54 percent of the vote and defeated Ján Hudacký, the candidate of the Christian-Democratic Movement (KDH), Slovak Democratic and Christian Union (SDKÚ) and Freedom and Solidarity (SaS) parties.

The Banská Bystrica and Bratislava Regions will have new governors. In Banská Bystrica Region, Vladimír Maňka, the joint candidate of Smer and the HZDS, won the election with 53.7 percent over Jozef Mikuš from the centre-right parties. Maňka will replace Milan Murgaš, an independent candidate who was elected in 2004 with the endorsement of Smer, but whom the party ditched in favour of Maňka for this year's elections.

Bratislava Region will be the only part of the country with a regional governor who was not endorsed by Smer. The voters gave Pavol Frešo, an MP for the SDKÚ who was also endorsed for the regional presidency by the KDH, SaS, the Civic Conservative Party (OKS) and the Hungarian Coalition Party (SMK), 60.5 percent of the vote. He will replace the incumbent, Vladimír Bajan, who officially ran as an independent candidate but received strong backing from Smer.

Smer considers the results of the run-offs in the regional elections to be a success, prime minister and party chairman Robert Fico said after the results were announced, the SITA newswire reported.

Fico pointed out that the governing coalition defeated the opposition parties 7:1 for the posts of president in the eight regional governments. Four candidates for the top regionalpositions supported by Smer won in the first round held on November 14.

“Smer is the clear winner of these elections,” Fico said, as quoted by SITA.

He also stated that the party wants to build its position on the basis of these results and also appreciated the number of deputies in regional parliaments that his party won in the first round of the elections.

Fico admitted that mistakes were made in the Bratislava Region where the winner was the candidate of the opposition parties.

“There was a mistake in the campaign,” he said and remarked that the party would draw certain conclusions from that, without specifying further. “You will see soon, there will also be some personnel decisions.”

Bratislava Region was the one part of the country that kept the centre-right opposition parties from a complete defeat, as their candidate Pavol Frešo, a member of the SDKÚ, won with over 60 percent of the votes. SDKÚ chairman Mikuláš Dzurinda called the result a big breakthrough for his party.

“It’s the first time we’ve had a governor,” Dzurinda said, as quoted by the SITA newswire. Frešo and other SDKÚ leaders heralded it as a big success. The party’s deputy chairman, Ivan Mikloš, said in a discussion on the private Markíza TV channel that the way Frešo won the election was of key importance, because it was not only about Frešo and Bajan, but also about Fico, who appeared on campaign billboards alongside Bajan.

“SDKÚ simply lost in seven regions, and that’s important, not to make a case study out of the SDKÚ victory in Bratislava,” said Boris Zala, a member of the European Parliament for Smer, who took part in the television discussion with Mikloš.

Mikloš pointed out that the victory of the Smer candidate in Prešov was very tight and that is the region where Mikloš claimed “the [ruling] coalition was buying the votes of Roma voters”.

Sociologist Pavel Haulík from the MVK polling agency said that Frešo’s victory in the Bratislava region is a success but that SDKÚ has ‘privatised’ it.

“It’s not just the success of SDKÚ,” Haulík told The Slovak Spectator. “Frešo became the governor thanks to the support of several political parties of which at least KDH and SaS have a relatively decent position in Bratislava and it’s not appropriate for Dzurinda to forget about that in his interpretation of the results. And that’s what happened to him, he forgot.”

According to Haulík the regional elections show the real power of the political parties in the country prior to the national elections, which are scheduled for June 2010.

“The fact that Smer has an advantage in relation to its coalition partners as well as to the opposition parties has been confirmed,” Haulík said, noting that the circumstances may change in the six months that remain until the parliamentary elections. However, the probability that Smer will be in the best position to create a government with one or two other partners is very high in his opinion.

While the voter turnout in the first round of the elections exceeded 20 percent, which was generally seen as a positive sign, the second round attracted only 18.39 percent of eligible voters. According to Haulík, the difference between the two rounds shows that the two-round system of elections does not work very well and is ineffective.

“The second round only confirmed the results of the first round,” Haulík said. “These elections showed that the second round is not necessary at all.”