LAST YEAR’S skiing season wrinkled the foreheads of many ski resort operators in Slovakia: not much snow early in the season and temperatures above zero even in the mountains; heavy snow falling when most people thought the season was over; and the introduction of the euro scaring off tourists from Poland and Hungary. 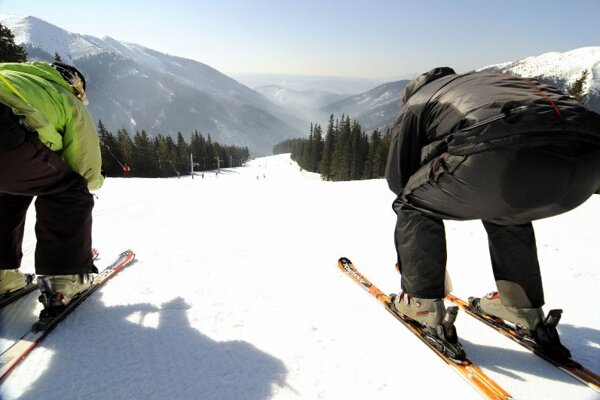 LAST YEAR’S skiing season wrinkled the foreheads of many ski resort operators in Slovakia: not much snow early in the season and temperatures above zero even in the mountains; heavy snow falling when most people thought the season was over; and the introduction of the euro scaring off tourists from Poland and Hungary.

What skiers and operators of resorts may hope for most of all this season is a lot of snow falling at the right time. But since the promise of enough natural snow for the next four months is one of those conditions whose fulfilment cannot be guaranteed, ski resorts are rather counting on their own strengths and wits.

Compared with past years, there are more new cable cars and lifts waiting for skiers and the prices of ski passes have gone down, since half-full slopes do not in any way please ski resort operators.

The economic crisis and the adoption of the euro, which made Slovak ski resorts much more expensive for visitors from countries outside the eurozone with their weakening currencies, visibly reduced the number of visitors to Slovakia last year. Peter Chudý, the director of the High Tatras Tourist Trade Association (ZCR), believes that the upcoming season in the High Tatras will test local businesses as they respond to the current situation.

“This winter will be a barometer of whether Tatra businesses are able to adapt to changed, much more difficult conditions in the tourism market during the economic downturn,” he said in mid November, as cited by the SITA newswire, adding that the economic crisis is affecting tourism for much longer than other segments.

It is said that every cloud has a silver lining. This held true in the ski business when the drop in the number of visitors propelled some other things forward. Some ski resorts joined with other tourism businesses and prepared packages of services, which price-sensitive Slovaks know about from trips to the Alps. These packages usually include accommodation and ski passes together for a better price than when bought separately. Purchasers of such packages can also enjoy discounts at ski resorts’ partners and save as much as 30 percent.

Two key operators of ski resorts have launched a joint ski pass, a novelty in Slovakia before this year. Now skiers can buy a ski pass from either Park Snow or Jasná Nízke Tatry and then ski in Donovaly, on Chopok in the Low Tatras, in the Veľká Rača ski resort, as well as at Štrbské Pleso in the High Tatras. According to Jasná Nízke Tatry's website, the joint pass enables skiers to visit slopes exceeding 50 kilometres in length and to ride on 12 cable cars and 28 ski lifts.

Probably the most anticipated new feature on Slovakia’s slopes this season will be the new black-orange cabin cable car Otupné-Brhliská in the ski resort of Jasná. This €13 million investment doubles the transport capacity of the previous cable car.

In the High Tatras, skiers can look forward to a new ski slope – Furkota. Snow-making facilities and a six-seat cable car are parts of this project. In the future the slope may be extended up to the village of Štrba, thus making it the longest ski run in Slovakia.

And famished skiers will be able to refresh themselves in a new restaurant sitting above the top station of the cable car to Solisko. Such a facility has been missing at this site for years.

Other ski centres have also invested in new lifts and other amenities. A four-seat cable car was built in the Bachledova Dolina – Jezersko ski centre, a lesser-known resort near Ždiar at the eastern border of the High Tatras in Zamagurie. This resort offers a mix of less demanding slopes in the Bachledova Dolina valley and a steeper terrain on the opposite mountain. Beautiful views of the High Tatras and the almost untouched countryside around Zamagurie is an enticement to visit this quiet yet well-equipped resort.

In Králiky, a ski resort in the Kremnické Vrchy mountains known for its usually thick snow base, a new four-seat cable car will please families with children.

After a one-year delay, a new ski resort, the Salamandra, will open in Banská Štiavnica. The resort has a four-seat cable car, a 1,450-metre-long slope and snow-making facilities and should be popular for residents of western Slovakia as it will be the nearest ski centre from this part of the country. Its only disadvantage is the low altitude, ranging from 579 to 850 metres.

Several ski resorts have also invested into new electronic information and online booking systems and others have added snow-making facilities. The association of operators of ski lifts and cable cars, known as LAVEX, reported in late September that the total length of ski slopes equipped with snow-making facilities in Slovakia now exceeds 150 kilometres, SITA wrote.

There is also a bit of sad news arriving. In Liptovské Revúce the ski resort operator failed to reach an agreement with the owners of the land under the ski slopes and this year that resort, known for the longest ski lift and a 2-kilometre slope will not open.

Unusually warm weather has prevented any ski resorts in Slovakia from opening so far this season. Lovers of winter sports can only patiently wait for some freezing temperatures so that operators can at least cover slopes with man-made snow or be satisfied with trying out the wellness, relaxation and other leisure attractions which are gradually becoming fixtures at some centres.

The Slovak Spectator will resume publishing its regular Ski Window as soon as the ski season begins in earnest in Slovakia.