THIS YEAR’S prestigious Dušan Jurkovič Award for architecture has been presented to Prague-based Cigler Marani Architects for Digital Park, an administrative project in Bratislava’s Petržalka district. The awards ceremony took place in Bratislava on November 23. 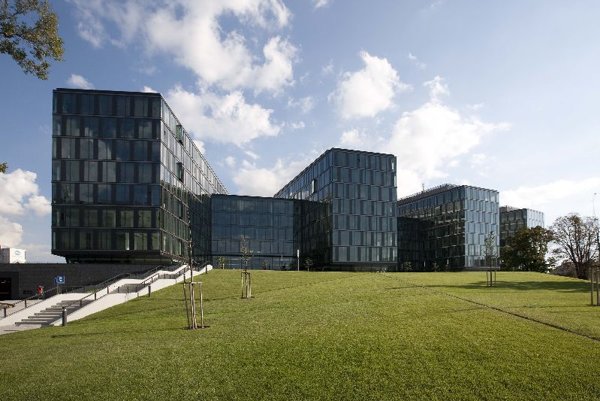 THIS YEAR’S prestigious Dušan Jurkovič Award for architecture has been presented to Prague-based Cigler Marani Architects for Digital Park, an administrative project in Bratislava’s Petržalka district. The awards ceremony took place in Bratislava on November 23.

Announcing the winner of the award, granted for the 45th time this year, the president of the Slovak Architects Association (SAS), Ján Bahna, praised the “exemplary attitude of the enlightened foreign architect,” who found an investor with a sympathetic ear, resulting in an excellent cooperation.

The award-winning project was the second phase of Digital Park, a development by the financial group Penta, and is one of the most original administrative projects in Slovakia. In this project Cigler Marani Architects were inspired by Bratislava Castle, which the development faces on the hill opposite – across highways and the Danube River.

When designing the second phase of the administrative premises, the architects had to cope with the complicated location of the plot, which is flanked by busy city streets and a highway on two sides, a railway on a third, and has the waters of the Danube below it, according Jakub Cigler.

The architectonic concept is based on the connection of four trapezoidal eight-floor buildings made of glass of the same height. The trapezoids are mutually rotated, due to the uneven ground, and provide a view of the castle. The complex is located in an atypical park and a solution to traffic was also created – a high-capacity parking lot is located on the basement floor and surrounding the building is a green park with water features and pedestrian zones. The architects, by constructing this park, created a new city space available not only to the building’s tenants, but also to the general public.

Another prominent prize, the Emil Belluš Award, recognising outstanding lifelong work in the world of architecture, went to Josef Struhař from Bratislava. His works include the premises of Slovak Television, whose tower was the tallest building in Czechoslovakia at the time it was erected. Two hotels in Stará Lesná, the headquarters of the Wüstenrot housing savings bank in Bratislava, and the extension of the Hotel Tatra in Bratislava, were also mentioned among his projects.

The SAS also grants prizes for presentation of architecture and architectural work in the mass media.

This year one of the awards, named after Martin Kusý, went to film director and screenwriter Ladislav Kaboš for his documentary Modern Architecture in Slovakia. Kaboš was successful in his choice of Henrieta Moravčíková, a devotee of the history of architecture in Slovakia, as narrator for his story.

The second Martin Kusý Award went to Štefan Šlachta, the chief architect of Bratislava City Council, for his books about Slovak architects and architecture.