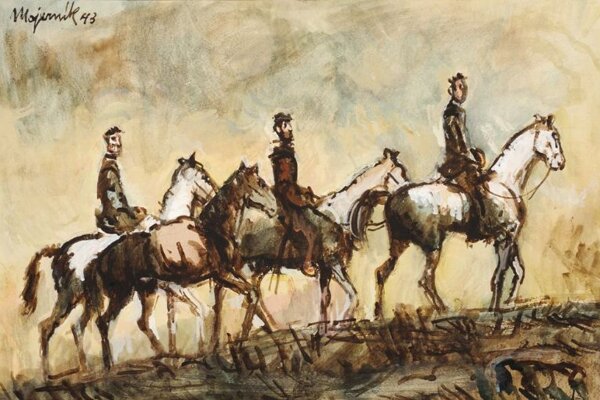 Bratislava EXHIBITION: Small Slovak villages and the large European metropolises of Prague and Paris, toreadors and clowns, soldiers and tramps: these are some of the motifs found in paintings by Cyprián Majerník, one of the most influential Slovak artists, whose best pieces are now displayed at the Bratislava City Gallery. The artist, who committed suicide at the age of 36 in 1945, portrayed mostly people without homes, the world's wanderers. Towards the end of Majerník's life, Spanish knight-errant Don Quixote became his most oft-depicted character, serving once again as a kind of basis for his own self-portraits. The exhibition at Pálffy Palace, Panská 19, is open daily, except Mondays, between 11:00 and 18:00. It can be seen until January 31, 2010 for an admission of €3.32. For further details, call 02/5443- 1556 or go to www.gmb.sk.

The Nutcracker – It has become a tradition that before Christmas the Slovak National Theatre offers a series of performances of this evergreen piece of ballet with music by Russian 19th-century genius Pyotr Ilyich Tchaikovsky.

Advent Concert – Students of the Church Conservatory from the Czech town of Opava have prepared a programme of both vocal and symphonic compositions by maestros.

Christmas Gospel – Some of the most beautiful Christmas carols and gospels are performed by The Hope Gospel Singers, the Technik choir and the Chamber Orchestra. Sisa Sklovská and Otto Kollmann are special guests.

All Stars Basketball League – The best Slovak basketball players vie for the title of the biggest star of this event.

Soft Edge – This show about the relationship with one’s home is the culmination of the LabanFest dance festival, organised at the 130th anniversary of the death of Rudolf Laban, world-renowned Slovak choreographer.

Old Beginning, New End – A portrait of the history of Czechoslovak design by photographer Tibor Uhrín, whose camera caught different products of everyday use after they stopped playing their original roles.

Traps of Visual Illusion/Contemporary Forms of Trompe-l’Oeil – Part of an international project focused on illusion in visual arts, this display is a collection of paintings and installations by 13 artists from both Slovakia and abroad.

Indigo – Based on the tale “Ali Baba and the 40 Thieves”, this operetta by Johann Strauss Jr. brings to the stage charming classical melodies.

AS CHRISTMAS approaches, the cultural programme around the country is getting busier with sacred music concerts like the one to be performed by the Gregorian ensemble from Germany in Košice on December 12. As part of their tour, which includes more than 30 performances in European countries, the eight singers accompanied by top musicians return to Slovakia to offer some Christmastime musts such as Ave Maria, Silent Night, Fields of God, Angels or When a Child is Born. Amelia Brightman, British singer and songwriter, appears as a special guest. The concert will be held at the Steel Arena at Nerudova 12, starting at 19:30, and admission is between €15 and €29. For more information, visit www.steelarena.sk.

The Golden Voices of Gospel – New York-based singers led by Rev. Dwight Robson have prepared a Christmas gift for the Slovak audience.