Slovakia’s banking sector entered the eurozone with a heritage of over-liquidity. Adoption of the euro brought unparalleled exchange rate stability for exporters and consumers as well as unprecedented low interest rates. Selective recovery in several Slovak industries through the rest of 2009 could be supported by the ongoing availability of inexpensive new loans. The economic case outlining the benefits of euro adoption was built long ago in its preparatory phase. However, the merciful timing of the turbulence in the global financial market, which began literally weeks after Slovakia got the green light for euro adoption, brought an invaluable and better than expected positive twist to the Slovak economic experience with the new currency. 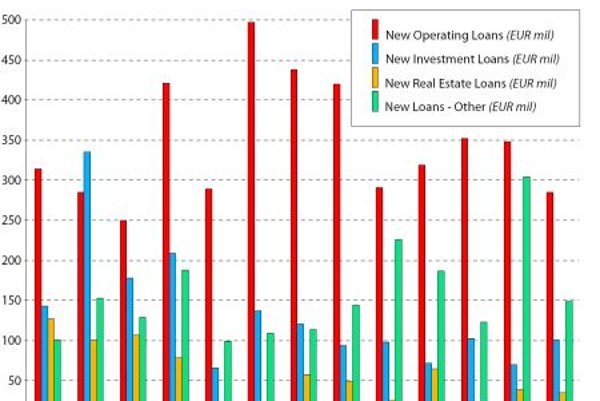 Slovakia’s banking sector entered the eurozone with a heritage of over-liquidity. Adoption of the euro brought unparalleled exchange rate stability for exporters and consumers as well as unprecedented low interest rates. Selective recovery in several Slovak industries through the rest of 2009 could be supported by the ongoing availability of inexpensive new loans. The economic case outlining the benefits of euro adoption was built long ago in its preparatory phase. However, the merciful timing of the turbulence in the global financial market, which began literally weeks after Slovakia got the green light for euro adoption, brought an invaluable and better than expected positive twist to the Slovak economic experience with the new currency.

A part of the Slovak experience with the new currency is the often overlooked ability of our new monetary authority to take actions alleviating the effects of recession. Inherited over-liquidity, coupled with aggressive monetary easing by the European Central Bank, provided for continuous and ongoing availability of new loans in Slovakia. As textbooks would envisage it, new corporate loans in times of economic hardship became cheaper in Slovakia after the euro switchover. This was not necessarily the case in other neighboring emerging markets, where central banks were forced to balance monetary stimulus with efforts to prevent excessive weakening of their currencies, especially early in 2009, by maintaining a wider interest rate differential vis-à-vis the euro.

Hence, even after accounting for the expected exchange rate stability, the non-negligible savings in conversion costs, and significantly cheaper cross-border wire transfers within the common currency area, Slovakia was a shining light in the map of central and eastern Europe in 2009 in one of the most important issues for each and every business: the good, ongoing availability of new loans.

Demand declined but the market did not dry up

According to the National Bank of Slovakia, demand for new loans declined in 2009 but the market did not dry up at all. Moreover, the significant decline of benchmark money market rates, EURIBOR, allowed for cheaper average interest rates to be offered, even after taking into account the recession-driven increase in credit-risk margins. The decline in demand for new loans corresponds with the increase of unutilised industrial capacities, following the significant decline in export industrial orders this year.

The environment of weaker external demand, uncertainty over the outlook for export orders and eroding profitability made corporations more cautious with regards to their original expansion plans. Hence, the volume of new gross fixed capital formation, the corporate investments in the first half of 2009 declined by 11.7 percent from a year ago and, coupled with massive liquidation of inventory stocks, the annual decline in gross capital amounted to 20.8 percent.

Despite the unavoidable rise in stringency of credit approval conditions, lower investments in 2009 led to a lower demand for new loans from corporations. Hence, the annual decline in the volume of newly-provided corporate loans is a combination of both more chaste demand for loans as well as sterner assessment of acceptable risk on the side of supply from the financial sector. The loan/deposit ratio of the Slovak banking sector remains well under 100 percent; Slovak banks command more in overall local deposits than the amount they extended in loans. The continuing comfortable liquidity position of the Slovak financial sector, moreover underpinned by membership in the Eurosystem, allowed new loan business to continue in 2009 without interruption, albeit under inevitably changed conditions.

According to the National Bank of Slovakia, the total volume of newly-provided corporate loans in Slovakia declined by 14.6 percent in the first nine months of 2009 compared with the same, “pre-turbulent” period of last year. As one would expect, the most significant decline in new corporate loans was in the category of investment loans, negative 54.3 percent year-on-year, as well as in new real estate development loans, down 59 percent year on the year.

Investment loans represented 14.6 percent of the new loan business in Slovakia in January through September, compared with 27.4 percent last year. New corporate loans for financing of real estate development represented only 5.7 percent of new business in 2009 compared with 11.8 percent in the same period of 2008. The traditional biggest category of new loan business, operating loans (representing 55 percent of the total), recorded an annual increase of 7 percent in the first nine months of 2009.

On the contrary, the average interest rate charged for new real estate loans increased by as much as 0.7 percentage points from the previous month, up to 3.9 percent; however, they are much lower compared with the 6.3 percent rate in September 2008.

Loan demand up partly due to multinationals

The availability of financing for new loans even during the tough year of 2009 remains good; the decline in average interest rates is an important stimulating contribution to the recovery of the Slovak economy. Part of the higher demand for operating loans comes increasingly from local facilities of multinational corporations which, faced with overall excess capacity, have considered relocating part of their production from other countries to Slovakia, among other reasons, to take advantage of the benefits of good availability of local financing at favorable conditions, especially when compared with some other non-euro markets in the region.

Exchange rate stability as well as the extremely accommodating monetary policy of the ECB contributed to further stabilization of Slovak manufacturing and narrowing of its annual decline to -4 percent in September – the best annual comparison since October 2008.

Although the base effect of gradually weaker production in September last year did play a role in mediation of the annual decline for the overall figure, the encouraging signs of annual growth in an increasing number of Slovak industries corroborates the assumption not only of the beneficial influence of eurozone membership for Slovak business but also its contribution towards strengthening of the Slovak competitive position within the process of geographic optimisation of production capacities of multinational corporations.

Looking towards the next decade

As Europe is emerging from one of its worst recessions since WWII, an increasing number of major corporations will have to make strategic decisions about investments that should help drive their growth in the medium term. In the immediate horizon, the “bumpy road” at the beginning of next recovery will force many European multinationals to further explore options for cost optimisation through geographic relocation of some of their production facilities.

Looking into the next decade, the fastest growth within the half-billion person EU market can be expected in the emerging markets of its new eastern members. The strip ranging from Poland through the Czech Republic, Slovakia, Hungary, Romania and Bulgaria is populated by over 93 million inhabitants. These are the economies starting from a historically lower base and commanding unsaturated markets which still have a sizeable process of gradual economic convergence ahead.

The past two years, however, have reminded potential investors that future risks associated with entry into these markets should not be neglected. In such an environment, the central geographic position of Slovakia is greatly enhanced by both full-fledged European Monetary Union membership, as well as an environment conductive for both foreign direct investment support schemes and good investment conditions: the best sovereign rating among regional peers, a 19 percent corporate income tax as well as no tax on dividends, and also further growth and available financing from local institutions.

When seeking ways to take part in the future expansion of the region and while attempting to minimise risks inherent in emerging market investments, a thorough consideration of Slovakia must be part of the process. While in terms of its labor cost/qualification ratio Slovakia is still an emerging economy, Slovakia has offered since January 2009 all the stability (in terms of exchange rate) and predictability (in terms of fiscal risks and interest rates) of the entire eurozone.

Vladimír Vaňo is the chief analyst with Volksbank Slovensko.