Slovakia has been enjoying Advent, the pre-Christmas period marked by special markets offering traditional souvenirs, delicacies, and typical symbols of Christmas, for ten days already accompanied with tall, decorated Christmas trees that have been erected in the squares of all bigger towns and cities. 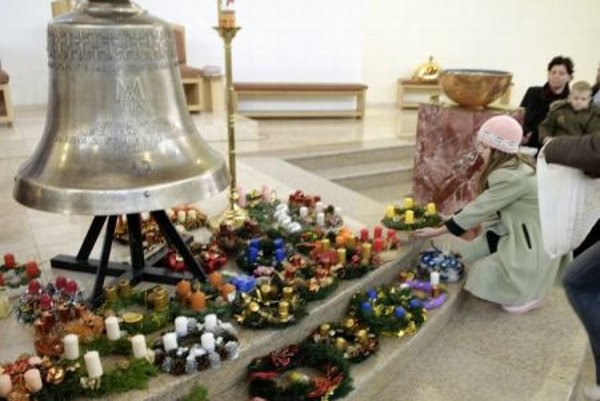 Slovakia has been enjoying Advent, the pre-Christmas period marked by special markets offering traditional souvenirs, delicacies, and typical symbols of Christmas, for ten days already accompanied with tall, decorated Christmas trees that have been erected in the squares of all bigger towns and cities.

Some localities, however, have prepared even more special events for the holiday season. For instance, Kremnica laid a special Advent wreath in its square which is 10 metres in diameter that was consecrated by a priest on the first day of Advent, November 29, immediately after a special Mass at St. Elisabeth Church.

In the towns of Lučenec and Rimavská Sobota in southern Slovakia, as well as in Novohrad, town leaders also prepared festive decorations, too. In Novohrad, there will be 5 smaller Christmas trees along with a rich cultural programme. Lučenec received €2,700 from a sponsor who administers the town’s lighting and with this donation the town could repair – or, in some cases, replace – its holiday decorations. On December 6, six Christmas trees were set alight in the streets of Lučenec that were donated by citizens. During the ceremonial lighting of these trees, traditional groups consisting of St. Nicolas, an angel and a devil were parading the streets. As well, the town is planning its Christmas market for December 10 and 11 and it include various traditional events such as an Advent meeting, a Christmas concert, and the message of Christmas.

In Rimavská Sobota, this year’s decorations will be richer than in past years. On the Main Square, a live tree was lit on December 4 during a cultural programme. Another tree, donated by citizens, will stand in a housing estate, the head of the town’s technological services department, Pavel Rábely, told the TASR newswire. Its Christmas market will take place on December 12 and 13.

Bratislava’s festive Christmas market opened on November 27 and will continue until Christmas Day with two locations, one in the Main Square and the other in Hviezdoslavovo Square. There are tall Christmas trees in both squares and several stages where visitors and residents can enjoy a pre-holiday atmosphere with concerts, performances for children and several other special Christmas programmes.