November 2008 – Construction of units 3 and 4 of the nuclear power plant of Slovenské Elektrárne in Mochovce resumes. The new nuclear reactors and auxiliary buildings should be finished in 2012 or 2013 and will cost about € 2.775 billion. 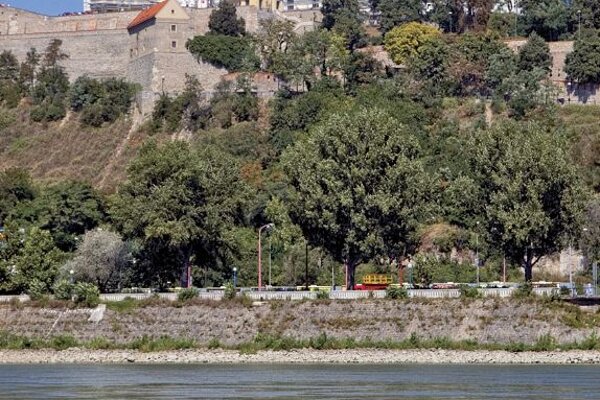 November 2008 – Construction of units 3 and 4 of the nuclear power plant of Slovenské Elektrárne in Mochovce resumes. The new nuclear reactors and auxiliary buildings should be finished in 2012 or 2013 and will cost about € 2.775 billion.

January – Slovakia becomes the 16th member of the eurozone, as the country switches its official currency from the Slovak koruna to the euro at midnight on January 1, 2009.

January – Slovakia experiences a gas crisis when Russia cuts the flow of natural gas to most of its European customers to a minimum and on January 7 stops the flow to Slovakia completely. The turn-off was the result of a conflict between Russia and Ukraine, ostensibly over missed payments for gas imports by Ukraine. At that time, all imports of natural gas to Slovakia flowed from Russia via Ukraine.

April – After a successful expansion in Germany, Hungary, and the Czech Republic, the Austrian bank Oberbank launches its Slovak arm in Bratislava.

April – Volkswagen Slovakia welcomes the decision by its parent company to produce the new Up! model in the Devínska Nová Ves plant adjacent to Bratislava. The car manufacturer’s investment is expected to amount to €308 million.

April – Reconstruction of Bratislava’s Ondrej Nepela Ice Hockey Stadium begins. The reconstruction includes parking places and modification of roads and has an estimated cost of €62.8 million, excluding VAT. The government will cover €40.5 million of the cost.

May – Austrian producer of lift components Wittur opens a plant in Krupina which is expected to provide jobs to 100 people.

May – Finnish company Itella Information, a European leader in the flow of financial information enters the Slovak market.

June – The second phase of Bratislava’s Digital Park project with 40,500 square metres of office space is approved for occupancy. Construction of the second phase was started by Penta company in October 2007. The total investment for the first and the second phases amounted to €85 million. The building complex was awarded the Dušan Jurkovič prize for best comprehensive concept solution.

June – The Slovak government authorises €71 million for heat insulation of older flats and family houses. These loans carry a zero interest rate and are available for improvement of the thermal and technical qualities of buildings used for housing which were constructed prior to 1989.

July – The Slovak Statistics Office releases figures that the volume of building production in the first six months of 2009 decreased to €2.58 billion, 9.2 percent less than the same period in 2008.

July – The Slovak government approves a €69.12 million subsidy to build a new National Football Stadium in Bratislava. The new stadium will have 20,500 seats and the total cost will be approximately €100 million. The new stadium will be constructed at the site of the current Tehelné pole stadium. The Bratislava city government and a group of private investors are also involved in the project which should be completed at the end of 2012.

July – The Slovak government proposes a programme to assist homeowners who have difficulty in paying their mortgages. Beginning January 1, 2010 the assistance will be made available to unemployed persons who have no other resources for making their loan payments.

July – US company ICU Medical announces it will invest €13.95 million in Slovakia within the period 2009-2011 for a new plant for production of intravenous medical appliances with 700 jobs by 2014.

July – The merger of one of the smaller Slovak banks, Istrobanka, with ČSOB bank is completed. The Austrian bank BAWAG sold Istrobanka to the Belgian financial group KBC, parent company of ČSOB, for €350 million after Istrobanka failed to fulfil the goal of achieving a five percent market share.

August – The first phase of renovation of Bratislava Castle consisting of new lighting and facade is finished by Váhostav SK company. The total costs of the renovation of the main part of the castle are estimated at €36.5 million with a deadline in 2010.

August - Slovakia-based low-cost airline SkyEurope cancels all its flights and declares bankruptcy shortly before midnight on Monday, August 31, after a Bratislava District Court had granted the airline temporary protection from its creditors in June to allow the airline to restructure its operations and finances.

August - In August 2009 new industrial orders compared with August 2008 decrease by 23.1 percent in the eurozone countries and by 22.3 percent in the EU27. Total orders fell in all EU member states but the smallest fall of 6.3 percent was registered in Slovakia.

August – Overall exports from Slovakia reach €3.15 billion, down by 14.7 percent year-on-year. Imports also fell by 20.5 percent to €2.9 billion. The foreign trade balance has a positive balance of over €267 million.

August – Retail sales decrease in the first eight months of 2009 by 10.6 percent to €11.2 billion. Retail sales only went up in IT products (by 13.6 percent), culture and recreational goods (by 6.9 percent) and general retail stores (by 1.1 percent).

August – Wholesale sales reach €14.7 billion, down year-on-year by 28.1 percent.
September – Slovakia starts building 52 kilometres of the R1 highway from Nitra to Tekovské Nemce as part of the country’s first PPP project based on a concession contract with the Granvia consortium. The current value of payments that the state will pay the consortium over 30 years is expected to reach €1.757 billion.

September – Plans are announced for a new multifunctional centre in Petržalka worth €90 million. The investor is AIC Leasing & Finanz AG and the centre will be located on land owned by the Bratislava Regional government.

September – Slovakia’s level of economic freedom declines, moving the country down six places to rank 26th, according to the 2009 Economic Freedom of the World index drawn up by the Canada-based Fraser Institute.

October – Slovakia’s National Highway Company completes the widening of the D1 highway between Bratislava and Trnava to three lanes in both directions. The construction started in March 2009 and €36.5 million was invested by the state.

October – Preparatory work begins on the highway between Martin and Prešov within the first package of PPP projects which will continue to February 2010 – the deadline for completion of financing. Five highway segments with a length of 75 kilometres are expected to be completed by the French construction group Bouygues.

October – International investors plan to build a European-level entertainment, gambling and relaxation centre in Jarovce near Bratislava. The multifunctional complex called Metropolis will offer an aqua-park, casinos and conference facilities. TriGranit announced the €1.5 billion investment along with Harrah’s, an international entertainment company.

October – Dia Moulding Slovakia, one of the suppliers of Sony belonging to the Japanese group Mitsubishi Plastics opens a new plant for production of frames for LCD televisions in Nitra. The production capacity of the plant is 2.5 million frames per year and it employs 60 people, expected to rise to 200 by the end of 2009.

October – Plans to construct a crude oil pipeline connecting refineries in Bratislava and the Austrian town of Schwechat are announced. The construction should start in 2012.

October – Antivirus solutions developed by the Slovak company Eset will be distributed along with the hardware of the US chipmaker Intel and it is described as a deal of a lifetime for Eset.

October - The economic sentiment indicator goes up by 2.3 percentage points to 77.5 in October.

Improved confidence in all sectors had a positive influence on the development of the indicator but in annual terms the economic sentiment indicator was 15.7 points lower and 22.9 percentage points below the long-term average.

October – GDP in the euro area falls by 0.2 percent and in the EU27 by 0.3 percent during the second quarter of 2009. Compared to the same quarter of the previous year, seasonally adjusted GDP declines by 4.8 percent in the euro area and by 4.9 percent in the EU27. Among member states for which seasonally adjusted GDP data are available, Slovakia records the highest growth rate (+2.2 percent) compared with the previous quarter.

With press reports from SITA, TASR and Slovak dailies.