Steve Forbes once called Slovakia “the next Ireland, Switzerland or Hong Kong” and the World Bank decorated the country with the badge of the world’s most successful reformer: But these happened before 2006. Slovakia’s reform progress has slowed down since, though observers suggest that the country still offers one of the best business environments in the region. 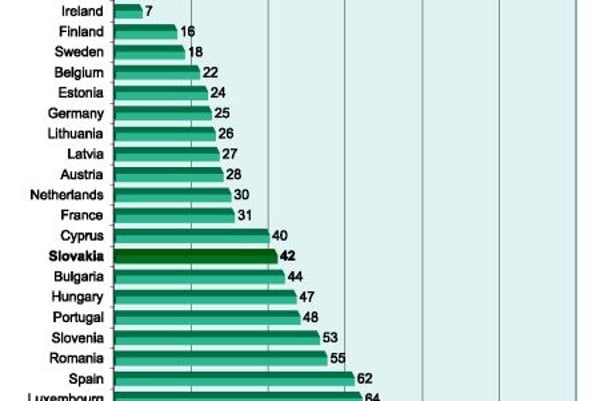 Steve Forbes once called Slovakia “the next Ireland, Switzerland or Hong Kong” and the World Bank decorated the country with the badge of the world’s most successful reformer: But these happened before 2006. Slovakia’s reform progress has slowed down since, though observers suggest that the country still offers one of the best business environments in the region.

Critics of the current Slovak government, which replaced the centre-right government of Mikuláš Dzurinda, say that the team of Prime Minister Robert Fico has not been doing enough to lure foreign investors or in keeping the business environment upbeat while paving the way for healthy economic growth after the country’s recovery from the global economic downturn. However, as an EU member and eurozone country and with membership in most prominent European and trans-Atlantic organisations, investments in Slovakia are fairly safe and labour is still affordable. And trends suggest the country will continue in these ways for the foreseeable future.

Edward Parker, head of the emerging Europe team at Fitch Ratings in London, was quoted by the New York Times in early November 2009 as suggesting that Slovakia, along with the Czech Republic and Poland, will remain among the stronger economies of the central and eastern European region.

The European Bank for Reconstruction and Development (EBRD) – the largest single investor in the region – told the New York Times that the eastern European governments remained committed to economic liberalisation but the bank also said it did not expect a new wave of significant economic overhauls.

“The crisis would complicate the plans for some countries in the region to join the eurozone soon,” Erik Berglof, EBRD’s chief economist said, as quoted by the New York Times. “While the crisis has reinforced the importance of joining the currency zone for stability, those members that might have hoped for a “short cut” to entry will be disappointed, as many have moved further away from the required macroeconomic goals.”

Objectively measuring the attractiveness of a country’s business environment is challenging since businesses have their own sets of priorities when making critical investment decisions. The annual Doing Business reports prepared by the World Bank and its International Finance Corporation are one of the best available assessment vehicles, with measurable variables relevant to most businesses.

Reform in Slovakia is currently losing steam since the pace of improvements made by its current government is a bit slower than some other European countries. While Portugal and Poland made improvements in four major areas last year, Slovakia streamlined only one significant aspect according to the Doing Business report – it shortened trading times by initiating an electronic system for customs administration.

Slovakia’s ranking among all countries dropped from 32nd in 2008, based on analysis of the previous year, to 35th for 2009 and to 42nd for 2010. Though the country has kept its leading position in what some call central Europe – the Visegrad countries of the Czech Republic (74th), Hungary (47th), and Poland (72nd) – Slovakia is lagging behind more rapid eastern European reformers such as Georgia, up from 16th to 11th from 2009 to 2010 as well as Estonia, Latvia, and Lithuania.

Still, Slovakia has leapfrogged past five more industrialized economies of Europe – those of Portugal (48th), Spain (62nd), Luxembourg (64th), Italy (78th), and Greece (109th) – none of which experienced forty years of communism.

Surprisingly, Slovakia – the largest car producer per capita in the world – ranks among the lowest countries in the EU in “trading across borders”. The Slovak government needs to decrease the requirements and shorten the time necessary for both exports and imports. The costs to export or import a container is set by the market, but the government should analyse whether opportunities exist to make the process more competitive.

Slovakia can also foster its entrepreneurial spirit by streamlining procedures for starting up businesses and making the registration steps more affordable to local people. Even though Slovakia's flat-rate corporate tax of 19 percent was revolutionary and was perceived back in 2004 as threatening to industrialised EU countries such as Germany and France, paying taxes remains an administrative burden and the total tax rate as percent of profit (48.6 percent) is higher than the EU average (44.5 percent). Additionally, the Doing Business report suggests that Slovakia needs to shorten the time needed to enforce contracts and decrease enforcement-related costs.

Slovakia has one of the longest waiting periods among European countries for obtaining construction permits (287 days) followed only by Poland (308 days) and Cyprus (an amazing 677 days). This is especially disturbing when compared to countries like Finland or Denmark where the same can be accomplished in 38 or 69 days respectively, according to the World Bank.

The strength of an investor’s protection in Slovakia ranks among the worst in the EU, followed by Hungary, Luxembourg, Austria, and Greece. This item is related to requirements for approval and disclosure of related-party transactions, the liability of the CEO and board of directors for a related-party transaction and the types of evidence that can be collected before and during a trial.

Slovakia also scores low in the category of closing a business, especially in two areas: the time to go through insolvency, which is four years – lagged only by the Czech Republic’s six and half years; and the cost of insolvency as a percentage of the assets, which is 18 percent in Slovakia, the same as in Austria, and followed only by Poland at 20 percent and Italy at 22 percent.

What makes Slovakia especially attractive is its system of registering property. It is the least-costly country in the EU in which to register property. And the process is fast and streamlined.

Slovakia was among the top six countries in the strength of its legal rights index when obtaining credit. The index measures regulations on non-possessory security interests in movable property and scope. However, Slovakia ranked between 18th and 23rd place regarding the quality and accessibility of credit information obtained through public and private credit registries, according to the Doing Business report.

The country ranked between 7th and 10th in the EU in the World Bank’s rigidity of employment index which assesses regulations for hiring, work schedules, paid vacation days, and mandatory legal requirements on dismissal of employees for economic reasons.

Experiences of foreign investors in Slovakia

Foreign investors say they find Slovakia attractive according to surveys conducted by the country’s major chambers of commerce, though they also believe Slovakia needs to do more to fight corruption, improve education, strengthen law enforcement, make its Labour Code more flexible, and speed up implementation of e-government.

One hundred and thirty foreign investors in Slovakia were surveyed by Austrian, German, and French Chambers of Commerce in Slovakia and the results confirmed that the country remains an attractive business location.

Eighty-four percent of the companies would repeat their investments under the current conditions according to the findings released on April 16, 2009. The main concerns expressed by the companies were: corruption, which was acknowledged to be much less of a problem than in Romania or Bulgaria but still a serious problem, especially in the public sector; law enforcement; labour regulations which do not allow quick adjustments to lower levels of employment during economic cycles; and insufficient education and training systems which do not prepare young people well enough for entering working life.

The American Chamber of Commerce (AmCham) in Slovakia surveyed over 100 companies present in Slovakia between March and June 2009. The companies were from 22 different countries. The results were essentially consistent with those found in the Austrian, German and French survey.

Among the main challenges that companies face in human resources is a lack of a qualified workforce which is a result of inadequate preparation of individuals by Slovakia’s education system. Managerial, sales and marketing specializations and technical engineering skills are missing according to the survey results.

The country is struggling with e-government readiness and the extent of use of electronic systems. The United Nations’ e-government Readiness Index ranked Slovakia 38th and behind all of its central and eastern European neighbours in the list of the top 50 countries.

Non-transparent public tenders and allocation of government financial resources were expressed as problems by 72 percent of the respondents and they also reported that the state has not created nor applied transparent procedures for allocation of incentives and EU funds. Furthermore, 81 percent perceive corruption as a barrier to doing business.

Where are the business opportunities in Slovakia?

Opportunities exist in manufacturing – companies with sophisticated production systems can benefit from low-cost labour while doing business within the eurozone.

Slovakia also offers a well-established cluster of firms in the automotive industry – the country slowly increased production and attracted more producers and recently became the world’s leading producer of automobiles on a per capita basis. The skills and the latest technology exist in Slovakia.

Opportunities are also present in Slovakia’s IT market – ESET, a domestic software development house, has consistently grown at an amazing rate of over 1,150 percent per year on average in the last five years and is now a €25 million company. Even during the economic crisis it grew by 951 percent last five years.

Slovakia provides an excellent environment for outsourcing or service centres: Dell and Swiss Re are examples. They both initially moved a small part of their business functions to Slovakia. Even though they downsized their organisations over the past two years, they enlarged their presence in Slovakia during the crisis.

Slovakia has vast timber resources with most of the wood being exported in its raw condition. Companies may benefit from adding value to the commodity at its source and profitably exporting finished products. Drinking water and curative spa waters are also an abundant resource in Slovakia and companies in the food and beverage industry and spa tourism fields may reap the benefits of the country’s 1,200 mineral springs.

The former Commercial Attaché of the Austrian Chamber of Commerce in Slovakia, Konstantin Bekos, said that 1,600 companies from Austria were operating in Slovakia in 2008 and that 99 percent were satisfied and looking forward to increasing their engagement in the country.

The Korean Ambassador to Slovakia, Yong Kyu Park, has said that Korean companies are very aware of the attractive business environment in Slovakia – in 2007 Korean companies contributed to about 10 percent of the Slovak GDP.

“Americans invested $4 billion and are employing about 50,000 Slovak workers,” said Vincent Obsitnik, the former US Ambassador to Slovakia. “American companies found it a great place to be and are staying. And that tells the story…”