ROBERT Fico’s party is now officially welcome in the fold of European social democratic parties. Smer was the very first political party to have its membership in the Party of European Socialists (PES) suspended, in 2006, when Fico included the Slovak National Party (SNS) as a member of his ruling coalition – going against the tradition of PES to not unite with nationalist parties. 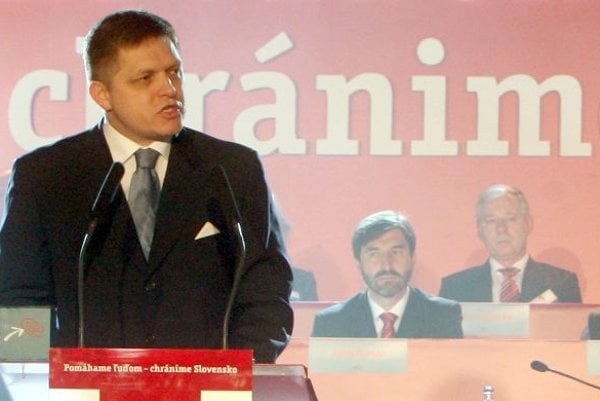 ROBERT Fico’s party is now officially welcome in the fold of European social democratic parties. Smer was the very first political party to have its membership in the Party of European Socialists (PES) suspended, in 2006, when Fico included the Slovak National Party (SNS) as a member of his ruling coalition – going against the tradition of PES to not unite with nationalist parties.

One political observer has suggested that the fact that PES is now willing – after more than three years – to turn a blind eye to the makeup of Slovakia’s ruling coalition could be indicative of a crisis within the social democratic parties of Europe.

In 2006 PES suspended Smer after it agreed to form a government with Ján Slota’s SNS, which it denounced as xenophobic and nationalist, and which it criticised for its history of unsavoury statements addressed at Roma and ethnic Hungarian citizens, not to mention towards Hungary itself, as well as its collaboration with French ultra-nationalist Jean-Marie Le Pen.

Smer could benefit from its reinstated PES party membership, and its re-affiliation is likely to increase the party’s image abroad, according to one analyst.

“The membership certainly increases the party’s prestige,” political scientist Miroslav Kusý told The Slovak Spectator. “The Party of European Socialists clearly indicated in Prague that Smer belongs among the parties which have remained in power.”

According to Prime Minister Fico, the European social democrats gathered at the PES congress in Prague did not identify with accusations made against Slovakia about a decline in conditions for national minorities or they would have voted differently, the SITA newswire wrote.

“In fact, out of some kind of duty, representatives of the Hungarian delegation voted against us,” Fico told the press, as quoted by SITA, adding that neither the French nor Belgian parties controlled their delegates’ voting and only a few people from these countries voted against Smer’s re-admission.

In the vote, 187 delegates approved Smer’s full membership while 14 voted against.

Fico added at the news conference that none of the top leaders of the European socialist parties raised a question about Slovakia’s national minorities. However, a special committee of PES will continue monitoring Slovakia for racist statements.

According to the Sme daily, what could have swung delegates at the Prague congress was the fact that Smer did not create a single coalition with SNS for the recent regional elections in Slovakia.

According to Kusý, social democratic parties in Europe are in a kind of crisis.

“It means that they gladly accept parties like Smer and they have to close one eye to some principles of social democracy,” Kusý said. “So if they had not wanted to tolerate Smer’s coalition with a nationalist party, now they closed both eyes suggesting that SNS is not as nationalist as it had seemed to them before.”

But according to Kusý, the action taken in Prague will not do much to change the party’s prestige at home.

Early December also marked the 10th anniversary of the founding of Smer and the party held a congress at which, along with highlighting the party’s achievements, Fico accused the press of spreading lies about Smer. He suggested that it is not unusual for the press to assume the role of political opposition.

Fico said that his party intends to use the next six months for construction of highways and dual carriageways and stressed that these projects are currently giving work to 6,000 Slovaks, saying the number will even increase, the SITA newswire wrote.

Mikuláš Dzurinda, the head of the Slovak Democratic and Christian Union (SDKÚ), compared Fico’s appearance at the Smer congress to hallmarks of the 17th Congress of the Czechoslovak Communist Party.

“Instead of an honest approach to reality, he resorted to unbelievable propaganda and concealing reality,” Dzurinda told SITA, adding that he thinks Fico is destroying Slovakia economically, socially and morally.

Regarding Smer’s metamorphoses, Kusý said that in terms of party programme it was at the beginning a so-called third-way party, as Fico labelled it, while today it declares itself to have a social democratic orientation.

“In fact, the ideological orientation is only a label because the party is very pragmatic in pursuing its own interests,” Kusý said.