Fall of the wall changed ties with the world

THE VELVET Revolution was a turning point in the relations of Czechoslovakia, and later its successor countries, with the rest of the world. The 20 years since the fall of communism, for most of which Slovakia and the Czech Republic have acted as two independent states, have been filled with successes – but also darker periods, when Slovakia faced international isolation. 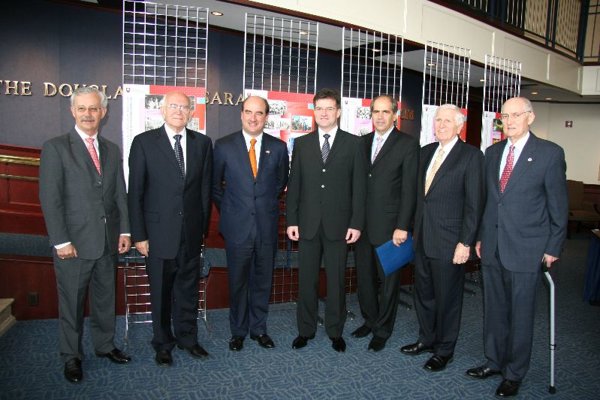 THE VELVET Revolution was a turning point in the relations of Czechoslovakia, and later its successor countries, with the rest of the world. The 20 years since the fall of communism, for most of which Slovakia and the Czech Republic have acted as two independent states, have been filled with successes – but also darker periods, when Slovakia faced international isolation.

To commemorate the Velvet Revolution and reflect on past Slovak-US relations, the
non-governmental Heritage Foundation organised a conference at its Washington, DC, premises entitled The Velvet Revolution: Twenty Years of Freedom in Central Europe – Slovak-U.S. Partnership Through the Eyes of Ambassadors. The speakers comprised mainly former Slovak ambassadors to the US, including Branislav Lichardus (1994-1998) and Rastislav Káčer (2003-2008), and US ambassadors to Slovakia, namely Theodore E. Russell (1993-1996), Ralph R. Johnson (1996-1999), Rodolphe M. Vallee (2005-2007) and Vincent Obsitnik (2007-2009).

The United States has played an important role in the statehood of Slovaks and Czechs far back into history, thanks to immigrants from central Europe who had become good American citizens willing to help the cause of self-determination of the Slovak nation, Slovak Foreign Minister Miroslav Lajčák said in his opening remarks to the conference. The real, institutional relations between independent Slovakia and the United States, however, have been built only since the split of Czechoslovakia in 1993.

“The success of the first encounters between the Slovak and US administrations after January 1993 can be easily attributed to a simple decision to align the future of Slovakia with European and transatlantic institutions,” Lajčák said.

After 1989, another milestone in recent Slovak history and foreign political orientation came in 1998 when the government of Vladimír Mečiar, which had brought the country to the verge of international isolation, was defeated in that year’s election and succeeded by a reform-minded administration.

“1997 was a clear eye-opener,” Lajčák said. “At the NATO summit in Madrid the alliance not only excluded Slovakia from its imminent enlargement but refrained from mentioning Slovakia altogether. And also our hopes for EU membership were sidelined until 1998.”

This double red light served as a wake-up call for many Slovaks, Lajčák said, adding that the international community, including the US, played an important part in the democratic changes during the past 20 years for which they should get credit.

“My impression when I arrived in late 1993 was that Slovakia was taking on an enormous challenge,” Ambassador Russell said. “Not only were they trying to correct the problems of communism from over 40 years. They also were trying to set up an independent state and I think the Czechs had all the cards there: they had the capital, they had this internationally famous president Václav Havel, and they even had the flag. But the good news was that Slovakia had made the determination that Slovakia wanted to join the West. The US and EU clearly wanted to help and provide assistance.”

Ambassador Johnson said the transition process has been sustained not only by the international community but to a large extent by civil society organisations that started working in the country after the Czechoslovak break-up. According to Johnson, it was up to the NGOs “to show people throughout the country that they could organise themselves in a way that would enable them to take control of their lives and have an impact on their environment”. Johnson said that it was exactly this strength of the NGOs that gave Slovaks the confidence to oppose the government which had caused the rejection of NATO and the EU.

The international community was there to hold out a roadmap to Slovakia to show what needed to be done in order to be eligible for NATO and EU membership.

“The people of Slovakia had what they call ‘sedliacky rozum’, the common sense, and as a result they’re the ones, much more than the international community, who deserve the credit for Slovakia being what it is today,” Johnson said.

However, according to Pavol Demeš, the director of the German Marshall Fund in Central Europe, not only in 1998 when this democratic breakthrough occurred but throughout the whole period Slovakia would not be the modern country that it is now without the support of the US.

“For me, US-Slovak relations have always been sincere, serious, in great style and [with the] spirit of success built in,” Demeš said. “And I think this made us the modern country which is now a part of the EU.”

Slovakia can be thankful for the fact that 20 years later the country is firmly anchored to the West and its relationships with the US are normal, he added.

Ambassador Branislav Lichardus, who served as the Slovak ambassador to the US just after the break-up, in 1994-1998, spoke about the first years of the Slovak representation in Washington.

“In the first five years of the existence of Slovakia our small embassy staff opened doors to the White House, to the US Congress, to the influential think tanks, to our Slovak-American compatriots and became a trustful institution representing Slovakia,” he said.