THE GLOBAL economic crisis has had a chilling effect on Japanese companies’ plans to invest in Slovakia. Nevertheless, Slovakia still views Japan as a potential source of foreign investment and is continuing to present itself as an attractive investment destination. 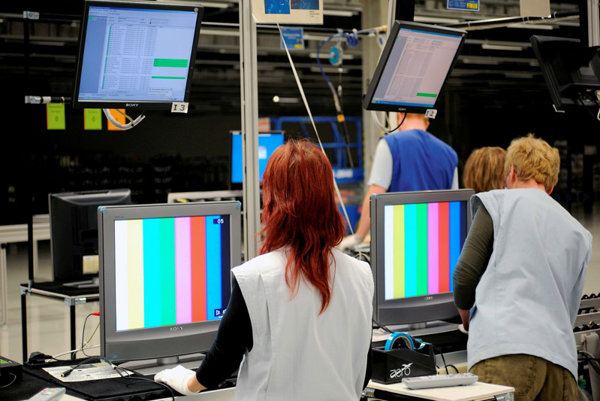 Sony has suspended its expansion plans in Slovakia because of the economic crisis. (Source: ČTK)
Font size:A-|A+  Comments disabled

THE GLOBAL economic crisis has had a chilling effect on Japanese companies’ plans to invest in Slovakia. Nevertheless, Slovakia still views Japan as a potential source of foreign investment and is continuing to present itself as an attractive investment destination.

“The current situation regarding the interest of Japanese companies in Slovakia is very much influenced by the crisis,” Peter Bohov, president of the Slovak-Japanese Chamber of Commerce (SJOK), told The Slovak Spectator. “Several Japanese companies that had been pondering expansion into central Europe as recently as last year have re-assessed their plans.”

The Slovak Investment and Trade Development Agency (SARIO) agrees, but says it has recently witnessed a very positive shift towards renewal of investment activities as well as brand new investment plans from Japan.

At the moment there are about 14 manufacturing, two construction and two service companies from Japan in Slovakia, according to Bohov. The most important investment has been that by Sony in the industrial park in Nitra, which has already drawn to Slovakia several small and medium-sized companies. Apart from Sony, there are also Panasonic and Yazaki, with Panasonic producing DVD recorders and Yazaki making cable systems for the automotive industry. Panasonic has two subsidies in Slovakia, Panasonic Electronic Devices Slovakia in Trstená and Panasonic AVC Networks Slovakia in Krompachy.

SARIO has been active in Japan for a long time. Its activities focus on Japanese investors, Japanese chambers of commerce, local partners, and state and trade organisations, but it is also active in helping Slovak companies establish themselves in the Japanese market. SARIO organised an investment seminar focused on the electro-technical industry in Osaka in October 2008, as well as a seminar on research and development in Tokyo in late November 2009. At this seminar,
representatives of SARIO, Japanese and Slovak companies, as well as Technical University of Košice presented current research and development in Slovakia and its potential for Japanese investors. In June it also organised a mission to Slovakia by the biggest Japanese textile importers, according to Jozef Marušík, project manager at the FDI section of SARIO’s Project Development Department.

“Our experience is that attracting Japanese investments is usually a process requiring long-term presentation of the country in Japan, provision of the latest information in the local language, via a website and publications and presentations and, especially, long-term cooperation with local partners,” Marušík told The Slovak Spectator, adding that SARIO has been successfully pursuing all of these. “We provide the latest information in Japanese on our website, which is also available in the Japanese mutation and we also provide detailed analyses of the investment environment in Slovakia in Japanese.”

During the last few years SARIO has also established contacts with the Japanese External Trade Organization (JETRO), the Kansai Economic Federation (Kankeiren), the chambers of commerce in Osaka and Tokyo, as well as some Japanese banks and other private entities, through which SARIO records the interest of Japanese investors in Slovakia.

For the time being SARIO is aware of three Japanese investors interested in making investments in the electro-technical and automotive industries in Slovakia, according to Marušík.

In the future SARIO wants to focus on attracting Japanese investments with higher added value, especially research and development (R&D) centres and others. This is one of the reasons that SARIO is intensifying cooperation between universities in Slovakia and Japan.

The Slovak-Japanese Chamber of Commerce also has some projects to boost ties between Japan and Slovakia in the pipeline.

“The chamber is preparing another commercial mission, Contracta 2010, in Japan,” said Bohov. “Two investment seminars in Tokyo and Osaka will be part of this mission, planned for April. The seminars will focus on renewable energy sources and Slovak businessmen will have the chance to meet Japanese companies active in this segment.”

According to the National Bank of Slovakia, the aggregate investments of Japan companies in Slovakia up to the end of 2008 amounted to €70 million.

Sony has been operating in Slovakia since 1996 and has so far invested approximately €73 million. It employs about 3,000 people in its production plant.

“Since 1996 the company has undergone dynamic development with regards to its number of employees as well as the production programme,” Helena Windisch of Sony Slovakia told The Slovak Spectator. “The company is now based in Nitra, where its Nitra Technology Center – i.e. the production plant for manufacturing Bravia-brand LCD TVs – is located. Sony’s distribution centre is also in Nitra.”

Sony had planned to expand production in Nitra, but due to the crisis it suspended that plan in December last year. According to media reports, Sony had intended to invest a further €167 million in Nitra. According to Windisch, the investment plan for Nitra remains frozen.

Japan’s Mitsui Sumitomo Insurance Group entered the Slovak market in April 2009. The Slovak unit is the insurer’s first completely functional office in central and eastern Europe, the SITA newswire wrote. The group considers its Slovak subsidiary an essential base for the region, as the group plans to expand further into the Czech Republic, Hungary, and maybe Poland. Slovakia will serve as its hub for operations in the region. The company is engaged in commercial insurance activities including insuring property, technical risks and liability, and transportation.

In October Tokyo-based Mitsubishi Plastic, via its Nitra subsidiary Dia Moulding Slovakia, opened a plant to produce plastic frames for the screens of TVs manufactured by Sony, according to SITA. It was the fifth subcontractor to Sony to set up in Nitra. Sony had already attracted Nitra-Sever, the European division of the Japanese Royka Group; Japan’s Meiki; South Korea’s Daidong Slovakia; and Spanish firm Farguell to the local industrial park.

Dia Moulding Slovakia currently employs 60 people, with plans to employ 200 when its plant is in full production in 2010. The annual capacity of the €22-million plant is 2.5 million frames per year.

In early November the Slovak Economy Ministry announced that an unnamed Japanese investor was planning to set up a facility in the industrial park in Kechnec, eastern Slovakia, according to SITA. The ministry said that the investor was from the aero industry and would focus on research and development, which would create jobs for graduates in particular.