ART and food are universal languages that can be understood without the need for interpreters or dictionaries, however distant their countries of origin might be. This is an opinion clearly held by the diplomatic representatives of the Republic of Korea in Bratislava, who have regularly organised programmes focused on both these two areas. It seems their efforts have borne fruit. 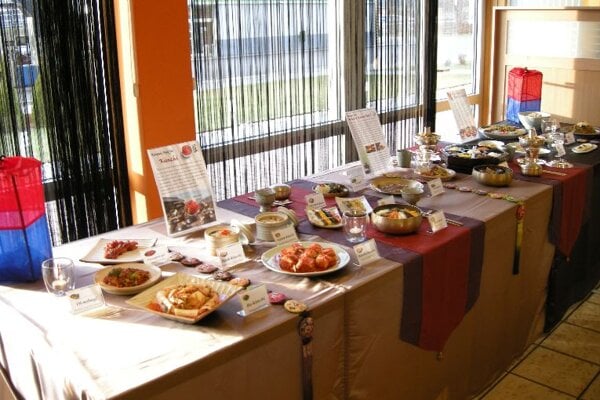 ART and food are universal languages that can be understood without the need for interpreters or dictionaries, however distant their countries of origin might be. This is an opinion clearly held by the diplomatic representatives of the Republic of Korea in Bratislava, who have regularly organised programmes focused on both these two areas. It seems their efforts have borne fruit.

Press releases from the Korean Embassy to Slovakia reveal an ever-growing number of cultural events. Founded in 2007, the mission has developed a significant network of partners during the past two years, and each new activity attracts more people.

In February, for example, it hosted the first Korean Food Festival, intended to be the start of a new tradition.

“The participants had the rare opportunity of being served a full-course traditional Korean meal and watch a professional Korean cook preparing kimchi, our most popular dish,” said Jaesoon Hahn, counsellor at the Korean Embassy, adding that more than 100 people attended the event. “We received extremely positive feedback from our Slovak friends, who said that they had very much enjoyed tasting Korean food and asked for more similar programmes.”

Another highlight of the embassy’s cultural calendar was a concert given by the Korean-Austrian Philharmonic Orchestra held in the Slovak capital in November, which drew an audience of around 500 attendees, and the Bratislava Korean Film Festival which attracted more than 300 festival-goers.

In the upcoming period, follow-ups of some of this year’s events as well as some completely new programmes will be offered by the embassy, but the schedule is still being finalised, Hahn stated.

With regard to the future, the counsellor expressed her belief that the popularity of Korean culture in Slovakia will continue to rise, especially after a recent major diplomatic triumph that she considers to be “one of the main achievements in the field of Korean-Slovak cultural cooperation”: the establishment of the Korean Studies Chair at Comenius University in Bratislava.

“So far, about 50 students have benefited from the course offered by the department,” she told The Slovak Spectator. “I am sure that this will contribute to deepening the understanding of Korean culture among local people, including some of the perceived cultural differences between Korea and Slovakia.”

Because, as she said, there are still many features of this Asian Tiger that Slovaks have not yet discovered.

“Slovaks are familiar with Korean companies operating in Slovakia, such as Kia Motors or Samsung Electronics, but their knowledge usually does not extend to a genuine understanding of the dynamic and vibrant society of South Korea, reconstructed after total devastation 60 years ago, let alone to all aspects of the country’s unique cultural heritage,” Hahn remarked.

“That is why the promotion of the culture of South Korea as well as her modern achievements is one of our most important priorities.”

On the other hand, the two nations do not have to start seeking common ground from scratch, the diplomat concluded, as Slovakia and Korea have already built increasingly close ties.

“There is no such thing as ‘distant culture’ in the age of globalisation,” said Hahn. “We have already succeeded in establishing a mutually beneficial relationship based on common economic interests. That is an excellent foundation for true friendship, which has already started growing between our two countries.”