SEPTEMBER Bratislava Castle is currently undergoing renovation, and has been given new night-lighting and a new colour, the ČTK newswire wrote. 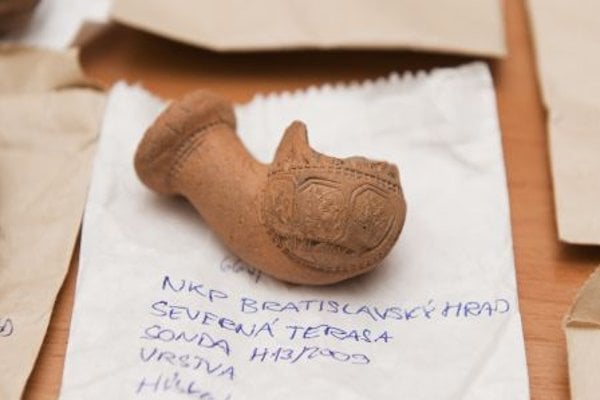 SEPTEMBER Bratislava Castle is currently undergoing renovation, and has been given new night-lighting and a new colour, the ČTK newswire wrote.

But in addition, during works in August, archaeologists uncovered remnants of Roman buildings and Celtic coins that they say prove the present-day Slovak capital was in Roman times an important central-European Celtic power centre.

Structures dating back to the 1st century BC were discovered during the renovation, as were golden and silver coins – dubbed “golden treasure” by the Slovak media – bearing the inscriptions ‘Biatec’ and ‘Nonos’.

“These were the names of first Celtic dukes who reined on our territory and minted coins with their names inscribed,” the daily Sme quoted archaeologist Margaréta Musilová as saying.

In the castle complex, ancient walls, preserved paving, and shards of pottery from amphorae have been unearthed. The head of the Bratislava Institute for the Protection of Monuments, Ivo Štassel, considers the findings unique.

During Roman times, Bratislava was the site of a Celtic oppidum (a Latin word meaning the main settlement in any administrative area of ancient Rome) that stretched across dozens of hectares.

Slovakia is not very rich in structures from the Roman period, because the border of the Roman Empire was formed by the River Danube. The most well-known monuments are remnants of military forts or encampments.