Cities plan to celebrate, despite crisis

THE CRISIS looms from behind every corner and, here and there, Slovak municipalities have also been forced to tighten their belts wherever they can. New Year celebrations are no exception, but organisers are promising that the programmes they have prepared will – in spite of the more limited resources – be as much fun as ever. 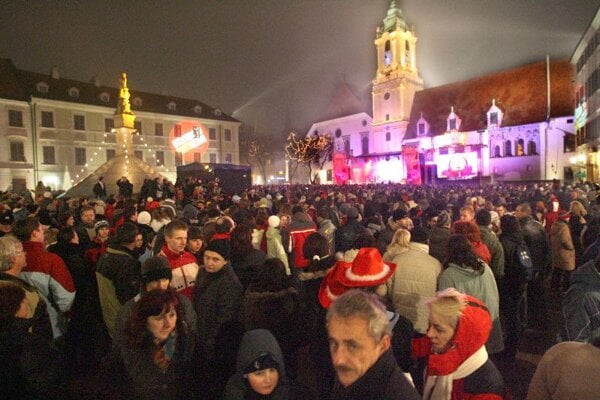 THE CRISIS looms from behind every corner and, here and there, Slovak municipalities have also been forced to tighten their belts wherever they can. New Year celebrations are no exception, but organisers are promising that the programmes they have prepared will – in spite of the more limited resources – be as much fun as ever.

On the evening of December 31 each year, regional capitals throughout the country traditionally hold spectacular festivities to bid farewell to the old year and welcome in the new. Compared to 2008, however, most of them have had to trim their budgets in the face of tougher economic conditions.

Bratislava’s celebrations will cost around €120,000, 25 percent less than last year’s. In fact, it is the lowest budget in 10 years.

Those who are planning to spend Silvester, as New Year’s Eve is known in Slovakia, in the streets of Bratislava, need not be disappointed, though, said Milan Vajda, the city council’s spokesman.

“The programme will be as long and as rich as before,” he told The Slovak Spectator. “We have once again prepared three separate party zones with concerts by some of the top Slovak musicians: in the Main Square, in the neighbouring Hviezdoslavovo Square and at the embankment along the Danube. Unlike in other towns, the programme will kick off in the early afternoon, and that is not counting some accompanying morning events.”

As Vajda explained, the budget cuts have affected some technical details, such as special effects.

But thanks to cost-saving measures as well as some donations, Bratislava still launched www.silvester.bratislava.sk, a website with details about the event in both Slovak and English.


Banská Bystrica has also opted for less expensive celebrations this year. The city’s fireworks display will be 50 percent cheaper than in 2008, and the celebrations will start three hours later than usual, at 22:00.

According to Veronika Petríková from the local Culture and Leisure Park, the event will certainly not be unattractive, as the restricted funds made the organising team even more inventive.

“We have bet on a different approach and I dare say Banská Bystrica’s New Year’s Eve will be the most original of all,” she stated. “Students of the Academy of Arts will, for example, be carving sculptures out of ice blocks, and a group of hardy fellows will be bathing in an ice-water pool, from where they will count down the final seconds.”

As for Slovakia’s eastern metropolis, celebrations there will not be radically different from those held in 2008. Košice has allocated approximately the same amount for this year’s celebrations as it has in the past, around €14,000.

“As usual, we have prepared a colourful programme suitable for all ages, from folklore to opera to jazz,” Jaroslav Kerner from the Košice City Council told The Slovak Spectator.


He explained that the city will save money elsewhere, a good example being a recent e-auction through which the city chose the supplier of the New Year fireworks. It was the first time that Košice had used an electronic public procurement system.

“Thanks to this call, we saved 5 percent compared to the lowest written offer,” said Kerner.

Košice’s age-old rival, the nearby city of Prešov, has also managed to balance the budget with minimal cuts, largely due to generous private funding, said Katarína Pirohová, spokesperson for the city’s mayor.

“The cost of fireworks, for example, has been partially covered by a sponsor. That has enabled us to prepare an even more spectacular show than at past events,” she remarked. “Prešov will, for the first time ever, have the opportunity to enjoy pyro-musical fireworks – that is, fireworks synchronised to music.”

Moreover, some of the artists appearing on the night have given up their fees to help the city make ends meet.

“The only thing we now need is favourable weather,” she concluded with a smile. “For the rest, we are not worried at all. The enchanting atmosphere of New Year’s Eve is enough to make people feel like one big family.”