A BIZZARE story has emerged involving a bungled airport security operation at the international airport in Poprad, north-eastern Slovakia, which resulted in high explosive being inadvertently smuggled into Ireland on board a flight to Dublin over the New Year period. It came only days after the failure of an alleged terrorist plot to detonate a device on an international flight from Amsterdam to Detroit, which was supposed to have led to increased vigilance at airports worldwide. 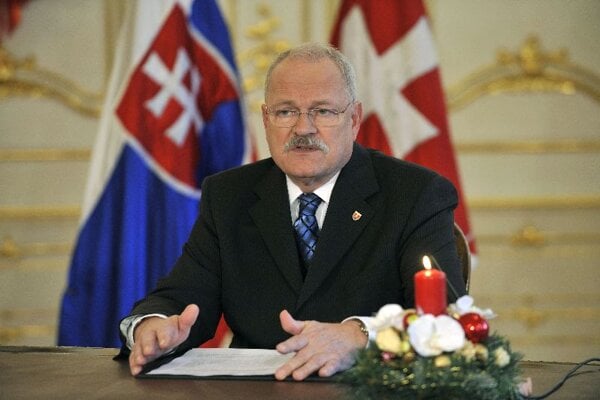 The director of the Poprad-Tatry airport shows the telex message the airport sent to the Dublin airport on January 2 to a press conference. (Source: SITA)
Font size:A-|A+

A BIZZARE story has emerged involving a bungled airport security operation at the international airport in Poprad, north-eastern Slovakia, which resulted in high explosive being inadvertently smuggled into Ireland on board a flight to Dublin over the New Year period. It came only days after the failure of an alleged terrorist plot to detonate a device on an international flight from Amsterdam to Detroit, which was supposed to have led to increased vigilance at airports worldwide.

Amid heated discussion about the renewed terrorist threat and the need for stricter airport controls and body scanners, the story of a man unwittingly transporting highly dangerous explosive, which had been planted in his luggage by Slovak police, by plane from Slovakia to Ireland immediately hit the headlines around the world. As The Slovak Spectator went to print the affair had already resulted in the resignation of a senior police officer.

According to Slovak police, during a routine training exercise involving police dogs at Poprad Airport on January 2, an officer from the Slovak Border and Foreigners’ Police put two pieces of a high explosive, hexogen (RDX), which experts say is more powerful than TNT, among the luggage of passengers travelling on a Danube Wings airline flight from Poprad to Dublin, Ireland.

The dogs succeeded in finding both pieces, but the policeman accidentally left one of them, a package containing 10 - 90g of the substance, among the luggage. When he realised his mistake, he notified the airport administration but not his superiors, whom he informed only on Monday January 4, the SITA newswire reported.

The explosive, attached to a backpack, was then unwittingly carried by a Slovak citizen back to his home in Dublin. The media reported that the passenger, who did not notice the package, is a 49-year-old electrician working in Dublin who was returning from his Christmas holidays in Slovakia.

The Slovak police admitted their mistake, but said Dublin airport had been informed about the presence of the explosive on the flight from Poprad and failed to find it among the passengers’ luggage upon its arrival in Dublin. However, the Breaking News portal quoted a spokesperson for Dublin airport saying that they had not received any notification until Tuesday morning.

The director of Poprad Airport, Ivana Herkeľová, told The Slovak Spectator that the airport had informed its Irish counterpart about the explosive after the departure of the plane.

“The plane departed at 12:07 and the telex message from SITA [a communication network used by airlines and airports] was sent at 12:32,” Herkeľová said. “Apart from that, we contacted the captain of the aircraft after he landed in Dublin and told him that we had sent the message [to Dublin]. Dublin Airport was notified also by the crew and the second pilot of the plane was even present at the unloading of the luggage. However, the explosive sample wasn’t found.”

However, Danube Wings issued a statement saying that the cabin crew had not been notified about the presence of high explosive on board the plane.

“The crew of the aeroplane was informed after departure from Poprad-Tatry Airport from the control tower that a harmless sample for dog training remained in one piece of checked-in luggage on the plane,” the statement of Danube Wings reads. “This information wasn’t in conflict with the security rules and didn’t prevent the continuation of the flight, otherwise the pilots would not have continued flying, according to the security rules of Czech Airlines [which operates Danube Wings flights].”

The head of the Slovak Border and Foreigners’ Police, Tibor Mako, told a press conference at Poprad Airport on January 6 that the lives of the passengers on the plane had not been at risk because the explosive is not hazardous on its own, and would require additional components to function as a bomb.

The main Irish and world media reported on the incident on January 5 after the Irish police, notified by their Slovak counterparts, closed two streets in Dublin around the house where the man who unwittingly carried the explosive resides and sent experts to dispose of the explosive.

According to the news website of Ireland’s public broadcaster, RTÉ, which was the first news source to report on the incident, adjoining homes and businesses were evacuated during the operation as the Irish Army Explosive Ordnance Disposal Unit removed the explosive for further analysis. The Slovak citizen was arrested at the scene, but was later released without being charged once Irish police were satisfied that he was innocent.

Mako said, as quoted by SITA, that he found the actions of the Irish police surprising, as his officers had informed their Irish counterparts about the location of the explosive and the circumstances of how it got to Dublin.

The Irish Department of Foreign Affairs said the Slovak Minister for the Interior had conveyed his government's profound regret for the incident to Irish Justice Minister Dermot Ahern. Ahern said he was very concerned about the fact that the Irish police were not alerted for three days and has asked for a full report, RTÉ reported.

A spokesperson for the Slovak Interior Ministry, Erik Tomáš, confirmed on January 6 that Interior Minister Robert Kaliňák had spoken with Ahern by telephone the day before and had also called the Slovak citizen in whose luggage the explosive was planted in order to apologise to him.

“We regard the whole incident to be an individual professional failure of a police officer for which he will most likely face a disciplinary proceeding,” Tomáš wrote in a statement to the media. He also wrote that the minister would not hold the superiors of the police officer responsible, as they were notified about the problem after a delay of two days, after which they contributed to resolving the problem.

Tomáš said that Kaliňák regarded the Chief of the Border Police Mako, who had offered to resign, as an experienced expert who had proven his worth a number of times. However, after criticism of the police and the minister mounted on Thursday, January 7, Kaliňák abruptly changed his mind and accepted Mako’s resignation.

The ministry said it had suspended the kind of explosive detection training used in Poprad following the incident.

Slovak opposition parties reacted immediately to the scandal with strong criticism. The biggest opposition party, the Slovak Democratic and Christian Union (SDKÚ), announced it would try to initiate a session of the parliamentary committee on defence and security, so that deputies could hear the explanation of the interior minister.

The Christian Democratic Movement (KDH) chairman Ján Figeľ called on the interior minister to take steps to stabilise the situation and then resign from his post.

“The scandal reflects severe failures connected with the violation of the law, it has an international dimension and significantly harms Slovakia abroad,” Figeľ said, as quoted by the TASR newswire.

Meanwhile, the world media including the BBC, CNN, the Guardian newspaper, and all the leading Irish media, reported on the story. All of them at first mistakenly identified the Slovak airport involved to be in Bratislava instead of Poprad.

The foreign media interest was boosted by the fact that it came only days after many countries had stepped up airport security following an alleged attempt by a passenger on a Christmas-Day flight from Amsterdam, in the Netherlands, to the US city of Detroit to detonate explosives attached to his body.

However, Herkeľová told The Slovak Spectator that the training exercise which led to the incident was not related to the events in the USA, and that it was a routine procedure by the border police.

The European Commission has requested information about the incident from the Slovak authorities and will get involved if flaws are found in the actions of the Slovak police, Fabio Pirotta, spokesperson for the European transport commissioner, said.