SLOVAKIA’S electronic highway toll collection mega-project has been bumpy from its very inception. Nevertheless, the system – with a price tag of over €850 million – began operations on January 1, 2010. While its operator calls the launch of e-toll collection successful and problem-free, transporters and truck drivers lining up in 10-hour queues at border crossings are frustrated and are calling the launch a chaotic failure. 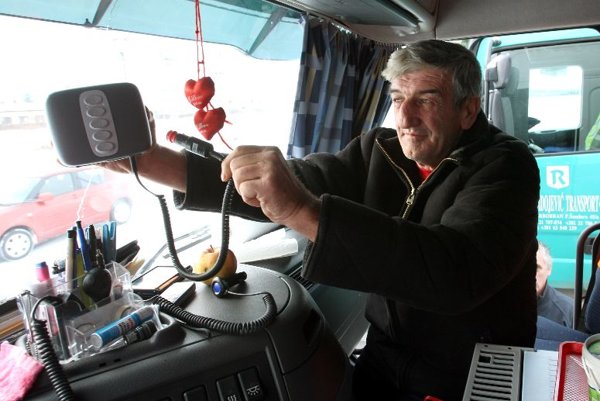 SLOVAKIA’S electronic highway toll collection mega-project has been bumpy from its very inception. Nevertheless, the system – with a price tag of over €850 million – began operations on January 1, 2010. While its operator calls the launch of e-toll collection successful and problem-free, transporters and truck drivers lining up in 10-hour queues at border crossings are frustrated and are calling the launch a chaotic failure.

Operators of vehicles heavier than 3.5 tonnes, buses and other vehicles holding more than nine people including the driver, are now charged by the kilometre for driving on a total of 2,032 kilometres of Slovak highways and first-class roads. Highway transporters have been calling on the state to suspend the system’s operation for six months, saying it has not been sufficiently prepared.

The Union of Road Carriers (UNAS) launched a petition on January 4 demanding that the state cut its excise tax on fuels as well as its road tax as a form of compensation for what they call far too expensive highway tolls. The union is also demanding that the state clearly marks the toll-road sections and has called on Slovakia’s parliament to meet promptly in a special session to discuss their demands.

If the union finds a deaf ear with the government, the transporters say they are ready to beef up their protest activities around Slovakia.

The road carriers had originally threatened to gather at petrol stations and discuss their demands at these sites, but no major public protests were reported.

“We are giving the state seven days to negotiate with us,” Jaroslav Polaček, a spokesman for the carriers union, told media at a press conference on January 6 – adding that the union will also address the European Commission.

“Unfortunately, this is not the case,” said Páleš.

According to Páleš, the transporters actually do not know when they are travelling on charged highway sections since these are not marked with signs. The carriers also claim that they are unable to pay with fuel cards although, according to Páleš, these had been listed as one of the optional forms of payment.

UNAS insists that there are also problems with the supply of onboard units (OBUs), the vehicle-mounted device which is necessary for the actual calculation of the vehicle’s toll. The transporters also say the OBUs are miscalculating the toll for certain road sections.

SkyToll, the builder and the operator of the system, said that everything is working just fine.

“I am glad that I can announce successful operation of the e-toll system and a problem-free launch of all the processes,” said Matej Okáli, general director of SkyToll, on January 3 in an official release sent to media. “Along with the collection of tolls, the registration of transporters continues smoothly too.”

SkyToll spokeswoman Lenka Lendacká said that there are 13 distribution spots at border crossings where foreign hauliers can buy the onboard units. Foreign carriers can access information at www.emyto.sk in six languages.

Okáli admitted that the company received 28 complaints in the first three days of operation, most pertaining to undelivered OBUs. He said that SkyToll is reviewing each complaint and would respond within the period set by the law.

The e-toll collection system is based on GPS-GSM satellite technology. The system includes six highway gates and 40 control gates on parallel first-class roads.

SkyToll registered more than 330,000 transactions and collected €138,398 in tolls in the first three days, with 8,600 vehicles carrying out at least one transaction. The vehicles used a total of 1 million kilometres of charged road sections, the SITA newswire wrote.

Czech transporters do not share the opinion that the launch was smooth. Two days after the e-toll system went into operation, the Czech association of transporters said that Slovakia had failed to organise it properly.

“Several-kilometre long and more than ten-hour queues at border crossings with Slovakia are neither demonstrations nor reminders of past years, but a result of an organisational failure linked with the launch of electronic toll collection,” Martin Felix, of the Czech transporters' association Česmad Bohemia told SITA.

Česmad Bohemia is comprised of more than 2,000 business entities with more than 20,000 vehicles. The association complained that even those transporters who had ordered and paid for the OBUs months ago could have not avoided the complications because they still have not received them. Now they have to wait in queues to comply with the law and to “contribute not small amounts” to Slovakia for using its highways, said Felix.

The Sme daily wrote that Slovak Transport Minister Ľubomír Vážny and the head of the National Highway Company (NDS), Igor Choma, were taking vacations during the launch of the system. Sme also reported that Vážny’s Czech counterpart Gustáv Slamečka has already inquired about the long queues at border crossings.

A three-kilometre traffic jam of trucks developed on January 4 in northern Moravia in the Czech Republic at the border crossing near the village of Mosty u Jablunkova, a site where there are not even toilets available for drivers, Sme wrote.

The mega-project received extensive negative publicity when the contract to construct a nationwide satellite-based system was awarded to the sole remaining bidder, SkyToll – the successor company to a consortium which had made the most expensive bid. The European Commission subsequently asked for more information as to why three bidders had been eliminated from the final round of the high-value tender.


Slovakia’s Association of Road Transport Operators (Česmad) signed a contract with SkyToll to operate contact centres in Slovakia’s eight regions as well as 13 distribution centres, more than 90 distribution centres in all, where truck and bus operators could acquire the required onboard units which connect their vehicles with the satellite system.

The Union of Road Carriers (UNAS) has alleged that Česmad is supportive of the toll system because the association can charge €112, not including VAT, for the installation of OBUs based on its contract with SkyToll.

SkyToll reported on January 5 that 66,453 vehicles had been registered in its system up to that date and that vehicles had driven 1,457,741 kilometres on toll-road sections.