A bridge towards Roma inclusion

WALKING across Bratislava’s New Bridge instead of driving over it by car can sometimes turn out to be much more enjoyable. Apart from enabling you to avoid one of the frequent traffic jams, the stroll can take you to a completely different world, which you would hardly expect to find among the bridge’s grey concrete pillars. Such was the case in recent weeks, when this futuristic construction landmark, also known as the UFO bridge, hosted an interesting photographic exhibition. 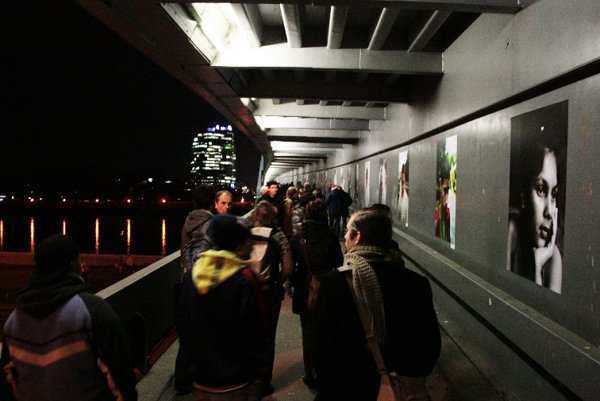 WALKING across Bratislava’s New Bridge instead of driving over it by car can sometimes turn out to be much more enjoyable. Apart from enabling you to avoid one of the frequent traffic jams, the stroll can take you to a completely different world, which you would hardly expect to find among the bridge’s grey concrete pillars. Such was the case in recent weeks, when this futuristic construction landmark, also known as the UFO bridge, hosted an interesting photographic exhibition.

Entitled Aven Romale, or Come On, Gypsies, the event was the fruit of co-operation between the Royal Netherlands Embassy in Bratislava and the Košice 2013 European Capital of Culture (ECOC) team.

Five months after its premiere in the eastern metropolis, the exhibition was moved to Bratislava on the occasion of International Human Rights Day, December 10.

“When the embassy was planning an activity for International Human Rights Day, we thought Aven Romale would be a perfect match for the topic,” said Yvette Daoud, the Dutch Embassy’s deputy head of mission. “By the way, we chose to focus on the position of the Roma because Slovakia holds this year’s presidency of the ‘Decade of Roma Inclusion’ and also since the theme for International Human Rights Day 2009 was ‘diversity’.”

On December 10, the display was installed above the Danube, on the New Bridge. It is not that Bratislava lacks sufficient exhibition halls, but the organisers wanted to make the photographs accessible to as many people as possible.

“It is not by accident that Aven Romale takes place at the New Bridge,” Daphne Begsma, Dutch Ambassador to Slovakia, said at the opening. “This structure connects the historical centre with the newer parts of Bratislava, just as our mental, symbolic bridge should connect majority to minority or one’s stereotypes to the reality of others.”

The uniqueness of the display, however, does not lie only in its unusual setting. The authors of a majority of the photographs were 22 Roma children aged between 4 and 17 from Luník IX, the infamous Roma ghetto in Košice, who had taken part in a three-week workshop led by Dutch artist Rob Houkes in summer 2009. The participants not only took the photos, but also learned how to process the film in a darkroom.

“Our aim was to invite young Roma people from Luník IX to show us through the lens of a camera who they are, what they think and how they view the world around them,” Houkes told The Slovak Spectator. “Then we put together the pictures they had taken, in black and white, and my portraits of them, in colour, so as to build a faithful representation of their personalities.”

Though Houkes is a professional photographer and his pupils were only beginners, he said that the workshop enriched him just as it enriched the children.

“I must say I was totally surprised by the images they made as well as by their approach,” he said. “It wiped away all stereotypes I probably once had. I found out that the people I worked with were extremely friendly, open and self-confident which is a miracle, given the circumstances in which they have to live. So I think everybody, including myself, found the workshop a very special and unforgettable event.”

Houkes also added that Roma people's thoughts and feelings are surprisingly close to those of the majority population.

“In one way, their perception of reality is a little different, because Roma have had to face discrimination and exclusion from society for many, many years, not to mention the holocaust, which is of course something that changes your view of life,” he remarked. “On the other hand, I have learned that Roma are people like you and me. They enjoy their lives, they love their hometowns and they have the same pleasures and expectations like you and me. That is what the exhibition is showing.”

Aven Romale remained open until last week. Those who missed it, however, need not lose heart. Both the Dutch embassy and Košice 2013 promise more activities like this to follow.

“The Royal Netherlands Embassy has been running several projects in its long-term commitment to Roma issues and matters of human rights,” Jana Kadlecová, press and political assistant at the embassy told The Slovak Spectator. “In the following months, we are planning to continue supporting similar initiatives.”

As for the Roma children from Luník IX, Houkes stated that Aven Romale was certainly not the last project in their neighbourhood.

“We are very satisfied with the results of Aven Romale, but our evaluation has shown that there is a need for long-term involvement in this kind of activities and in this environment, rather than one-off events,” he said. “We are therefore planning to realise more events in the field of social arts and we hope that some of them will also be joined by other NGOs. In 2010, for example, a street dance summer academy is expected to be held in Luník IX.”

As Potiron told The Slovak Spectator, working with Roma citizens is only a small part of large-scale efforts towards better Roma inclusion.

“We do not pretend by such projects to solve social or political problems of this community,” he underlined. “We simply want to give those people equal opportunities for developing their creative skills and tools for self-expression, and offer them more possibilities to have quality free time just like other Slovaks.”