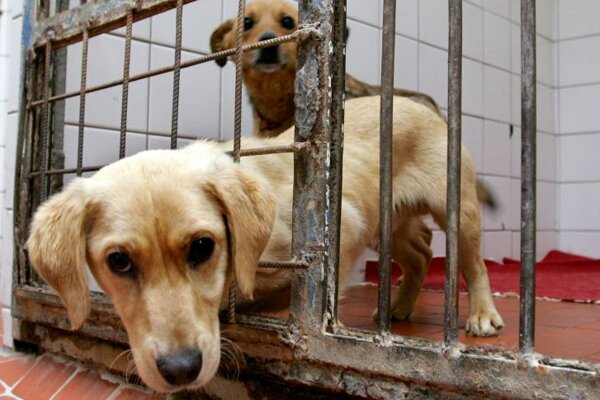 “We organised a collection of animal food, blankets, and other necessary items that could help our nurslings survive the harsh winter,” centre spokesperson Edita Gardonová said.

The rescue centre was open during Christmas, and on Sunday, December 27, it organised small get-togethers for the people that help with the animals and take them for walks. For Christmas dinner, the animals ate chicken meat with pasta.

But the holiday season also brings many more animals to the rescue centres – those given as ‘unwanted gifts’, or which are wanted but, after the school holidays end, cannot be taken care of.

Activists belonging to the Union of Mutual Help of People and Dogs (Únia vzájomnej pomoci ľudí a psov) in Košice said that the number of abandoned animals in the city has risen steeply.

“On average, we manage to find a new home for an animal within four to six weeks, but the number of abandoned animals keeps soaring, so we are trying to persuade people to keep the animal at home until we find it a new home,” said Romana Šerfeldová, chairperson of the union’s board.

Šerfelová added that each town and city should finance and take care of animal rescue centres, as activists do a lot of good not just for the animals, but also for citizens in general.


In Košice, the union is building a new centre in the suburbs, which should have space for 250 dogs and cats. The union will pay a symbolic rent to the city of Košice of €0.03 and will be given the premises in 2025.

Several other animal rescue centres have already embraced new guests, just a few days into the new year. However, the biggest interest is expected after January 11, when the school holidays end. Gardonová of the Bratislava centre said that the greatest number of pets which have turned up this year ran away from their homes in fear during New Year fireworks displays, and might still be returned to their owners.

The rescue centre in Piešťany has also received new dogs, including seven Rottweiler puppies, since Christmas Eve. The head of the centre, Ľubomíra Baleková, says that an increasing trend is for breeders to bring in puppies that they are unable to sell. This trend has been confirmed by animal rescue centres in Komárno, Skalica and Prievidza. The chairman of the the Animal Friends (Priatelia zvierat) association in Prešov, Michal Haško, added that, unfortunately, fewer and fewer abandoned animals are being adopted by new owners.

“We have almost no adoptions; it cannot be compared to last year,” Agnes Jelínková of the Komárno centre said.

The head of the Skalica centre, Romana Šenková, said that more new owners now come from Austria than from Slovakia.