PROTESTING truckers got back into their parked trucks and returned to the roads: but it took a prime ministerial promise to lower excise tax on diesel fuel to get them on the move. After much prodding, Prime Minister Robert Fico yielded to the truckers on January 11 after massive protests against the electronic highway toll collection system, which was launched in Slovakia on January 1, 2010. 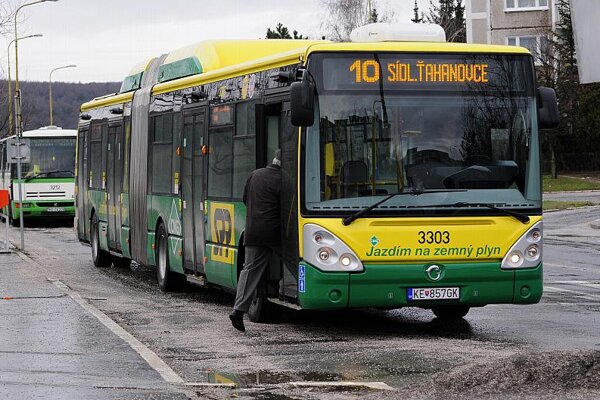 The new tolls are pushing up some bus fares. (Source: TASR)
Font size:A-|A+

PROTESTING truckers got back into their parked trucks and returned to the roads: but it took a prime ministerial promise to lower excise tax on diesel fuel to get them on the move. After much prodding, Prime Minister Robert Fico yielded to the truckers on January 11 after massive protests against the electronic highway toll collection system, which was launched in Slovakia on January 1, 2010.

The protest organised by the Union of Road Transporters (UNAS) only a few months ahead of national elections was among the strongest-ever demonstrations of public opposition to the policies of the Fico government. A heap of manure, which one of the protesters left in front of the Slovak Cabinet Office, was pictured on the cover pages of the national press.

Speaking at the Presidential Palace, Fico, assisted by President Ivan Gašparovič and Speaker of Parliament Pavol Paška, promptly found a scapegoat to blame for the culmination of tensions. After their specially summoned meeting, the trio – Slovakia’s top three constitutional officials – condemned the media and the opposition for what they called support for the activities of the discontented transporters, who had blocked, among other thoroughfares, Bratislava’s Rožňavská Street.


“If someone incites violation of laws it is a road to hell,” Fico told a press conference, adding that this dangerous phenomenon is manifested in support for everything – even breaking laws, disorder and chaos – as a way of fighting against his government.

Speaker Paška said that the government would not yield to any pressure and that it would be unfortunate if for those couple of months until the parliamentary elections instead of a “correct political competition” someone were to run around with a petrol canister and matches just because they were unable to offer a real alternative.

Gašparovič’s contribution was to say that the protest had not brought anything positive to Slovakia.

Yet opposition parties said that it was precisely such talk that constituted political campaigning, dubbing the top state trio’s talk ‘annoying theatre’. The leader of the Christian Democratic Movement (KDH), Ján Figeľ, said that the Fico-Gašparovič-Paška performance was an clear example of them abusing their positions. Slovak Democratic and Christian Union (SDKÚ) deputy chairman Ivan Mikloš said that Fico had acted like a coward when, after yielding to the protesters, the following day he roared from the Presidential Palace that the activities of the truckers were illegal.

Under the new e-toll system, which came with a price tag of over €850 million, operators of vehicles heavier than 3.5 tonnes, buses and other vehicles holding more than nine people including the driver, are now charged by the kilometre for driving on a total of 2,032 kilometres of Slovak highways and first-class roads. While the creator and operator of the system, SkyToll, described the launch as smooth, transporters queued for up to 10 hours at border crossings and called it faulty and unfair.

In order to cover the hole that cutting the excise tax on fuel is likely to open up in the state budget, Fico has announced a plan to merge some ministries and thus save costs. By the time The Slovak Spectator went to print, no information had emerged about exactly which ministries would be merged, but it was already clear that the plan promised to generate a tug-of-war between the partners in the current ruling coalition.

UNAS said on January 12 that the protest action had met its objectives since most of the demands would be fulfilled. The transporters demanded cuts to the excise tax on gasoline; toll charges to be lifted from 1st category roads until the sections are fairly divided; a reduction in fines for wrongly installed onboard units; and signs clearly marking the tolled sections of first-category roads to be erected by the end of June 2010.

The excise tax on diesel should drop from €0.481 per litre to €0.391 per litre by the end of January, which should push down diesel prices at petrol stations from the current €1.14 per litre about to €1.01.

The aim is that tolled vehicles pay only for the kilometres they actually drive and not for whole sections, with drivers receiving invoices with detailed information on the sections driven and resultant charges.

Polaček said that the protest has also been about the fact that the electronic toll collection system does not work well.

Slovakia’s Association of Road Transport Operators (Česmad) said the result of the protest was a success for all road transporters, regardless of whether they participated in the protest or not. Peter Halabrín said that Česmad shared the demands of UNAS but preferred different means.

UNAS has alleged that Česmad, which signed a contract with SkyToll to operate contact centres in Slovakia’s eight regions as well as 13 distribution centres, supports the toll system because the association can charge €112, not including VAT, for the installation of OBUs according to its contract.

Operators of bus lines are among those who say the e-toll will have an impact on their operations. Some have considered cancelling lines, while at the same time confirming an increase in bus fares.

“The electronic toll has generated costs for transporters that they are unable to carry and it is necessary to fully reflect these in the fare,” Eva Vozárová, spokeswoman of bus operator Slovak Lines, told The Slovak Spectator.

The company increased its fares as of January 11 on several long-distance lines.

“We are still doing the calculations and in the forthcoming days, or weeks at the latest, fares will gradually increase on other long-distance or inter-state lines as well, depending on particular lines or their routes,” Vozárová said. “After [we receive] the first invoices for the electronic toll, further corrections could be made.”

According to Vozárová, the fare increase is sensitive and thus the company will treat each line individually.

“We are not making a flat price hike but rather making very detailed calculations,” Vozárová said, adding that this is why on one line between different stops there might be different price hikes. “We estimate that fares will increase by 10 percent on average.”

However, prices on inner-city and short-distance lines are regulated.

Some bus transporters had already narrowed their operations on long-distance and international routes last year in response to the global economic downturn. For example, bus operator SAD Žilina cut some lines, especially to destinations in the Czech Republic, blaming cuts on a drop in the number of passengers.

The company provides most of its services based on contracts with Žilina Region.

“All the expenses linked to the installation of onboard units and the subsequent payment of the toll is an item the refund of which can be requested from the procurer and thus the towns and municipalities will have to decide what approach they take towards the increasing costs,” Ivana Strelcová, spokeswoman of SAD Žilina, told The Slovak Spectator.

According to Strelcová, they have several options: “They will either reach deeper into their pockets and will pay the increased costs without impacting the passengers, or cut the number of lines or eventually transfer the burden of the toll by increasing the fare.”

As to whether SAD Žilina plans to increase fares, Strelcová said that the company would re-evaluate fares after receiving the first invoices.

“In fact, there is a [price] hike of 5 to 20 percent on particular lines,” Strelcová said. “We are also seriously considering the complete cancellation of long-distance lines.”

Eurobus, another local bus operator, estimates that it will incur considerable extra expenses because of the toll system. Ľubomír Gerši, Director General of Eurobus, told The Slovak Spectator that his company’s additional annual costs from the electronic toll are expected to be €185,659 for local transportation and €166,946 for long-distance and international routes, including the purchase and installation of onboard units.

Eurobus fares on local lines remain unchanged, while prices for long-distance tickets have gone up by about 7 to 10 percent based on the type of route and the tolled sections used, Gerši said.