WITH 2010 having now arrived on the calendar, time is passing quickly and reminding opposition leaders that they might not have too many opportunities left to change their standings before the June parliamentary elections. Many of the opposition parties are trying to catch up on what they have neglected or postponed in the past three and a half years and now at least the theoretical possibilities for pre-election cooperation are taking more concrete shape. 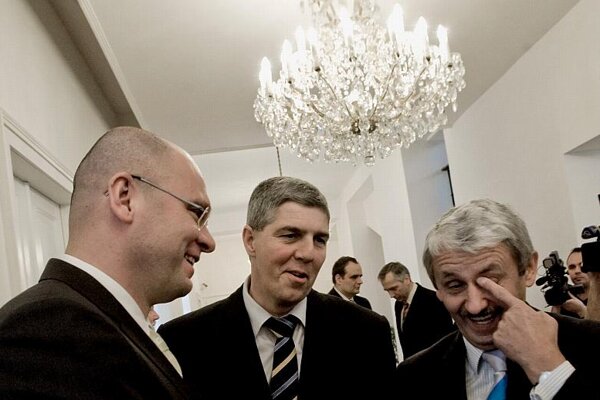 WITH 2010 having now arrived on the calendar, time is passing quickly and reminding opposition leaders that they might not have too many opportunities left to change their standings before the June parliamentary elections. Many of the opposition parties are trying to catch up on what they have neglected or postponed in the past three and a half years and now at least the theoretical possibilities for pre-election cooperation are taking more concrete shape.

The biggest opposition party, the Slovak Democratic and Christian Union (SDKÚ), initiated a meeting of centre-right parties in mid-December that proved less than fruitful. Subsequently, the SDKÚ apparently decided to pick one of those parties and make it a partnership offer for the 2010 parliamentary elections. The relatively new and still rather small party Freedom and Solidarity (SaS), founded by economist Richard Sulík, was chosen as a potential partner.

“I believe it was a rather generous offer from SDKÚ, since it’s a bigger party with solid support and certain political and expert capital,” political analyst and director of the non-governmental Institute for Public Affairs Grigorij Mesežnikov told The Slovak Spectator. He said that the SDKÚ probably realised that a considerable portion of SaS voters are former or potential SDKÚ voters and that any differences in values between the two parties are not very large. As a result, SDKÚ hoped that voters would accept such cooperation.

However generous the offer might have been, the SaS Republican Council stated on January 5 that they would agree to such cooperation only if the coalition were led by someone other than SDKÚ leader Mikuláš Dzurinda, whom they labelled unacceptable to SaS voters.

“Dzurinda as a leader doesn’t come into consideration for those of our voters who vote for us in protest against him,” Sulík explained on his blog. “The result would be that a coalition of the SDKÚ and SaS with Dzurinda as the leader would get about the same number of votes as the SDKÚ alone if SaS did not exist.”

The SDKÚ, in turn, called that condition unacceptable and labelled the SaS response as being not serious.

“We gave a serious offer to SaS, but we don’t consider their answer to be a serious one,” SDKÚ deputy chairman Ivan Mikloš said, as quoted by the SITA newswire.

“Calling our answer not serious is a sign of desperation and I have to say I expected more from experienced politicians,” Sulík wrote in reaction. He also commented that there are several people within the SDKÚ he could imagine as a leader of the potential coalition, specifically naming former opposition presidential candidate Iveta Radičová.

Radičová said she cannot imagine herself as the leader of such a coalition. The TA3 private TV news channel reported that she is even considering withdrawing from political life, depending on how her party accepts the election programme she is currently preparing in the social area.

“The reaction of SaS shows that the party is programme-wise relatively close to SDKÚ, but
politically not very experienced,” Mesežnikov said. “Even if the reservations about the leader of another party are legitimate and are understandable, solving them in public was not very good tactics on the part of SaS if they were serious about cooperation with SDKÚ.”

Mesežnikov admits, however, that it might not have been any lack of political experience on the part of SaS but rather a political gambit with the aim of winning over some SDKÚ voters.

Within a few days of the end of discussions between SaS and the SDKÚ, SaS approached another newcomer on the Slovak political scene, the Most-Híd party founded by Bela Bugár, who left the Hungarian Coalition Party (SMK) last year. Bugár announced on January 11 that his party will hold talks with SaS about three possible forms of pre-election cooperation, including the creation of an election coalition. Most-Híd has appointed a negotiating team for this purpose, the TASR newswire reported.

Mesežnikov believes that cooperation between SaS and Most-Híd might be successful for the parliamentary elections, characterising both parties as in the same “weight category” in regard to voters’ support and noting that they are both relatively new on the political scene.

“I believe voters would accept this union, but still, the voter base of the two parties is rather different and the differences on issues are bigger than those between, for instance, SDKÚ and SaS,” Mesežnikov said. He added that the two parties – which surveys show each have about 5-percent voter support – might be able to surpass the 7-percent threshold required for an formal election coalition to get seats in parliament.

“And that would be an acceptable result overall, because if neither party made it to the parliament it would be a loss [for the centre-right of the political spectrum],” Mesežnikov said.