From garage to global success

DURING the communist regime Slovakia’s economy was under central command, with large-scale producers manufacturing to satisfy not only local demand but also the needs of other countries within the so-called Soviet bloc. The fall of the Iron Curtain and the subsequent revolution of free-market economics meant the end for many such giants, but also provided new opportunities for Slovaks courageous enough to start their own businesses. Some of them managed to make it – literally from their garage to the world market – and their products are now sold around the globe. 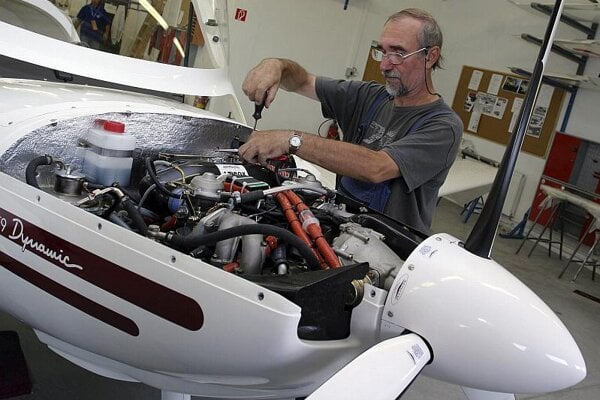 DURING the communist regime Slovakia’s economy was under central command, with large-scale producers manufacturing to satisfy not only local demand but also the needs of other countries within the so-called Soviet bloc. The fall of the Iron Curtain and the subsequent revolution of free-market economics meant the end for many such giants, but also provided new opportunities for Slovaks courageous enough to start their own businesses. Some of them managed to make it – literally from their garage to the world market – and their products are now sold around the globe.

Millions of computers are protected against viruses by a program developed by Eset. People follow iPhone navigational instructions designed by Sygic or cruise the skies in ultralight Dynamic aeroplanes. Lighting produced by OMS illuminates the grounds of Tottenham Hotspur Football Club in Great Britain. And wine lovers can look forward to savouring wine matured in Boswell-Polonyi barrels made from Slovak oak.

Eset is the most well-known example of a Slovak company that started as a small new firm and, over the years, has developed into a prominent company with a global reach. Marian Timoracký, a marketing expert and managing partner of United Consultants, sees Eset as unquestionably the most successful Slovak trademark of all.

“In Slovakia almost everybody knows their legendary NOD32 antivirus software, but only a few people know that half a billion people around the globe know their trademark and that more than 100 million clients use their products,” Timoracký told The Slovak Spectator.

The development of a universal program for the identification and treatment of computer threats, which started in 1987, when its first version was created, and then underwent significant changes and improvements in the first half of 1990s, was the cornerstone of the company’s future success. A favourable review in the British magazine Virus Bulletin in 1998 put the program into the spotlight for the world’s experts.

The creation of effective anti-virus software while focusing on key characteristics – proactive detection of threats, low system requirements and simple control – helped Eset establish itself on the market, according to Martin Baranovič, public relations manager for EMEA at Eset.

“Eset distinguishes itself from the competition in particular by its long-term high quality level and by the stability of its system,” Baranovič told The Slovak Spectator. “Clients know that Eset traditionally provides a high level of protection against computer threats and does not burden its product with useless and needless features. It does not have periods when it is excellent and then periods when it is weak.”

Eset was the 11th fastest-growing technology company in the central European region, which covers 10 countries, including fast-developing ones in the Balkan region, according to the Deloitte Technology Fast 50 Central Europe ranking for 2009. Eset has recorded 951-percent growth in the past five years and is the fastest growing technology firm in Slovakia, the company wrote in a press release.

Eset was not the only Slovak company in the Deloitte ranking. In another category, ‘Rising Stars’, in which young companies with great potential were nominated, Sygic was ranked in sixth place. The company, which produces a unique multi-platform navigation engine, was the sole Slovak representative in that category.

The Sygic story commenced in 2002, when its current CEO began to focus on GSM, GPRS and GPS software development toolkits for industrial mobile devices utilised in the logistics market. The company was founded in 2004, while its focus narrowed on navigation software. The crucial decision in Sygic's development was to abandon the design of product- and version-specific navigation applications and instead to design a multi-platform navigation engine. The multi-platform approach makes it easy to adapt the navigation program to virtually any mobile device or in-dash solution, regardless of the operating platform, screen size or type of operation, whether key-input or touch-screen.

“Creation of this unique multi-platform navigation engine gave the company a competitive edge over established brands when it entered the mobile phone GPS mass market in 2006," Anna Hurbanič, a spokesperson for Sygic, told The Slovak Spectator, adding that this advantage allows the company to get to market ahead of the competition with any new operating system that has appeared since or which will appear in the future. “Sygic’s greatest success is definitely the fact that it has become a globally acknowledged brand and one of the leading providers of turn-by-turn voice-guided GPS navigation for mobile devices in just a very short time on the market. Another great success is being the very first supplier of turn-by-turn navigation for the iPhone, as well as one of the very few available for the popular Google Android OS devices, and in a few days our product will be the first turn-by-turn navigation launched for Nokia Maemo phones.”

According to Hurbanič, along with a quality product Sygic’s strength lies in its customer support and bi-directional communication with users, enabling the constant improvement of its product. She said Sygic is not resting on its laurels, but is continuing to bring innovations and new products to its customers.

“The Sygic development team is also working on a wholly new product that we believe will change the history of mobile navigation, but we cannot reveal more at this moment,” Hurbanič added.

Lighting producer OMS has taken a less traditional approach to its development. As company director general Vladimír Levársky told the Hospodárske Noviny daily, OMS was silent for a very long time. It worked on development and grew into a strong company out of the sight of competitors.

“We consider the fact that we have managed to build up a company on a green field, without any privatisation, subsidies or contacts to be our biggest success,” Levársky told The Slovak Spectator. “Over 15 years OMS managed to establish itself within the demanding competitive environment of traditional producers of lighting fixtures to become one of the top European producers.“

From the very beginning OMS tried to do things in a different way to its competitors. It was aggressive, but in a healthy way, and offered high quality products for reasonable prices.


“We managed to be flexible towards the needs of customers,” said Levársky. “We met their requirements quickly and reliably. Thanks to this we managed to establish ourselves amongst European rivals who had decades-long tradition [in the business].”

Over the years, OMS has moved from production to the development and design of lighting.


“Nowadays we have our own research and development team and designers, and we are able to bring in our own solutions,” said Levársky, adding that now the company is endeavouring to become one of the top ten lighting companies in Europe.

This year OMS plans to invest a total of €7 million, of which one half will go into its R&D centre. Almost 40 specialists in the centre develop new products for OMS, focusing on energy efficiency and usage of LED technologies.

The path to success taken by the Iron Art company of Július Polonyi was different: his meeting with Brad Boswell from T.W. Boswell, a company which produces over 51 percent of the world’s barrique wine barrels, gave it a new twist. The companies created a joint trademark, Boswell-Polonyi. Iron Art supplies shooks – the wooden sections from which barrels are made – out of Slovak oak and Boswell uses them to produce barrels in France’s Bordeaux region.

“In January 2009, our joint trademark was officially introduced at the world exhibition in Sacramento in California, where it harvested great success,” Polonyi told The Slovak Spectator. “Boswell offers barrels produced from Slovak oak and designed to mature wines of the highest quality via its trade networks in 20 countries around the world.”

The above are just a few examples of Slovak companies succeeding. The path that each of them took to build a thriving business was different, but each of their owners worked hard to realise their dream of a successful company. There is no single formula for achieving success. Sometimes the best way is to find an unoccupied niche in the market, while in others the zest to do things differently from the competition and listen to customers can create a miracle. None of them are resting on their laurels, but are continuing to bring innovations and new products to their customers.