SLOVAKIA’s State Language Act, which has been a factor in the deterioriation of Slovak-Hungarian relations, will be examined by yet another international authority. After the High Commissioner for Minorities of the Organisation for Security and Co-operation in Europe (OSCE) participated in drafting the implementation guidelines for the controversial law and promised to keep an eye on its future application, now experts from the Council of Europe are also expected to give their opinions. 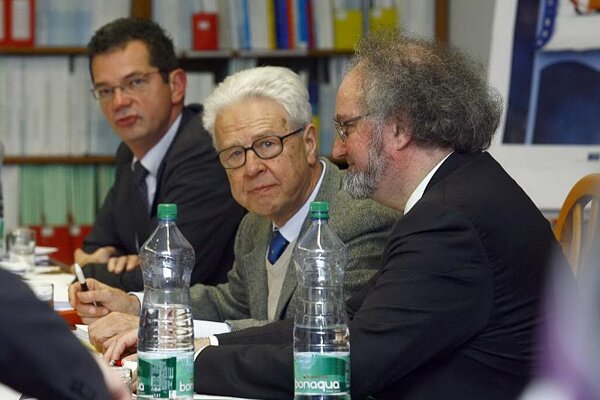 SLOVAKIA’s State Language Act, which has been a factor in the deterioriation of Slovak-Hungarian relations, will be examined by yet another international authority. After the High Commissioner for Minorities of the Organisation for Security and Co-operation in Europe (OSCE) participated in drafting the implementation guidelines for the controversial law and promised to keep an eye on its future application, now experts from the Council of Europe are also expected to give their opinions.

A four-member delegation from the European Commission for Democracy through Law, also known as the Venice Commission, which serves as an advisory body to the Council of Europe on constitutional matters, visited Slovakia on January 18 and 19 at the request of the Slovak government to gather information to prepare a statement on the State Language Act.

The delegation met officials from the Foreign Affairs and Culture Ministries, representatives of minorities living in Slovakia, and political parties representing ethnic Hungarian citizens. The latter have been among the main critics of the law. The delegation also made a field trip to Dunajská Streda in south-western Slovakia where a large number of citizens are ethnic Hungarians.

Slovakia asked the Venice Commission to evaluate the compliance of the State Language Act with international norms and the obligations of the country towards the international community, the Foreign Affairs Ministry stated before the visit began.

The law, passed in June 2009, became effective in September 2009 and has encountered heavy criticism, mainly from representatives of the ethnic Hungarian minority living in Slovakia as well from government representatives and politicians in Hungary who have complained that the law harms the position of minorities living in Slovakia and hinders their basic right to use their mother tongue.

Representatives of SMK and Most-Híd, two political parties which represent primarily ethnic Hungarians living in Slovakia, met the Venice Commission’s delegation to express their opinions on the amended language law. SMK MPs told the delegation that they found the law to be restrictive: instead of helping minorities it does exactly the opposite, said the party’s deputy chairman, József Berényi, as reported by the TASR newswire.

The chairman of Most-Híd, Béla Bugár, said the members of the delegation were mainly interested in the perception of the law by minorities themselves and they asked whether the amended law had made any changes to past legislation on the use of minority languages.

The Slovak government has defended the law since its passage, as did Knut Vollebaek, the OSCE High Commissioner for Minorities who – despite some reservations – stated that it is in accordance with international legislation. However, the centre-right opposition parties and some observers have opined that amending the law on the state language was unnecessary.

Sergio Bartole, a member of the Venice Commission’s delegation, said that he had not seen the OSCE commissioner’s opinion on the law.

“There are a lot of people talking around,” he told journalists at the end of the commission’s visit to Slovakia. “We have one responsibility: to give an opinion which is based on our own thinking. So we can read a lot of opinions, but we have the duty to be impartial, neutral on this topic, taking into account essentially the results of our own thinking.”

Bertole said that they had many contacts with Slovak authorities, political parties and representatives of national minorities.

“We got a lot of information and we are organising our work in such a way of having an exchange of opinions, perhaps in March inside the plenary meeting of the Venice Commission,” Bartole said. “But I am definitely sure that we won’t be able to conclude anything in March.”

In order to be able to present a statement, according to Bartole, the Venice Commission needs more detailed information concerning the legislation in force in Slovakia and the position of minorities in many areas that are covered by the State Language Act, since the provisions of the law are difficult to understand without taking into account the specific rules applied sector by sector.