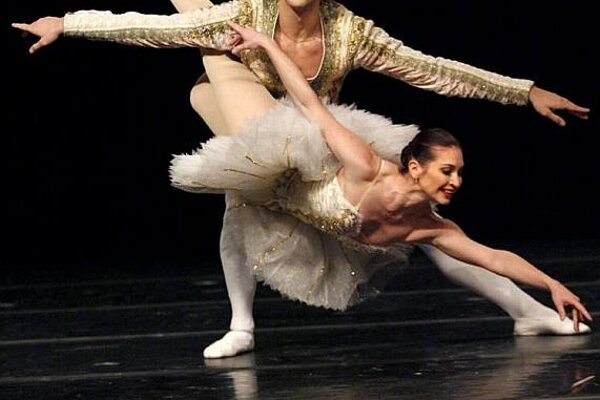 THE SLOVAK National Theatre (SND) premiered the ballet Sleeping Beauty by P. I. Tchaikovsky and French choreographer Marius Petipa on January 15 in Bratislava. The soloist of the Swedish Royal Ballet Andery Leonovitch and the SND’s soloist Nikoleta Stehlíková have the lead roles. The story of the princess, fallen deeply asleep, who can be woken only by the kiss of a handsome prince, has been among the pillars of classical ballet for over 50 years. Additional performances are scheduled on January 22 and 26 at 19:00 in the Hall of Opera and Ballet of the New SND Building, Pribinova 17. Tel: 02/2047-2111, 02/2049-4290. More info: www.snd.sk.

Amatista – We Will Dress You into Your Fantasy (Oblečieme vás do vašich predstáv). The gallery is introducing one young designer every month and now shows works by Michala Doubeková.

House of Traditional Dances – The series Tanečný dom brings Slovak folk dances closer to all and teaches participants to dance. This performance focuses on the dances from Čierny Balog to the music of Roma folk band Bartošovci. Everyone can try their newly acquired skills at the end of the folk dance carnival.

Planets – An exhibition at the Shopping Palace Zlaté Piesky called Planets of the Solar System offers visitors a chance to participate in a competition. On January 28, visitors can observe the evening sky with telescopes between 15:30 and 20:30 and a lecture by Zdeněk Urban begins at 17:30.

Večer moderného tanca – The dance theatre Bralen with its rich traditions and numerous fans in Slovakia celebrates its 35th birthday with an evening of modern dance.

Ilona Németh and Martin Piaček – The Németh-Piaček duo, along with guest János Sugár, present their views on relationships, conflicts, and tolerance in a region known for its multiculturalism.

Carmen – The movie by Carlos Saura from 1983, featuring Antonio Gades with music by Paco de Lucia and George Bizet, has become a legend. Saura chose the Spanish phenomenon of flamenco to show passion and fatal infatuation.

Monopolis – This exhibition by Michal Černák is available at Zvolen Castle. The young artist’s works show his scepticism towards manipulation and power games.


Poprad
EXHIBITION: Two exhibitions are running simultaneously in the Tatranská Galéria in Poprad: photos by Poprad native Lukáš Roganský entitled “Afghanistan”; and the first cycle of a series dedicated to the 50-year history of the gallery called “Naive, but Ours” or the “Insita”, presenting the naive stream of art from the gallery’s collections. Both exhibits opened on January 22 . Visitors can view them Tue-Sat 10:00-17:00 or Sun 12:00-17:00 in Elektráreň TG, Hviezdoslavova 12, in Poprad. Admission is €1.50 or €1. Tel: 052/7721-968, www.tatragaleria.sk.

Orchids – The Botanical Garden of the Pavol Jozef Šafárik University in Košice presents a special exhibition of 200 orchids and their hybrids, including rare species. It is also possible to buy some of the exotic plants and grow them at home.

Folk Architecture in the Photography of Ján Lazorík – This ethnographer has collected an arresting exhibition of pictures of folk constructions in eastern Slovakia.