THE EARLY Romanesque churches and rotundas on Slovak territory are among the oldest religious buildings in the whole region. Some of them date back to as early as the 9th and 10th centuries, soon after Christianity was brought here, and although they have been rebuilt and restored many times they still require maintenance and reconstruction. 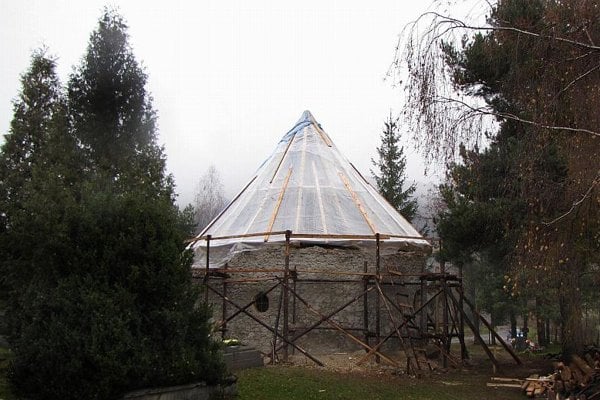 THE EARLY Romanesque churches and rotundas on Slovak territory are among the oldest religious buildings in the whole region. Some of them date back to as early as the 9th and 10th centuries, soon after Christianity was brought here, and although they have been rebuilt and restored many times they still require maintenance and reconstruction.

The renewal of Slovakia’s Romanesque rotundas was one of the main goals of a 2009 programme of grants from the Culture Ministry entitled ‘Let Us Renew Our House’. Six Romanesque rotundas that are among the oldest surviving religious structures in the country were originally identified as priorities: the Chapel of St Anna in Prihradzany and the Church of St Margita in Šivetice (both in Revúca district), the rotundas in Bíňa (Nové Zámky district) and in Nitrianska Blatnica (Topoľčany district) as well as the Rotunda of St George in Skalica (Skalica district) and the Rotunda of the Exaltation of the Holy Cross in Križovany nad Dudváhom (Trnava district). The Chapel of St Anna and the Church of St Margita in Šivetice were in the worst shape, and thus their owners received the biggest contributions towards their repair.

The subsidies, the SITA newswire was told by the Culture Ministry, were mostly allocated to document each structure’s design, to secure static supporting structures, to repair roof frames and roofing, as well as to rent scaffolding and repair façades. In several cases, the grant was also used to finance archaeological and historical-artistic research, and plan the restoration. The ministry did not approve resources for the Rotunda in Križovany nad Dudváhom as its application arrived after resources within the grant programme had already been exhausted. The owners of St George’s Rotunda in Skalica did not ask for a subsidy. Restoration work on the other four churches is due to be completed this month and the appropriate regional conservation authorities must then inspect the results.

Apart from this initiative, another has highlighted the importance of Slovak Romanesque churches: a book, Romanesque Churches, by Štefan Podolinský, which was published at the end of 2009. It focuses on 41 structures, and also includes a representative selection of many more. Some of the most memorable ones are the solitary church in Kopčany in western Slovakia that dates from the end of the 9th century and which, since 2009, has been recorded in the list of European Cultural Heritage. Also from the second half of the 9th century are the foundations of the church at Devín, of the basilica at Bratislava Castle, and of the rotunda in Kostolec. These all come from the period of the Great Moravian Empire, as does the church in Kostoľany pod Tríbečom, with its precious thousand-year-old frescoes. The round Church of St Margita of Antioch in Šivetice was built in the 13th century and is probably the biggest rotunda in the whole of central Europe. The book also includes the main church in Spišská Kapitula, St Martin’s Cathedral.