THE FIRST survey of the New Year, as the June national elections approach, to ask about the popularity of Slovakia’s political parties produced a surprise when its results showed a relatively small newcomer in the political arena, the Freedom and Solidarity party (SaS), ranking third. At the same time, the poll confirmed that the dominant party in the ruling coalition, Smer, enjoys widespread public support, with over 40 percent of those polled saying they would support it. But poll results released a few days later by another survey agency suggest that SaS should not become too euphoric. 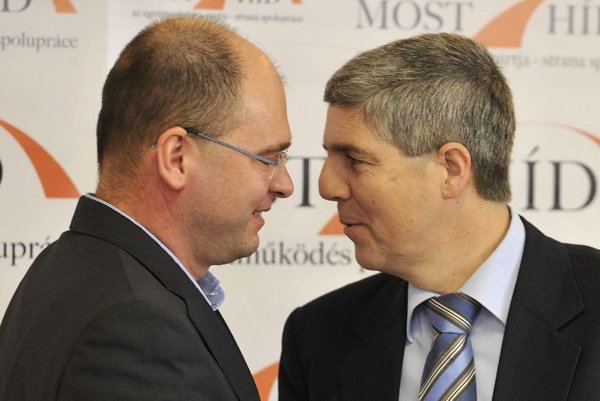 Richard Sulík and Béla Bugár's will not go into the national elections as allies. (Source: TASR)
Font size:A-|A+0

THE FIRST survey of the New Year, as the June national elections approach, to ask about the popularity of Slovakia’s political parties produced a surprise when its results showed a relatively small newcomer in the political arena, the Freedom and Solidarity party (SaS), ranking third. At the same time, the poll confirmed that the dominant party in the ruling coalition, Smer, enjoys widespread public support, with over 40 percent of those polled saying they would support it. But poll results released a few days later by another survey agency suggest that SaS should not become too euphoric.

The MVK polling agency released the results of its poll on January 25, showing that Smer would have been preferred by 42 percent of those polled if the elections had been held in January. The Slovak Democratic and Christian Union (SDKÚ) came in second with 9.4 percent support and SaS, which had previously polled around 5 percent support, climbed up to 9.2 percent and came out as the third strongest party according to MVK’s survey.

Junior members of the governing coalition, the Movement for a Democratic Slovakia (HZDS) and the Slovak National Party (SNS), would also capture seats in the new parliament, polling results of 5.4 and 6 percent, respectively.

The director of the MVK agency, Pavel Haulík, said no firm conclusions can be drawn from this single poll and there is a need for further polls to either confirm or refute the trends recorded in January. Political analyst Grigorij Mesežnikov agreed with Haulík, saying that a single poll can sometimes record a deviation and that a series of polls is needed to discern real trends.

Indeed, according to the results of a telephone survey conducted by the Polis agency released a few days later, SaS had the support of only 5.5 percent of those polled, while SDKÚ polled much closer to its recent level of preferences, at over 15 percent, the Sme daily reported.

Nevertheless, there are rational explanations for increasing voter support for SaS: the party’s intensive communication via all forms of media, but especially through electronic media and blogs; a series of publications released by the leader of SaS; the attention the party is receiving with its petition for a national referendum on six issues; and its recent rejection of pre-election cooperation with the SDKÚ which brought it into the headlines.

“All this could contribute to improving the position of the party, but I have a feeling that the situation can be adequately evaluated only after a certain time, when the results of other polls by other agencies are known,” Mesežnikov told The Slovak Spectator.

The Focus agency poll published on January 28, similarly to the MVK poll, reported Smer as the clear leader among parties with over 41 percent support of those polled. The SDKÚ finished second, but with a considerably higher level of support than in the MVK poll, at just over 15 percent, followed by the KDH with 9 percent. SaS would reach parliament according to the Focus poll, but with only slightly over 5 percent support, about the same as Most-Híd. Other parties that would meet the threshold to get parliamentary seats were the HZDS on 6.5 percent, the SNS on 6.2 percent and the SMK on 5.6 percent.

Several sceptical voices were raised after MVK published its poll results, with some questioning whether the poll had been manipulated in favour of SaS, since better polling results tend to encourage undecided voters to vote for the stronger parties. Haulík rejected such accusations as did the leader of SaS, Richard Sulík.

The Sme daily reported that two-thirds of the questions in the MVK poll were marketing questions – questions asked on behalf of clients who pay about €1,200 per question. SaS purchased one question in the poll, asking whether voters would approve of the party’s currently-discussed possibility of a pre-election coalition with Most-Híd. The poll indicated that 30 percent of SaS supporters would not be supportive of such cooperation. SaS apparently based its decision not to cooperate with Most-Híd on the results of that poll.

“Our voters want us to work on our own,” Sulík said, as quoted by the SITA newswire.

Mesežnikov said SaS’s decision was rather risky because it might have created the impression among the public that SaS decides only on the basis of polls, or in this case of only one poll which may or may not be accurate.

“They simply evaluated the situation on the basis of their feelings, intuition, knowledge about the development of their electoral support and the last poll and decided not to enter [the cooperation], and the leaders of both these parties will bear the consequences of this, either positive or negative,” Mesežnikov said.