THE NEARING elections and the accumulating scandals of the ruling government coalition caused at least a little bit of noise in Bratislava on the afternoon of Saturday, January 23. A protest demonstration with the theme “We like this country but we don’t like this government” reportedly attracted between 500 and 1,000 people to Bratislava’s central SNP Square. The crowd was made up of citizen activists aided by the centre-right opposition parties. 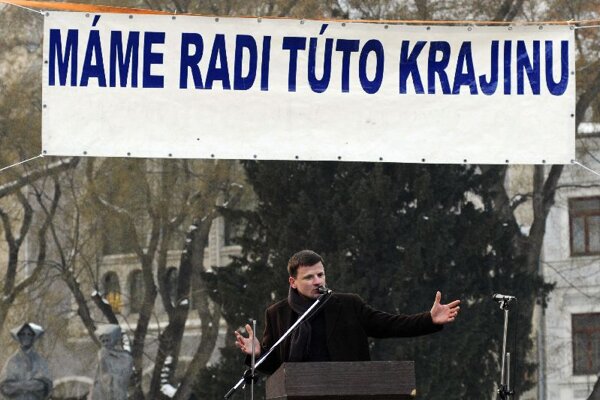 THE NEARING elections and the accumulating scandals of the ruling government coalition caused at least a little bit of noise in Bratislava on the afternoon of Saturday, January 23. A protest demonstration with the theme “We like this country but we don’t like this government” reportedly attracted between 500 and 1,000 people to Bratislava’s central SNP Square. The crowd was made up of citizen activists aided by the centre-right opposition parties.

The organisers of the demonstration were two rather well-known Slovak activists, Ondrej Dostál, the director of the Conservative Institute of Milan Rastislav Štefánik and a vice-chairman of the Civic Conservative Party (OKS), and Alojz Hlina, who has recently become well known as an outspoken critic of Ján Slota, the head of the Slovak National Party (SNS). They were backed by the Civic Democratic Youth movement.

Hlina said the protest pulled together people who like Slovakia, their country, but are worried about the direction it has taken. Hlina added that he thinks Slovakia is headed towards big problems. He again sharply criticised Slota, who the day before the protest had been videotaped in an apparently intoxicated state in the parliament building by reporters from the Plus Jeden Deň daily.

“Fico is taking our money from us, too much of our money, and gives it away to his friends,” Dostál said. “We are here today because we don’t like that and we want to change it.”

The protest, originally organised by activists, was later presented as a protest by the opposition political parties because the leaders of all the centre-right parties met on the stage, an unusual event for the Slovak opposition in recent years.

“I think it was a kind of success to get all those leaders there on one stage together,” political analyst Grigorij Mesežnikov told The Slovak Spectator. “Because in that way they are showing that they are close to each other – their programmes and their values – and that if they were to get the chance of coalition cooperation, they would take it.”

The opposition leaders dished out some harsh criticism of the ruling coalition.

Ján Figeľ, head of the Christian Democratic Movement (KDH), said he likes Slovakia and he wants it to serve its citizens through its institutions and not misuse the state’s power against them.

Political rivals Pál Csáky, the leader of the Hungarian Coalition Party (SMK) and Béla Bugár, the chairman of Most-Híd, a party founded in spring 2009 by breakaway SMK renegades, stood on the stage together.

“I think this is a clear signal that Slovakia wants a change,” said Csáky as he addressed the crowd.

“It’s time to say that the emperor is naked, that the people have been deceived,” Bugár said.

The leader of the Freedom and Solidarity (SaS) party, Richard Sulík, said his party joined the protest against the present government also with its petition calling for a referendum on multiple issues, one of which is the cancellation of mandatory fees for Slovakia’s public-service radio and TV.

The leader of the OKS, Peter Zajac, said that Slovakia needs educated people, because with more educated people active in public life, the less chance there will be of getting “scoundrels such as those who rule us today”.

Mesežnikov said that the strong criticism and rejection of the current government represented a significant message flowing from the protest.

“I perceive it as them drawing a clear distinction [between themselves] and the government of the ruling coalition,” Mesežnikov said in his analysis of the protest. “They are competing among themselves for similar groups of voters, that’s true, but [through the protest] they are showing that they are ready to cooperate and they see the government as their main enemy.”