FOR A MOMENT it seemed like some real, breathing people were emerging from the fog surrounding the US-based garage firm Interblue Group – the company which bought Slovakia’s excess emission quotas for an amount well below the price received by neighbouring countries for their quotas in a deal that has been heavily criticised for more than a year and has cost two environment ministers their jobs. 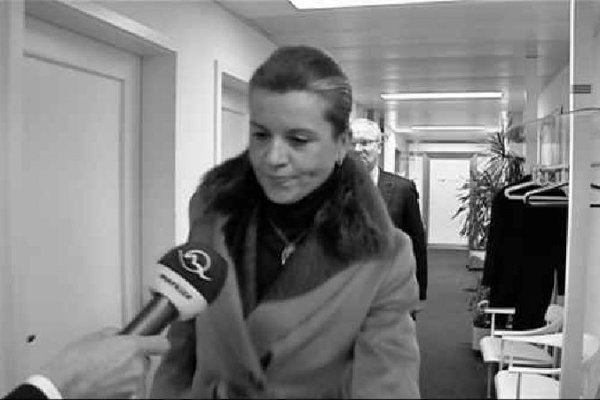 FOR A MOMENT it seemed like some real, breathing people were emerging from the fog surrounding the US-based garage firm Interblue Group – the company which bought Slovakia’s excess emission quotas for an amount well below the price received by neighbouring countries for their quotas in a deal that has been heavily criticised for more than a year and has cost two environment ministers their jobs.

However, the January 20 meeting between representatives of the Slovak Environment Ministry and Interblue Group (Europe), a new Swiss company that had apparently morphed from the obscure US-based firm, produced little in the way of concrete results other than the resignation of the only publicly-seen representative of Interblue. That representative, Jana Lütken, said she did not resign because of the deal itself, but because of what she called a serious injury caused to her by a Slovak television crew. A political ethics watchdog group said that Lutken and Interblue are merely doing everything possible to delay resolution of the issues surrounding the contract.

Slovakia has been attempting to secure a €15 million bonus payment from Interblue Group for having spent the original proceeds from the contract on so-called green projects. The contract with Interblue included a clause that if Slovakia spent the funds from the sale of its emissions quotas within the ‘Green Investment Scheme’ (GIS), the country would be eligible for a bonus payment of €1 per tonne, or €15 million in total.

The Slovak government has said that its nationwide thermal insulation programme, funded with proceeds from the contract, falls under the GIS scheme.

The US-based Interblue Group ceased to exist on December 29, 2009 and the rights and obligations of the firm were apparently transferred to Interblue Group (Europe), based in Switzerland. When The Slovak Spectator went to print on January 28 the ministry had not released any relevant documentation showing the legal successor to Interblue Group LLC, which had been registered in Washington State in the USA. According to Jana Kaplanová, director of the Environment Ministry’s communications department, the parties agreed on January 20 that this documentation would be provided by January 31.

The Environment Ministry was otherwise rather tight-lipped about the nature of the discussions at the meeting held at Slovakia’s general consulate in Zurich, Switzerland.

“We want to emphasise that fundamental progress has been made in resolving the issue of Slovakia’s emissions quotas,” read an Environment Ministry statement released on January 21.

“In association with the continuation of the cancellation of the legal-trade relationship, the authorised representative of the group said that Interblue Group Europe will continue negotiation only through a legal representative whose name would be announced by the end of January,” the ministry also said in the statement.

Kaplanová also said that regardless of documentation that Interblue Group would provide, the Environment Ministry has prepared steps to effectively protect Slovakia’s interests.

Then in a rather bizarre twist, Jana Lütken announced, in a letter dated January 21 addressed to Environment Minister Jozef Medveď, that she had resigned as a board member of Interblue Group (Europe) due to health reasons.

According to the text of the letter, which was published by the Sme daily on its website, Lütken told Medveď that a camera crew from Slovak broadcaster TV Markíza had “physically hindered” her at the building where the meeting was held.

“When I was re-entering the Slovak consulate these two men followed me and hit my head with the metal door of the consulate entrance,” reads the letter.

Lütken claimed that she had to call for help from her car driver and that several persons had witnessed the whole scene, adding that “such behaviour and physical violence might be normal in Slovakia but is unacceptable in Switzerland”.

Her letter continued that in the evening she had to go to the emergency room of a hospital where she was diagnosed with a “serious brain concussion” and for that reason Lütken said that she is not permitted to work for several weeks and announced that she is resigning her position in Interblue Group (Europe), but perhaps only temporarily.


The editor-in-chief of TV Markíza, Lukáš Diko, denied Lütken’s accusations and told the Sme daily that there was no physical injury to Lütken caused by the station’s crew. He also rejected any attempts to drag the television broadcaster into the dispute between Interblue and the ministry.


“I think that Lütken and Interblue are doing everything possible to procrastinate and delay some concrete steps taken by the Slovak side,” Zuzana Wienk, director of the Fair-Play Alliance, a political watchdog group, told The Slovak Spectator. “It seems absurd to me that our ministry has accepted such tactics. Ms Lütken is not significant at all and there are enough legal steps that Slovakia could take regardless whether Lütken wants to discuss matters or not.”

According to Wienk, the state should be capable of determining whether Interblue Group (Europe) is truly the legal successor of Interblue Group LLC which had been registered in Washington State in the US.

“If the Swiss firm is not the legal successor, the contract for the sale of emissions is not valid and Slovakia should be taking steps in Washington to collect the €15 million debt through the courts there and to eventually file a criminal complaint against the representatives of the firm for the crime of damaging the creditor,” Wienk said.

Wienk also said the Environment Ministry should have long ago turned to a committee within the United Nations, which could assess whether Slovakia met the contract’s conditions, to submit a report on the use of funds from the emissions sale.

“If this body confirms that Slovakia met the conditions, it should immediately start collecting the debt through executors and courts from the former Interblue Group,” said Wienk. “Or if it turns out that the Swiss Interblue is the legal successor, then from this firm. The more time that flows by, the feebler are the chances of Slovakia to collect this money.”

Meanwhile, MP Pavol Frešo from the Slovak Democratic and Christian Union (SDKÚ) said he will demand that Medveď provide an explanation in parliament about the last meeting with Lütken.


Slovakia may have lost as much as €66 million on the sales price that was negotiated with Interblue Group, say opposition parties. The sale has played a part in the sacking of two Slovak environment ministers, Viliam Turský and Ján Chrbet, both of whom were nominees of the Slovak National Party.

The Fair-Play Alliance has published several documents on its website such as the initial certificate of formation of Interblue Group and the first annual report filed by the firm with Washington State authorities. The latter listed the nature of the business as an “asset holding company”.

The state licensing renewal dated July 6, 2009, names the governing people as Jana Lütken and Hans Grop, which according to Wienk confirms that they were also the owners of the firm not only its authorised representatives, as reported by the SITA newswire.