ŽILINA Region has successfully recovered from the collapse of its traditional armaments industry and has recently drawn huge investments particularly from the automotive industry. But the region’s strong connection to car production and its related sectors has shown itself to be not entirely favourable during the current economic crisis and has highlighted the need for more economic diversification. 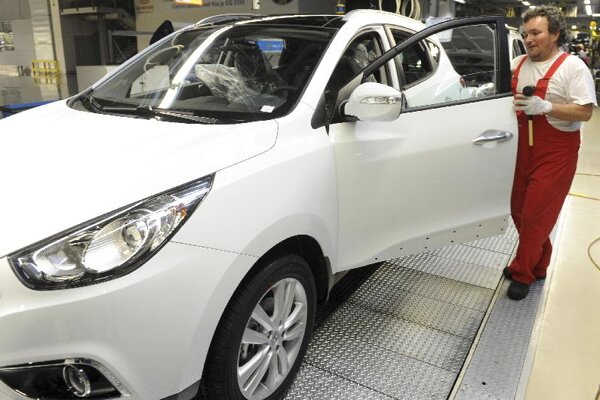 ŽILINA Region has successfully recovered from the collapse of its traditional armaments industry and has recently drawn huge investments particularly from the automotive industry. But the region’s strong connection to car production and its related sectors has shown itself to be not entirely favourable during the current economic crisis and has highlighted the need for more economic diversification.

“The biggest impulse for revitalisation and economic growth in Žilina Region, after the breakdown of the armaments industry in late 1990s, was brought by the swiftly developing engineering, eletro-technical and automotive industries,” Timea Nemešová, the project manager of the direct foreign investments section at the Slovak Investment and Trade Development Agency (SARIO) told The Slovak Spectator. “The investment of Kia Motors from Korea, along with its dense network of subcontractors, has become a propelling engine for growth in the whole region.”

Kia Motors arrived in Slovakia in 2004 and constructed a brand-new plant for assembly of cars and production of engines in Teplička nad Váhom, close to Žilina. It launched serial car production in December 2006.

So far, the company has invested €1 billion in its facilities. It currently assembles three models and employs 2,800 workers. Thousands more employees work for its subcontractors in Slovakia, for example Dong Wong Metal Industry, Mobis, and Hysco.

According to Nemešová, the character of completed investment projects over the 2002-2008 period confirmed a continuing, intensive trend in the expansion of the automotive industry. Of a total of 36 completed investment projects, with planned investments of €1.123 billion and expected creation of 6,883 to 8,145 new jobs, 36 percent were in the automotive industry, including projects by Kyokutoh, Faurecia, Glovis Company and Roadster Automotive.

More than one-fifth of the total investment (22 percent) in the region was directed toward the engineering and metal-processing industry (TFC Cable Assemblies, Gruppo Amaya Telleria) and 17 percent flowed into the electro-technical industry (SPIN-tech, Eltec Energy, and TECO). Firms in the chemical industry accounted for 8 percent of the investments (DKI Plast and Gassman Kunstofftechnik) while the remaining investments were in the construction, wood, and textile industries, according to Nemešová.

Economic crisis bites in the region

Due to the openness of its economy and the fact that car sales and production have been one of the hardest hit economic sectors throughout the world, Žilina Region has felt some deep impacts from the crisis, too. At the end of December 2009, the unemployment rate in the Žilina Region was 10.89 percent, according to the Labour, Social Affairs and Family Office, nearing the level from 2004, at 11.12 at the end of December.

The gross domestic product generated by industry in the region decreased by about 20 to 23 percent in 2009 compared with the previous year while the construction sector registered an annual drop of about 10 percent, according to the Žilina regional chamber of the Slovak Chamber of Commerce and Industry (ŽRK SOPK). Transport-generated GDP fell by over one-quarter in the domestic market and international transport shrank by about 17 percent.

Ján Mišura, the head of the Žilina regional chamber, is disappointed by the lack of a more favourable attitude by banks towards helping regional business entities.

“Comparing figures from 2008 with those from 2009 shows that small and medium-sized companies have had to pay for turbulences in the financial sector,” Mišura told The Slovak Spectator. “Large companies, with their experience, are more capable of adapting to the changed economic situation and finding a way out. It creates a hope that they will be able to revitalise the need for small and medium-sized companies. Unfortunately, the banking sector – in spite of its improved liquidity resulting from the adoption of the euro – has acted neutrally, in the best case. In some cases the sector has even attempted to increase fees for administration of accounts and other services. This is causing problems for local companies in both industry and services to finance their launch of work on new orders for 2010.”

Support for investment and growth

Along with the already established automotive industry, engineering, information-communication technologies, electro-technical, electronics, paper production, wood processing, construction and tourism are seen as good prospects for the further development of the region. This is because of the existing, well-educated labour force and the good level of vocational and higher education in the region.

“With regards to the strong engineering tradition, still relatively high unemployment rate, which was only a bit below 11 percent in December 2009 and the renowned Žilina University, Žilina Region represents a very suitable location for investments, especially into the automotive industry,” said Nemešová. Žilina University has a strong tradition in higher education in the fields of transportation and communications as well as in mechanical, electrical and civil engineering.

“In the future we also expect an inflow of investment into the launch of technical service centres, IT centres, and call centres,” said Nemešová. “Simultaneously, Žilina Region creates a great potential for tourism investments since the region boasts top ski resorts, thermal spas, natural reserves and UNESCO sites.”

To support development of local business Žilina Self-Governing Region has prepared a Catalogue of the Investment Opportunities of Žilina Region which is available in English as well as Slovak. Via its internet version, the catalogue provides comprehensive information about the region, its economy and infrastructure as well as an overview of existing investment opportunities in the region.

When listing the activities that the Žilina regional chamber has organised to support economic development of the region, Mišura mentioned its publication of the "Catalogue of Recommended Companies in the Sub-Regions of Liptov, Orava, Turiec, Považie and Kysuce" for 2009 and 2010. It distributes this catalogue throughout Žilina region, across Slovakia, and internationally as well as at fairs and within the network of chambers of industry and commerce.

The Žilina regional chamber, in cooperation with the Žilina Self-Governing Region, up-dates the database of companies and entrepreneurs available at www.interbiznis.sk and at www.viator.sk, the regional tourism portal. Entrepreneurs can look for detailed information on suppliers and offers at the website of SOPK. The regional chamber also offers advice to business entities and will be providing financial assistance to companies attending engineering, electro-technical, construction and tourism fairs in Poland, Sweden, Serbia, Romania, Belarus, and other countries this year. It has also organised trade missions and exhibitions within Slovakia and abroad, for example in Russia, Austria, Poland and China and the so far not fully-saturated Balkan market.

“Within other activities, we are fundamentally supporting acceleration of construction of the main European E50 and E75 corridors, designed a long time ago, which cross Žilina Region, so that they gain the form of true highways,” said Mišura. He added that the recent problems during the launch of the electronic toll collection system on the main European north-south E75 corridor at Slovakia’s borders with the Czech Republic and Poland have uncovered a weak point for the region and all of Slovakia – the incomplete highway between Svrčinec near Čadca and Zwardoň to Warsaw.
According to Mišura, incomplete highway infrastructure continues to be the main hindrance to further development of the business sphere in the region.

“The biggest hurdle to further development of business in the Žilina region is the construction of the highway tunnel between Martin and Žilina that was halted in 2003,” said Mišura. “Despite promises, this best-prepared construction project on the main European west-east E50 corridor has been moved into only the third package of public-private partnership projects for highway construction,” he said.