ALŽBETA, a Slovak girl in her early twenties, desperately seeks a new life in Dublin where she wants to work as au-pair. Too proud and jealous, she constantly refuses any help from her older sister Tina, who is engaged to a local, Steve. Only after the two sisters decide to discuss a long-buried secret can their relationship finally be restored. 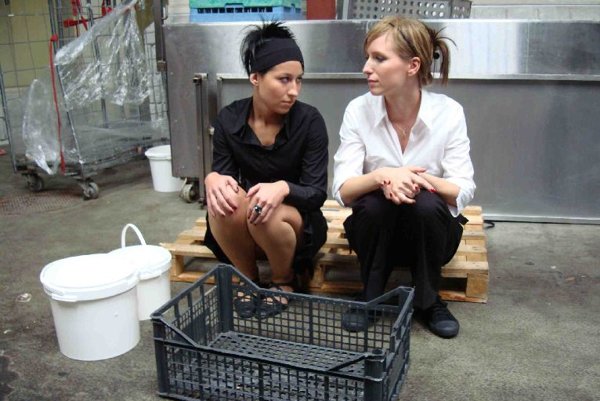 ALŽBETA, a Slovak girl in her early twenties, desperately seeks a new life in Dublin where she wants to work as au-pair. Too proud and jealous, she constantly refuses any help from her older sister Tina, who is engaged to a local, Steve. Only after the two sisters decide to discuss a long-buried secret can their relationship finally be restored.

This is the plotline of Foxes (Líštičky), Slovak director Mira Fornay’s debut feature, now being screened in domestic cinemas. The first Slovak movie to have been premiered in Venice for a quarter of a century, this character-driven drama about Slovak immigrants in Ireland has, since its domestic premiere shortly before the end of 2009, attracted several thousand cinemagoers.

And this is only the beginning, its authors say. It is now being presented at the Rotterdam Film Festival, and the film will then head to the Berlinale next week, the Jameson Dublin Film Festival at the end of February, and, very shortly, also to cinema screens around Europe.

The 32-year-old director, who before Foxes had made around a dozen short films, graduated from Prague’s Academy of Performing Arts and London’s National Film and Television School. It was during her studies in the UK that she realised that no one had ever portrayed the intimate stories of Slovak economic migrants.

“The film market is saturated with movies representing immigrants as victims of their host countries who have been abused by the majority society, such as Lilya 4-ever or Import Export,” Fornay told The Slovak Spectator. “What I am interested in is a more realistic and perhaps a more detached view of how this system can equally be exploited and how immigrants can survive this struggle.”

This also explains the title of the film. Dublin is well known for its high population of urban foxes strolling down public roads and Fornay sees a parallel between these half-domesticated animals and people working abroad.

“Urban foxes have an incredible survival instinct,” she said. “Moreover, they survive on leftovers just like immigrants and though they cannot return to the woods anymore, everybody looks at them as if they were aliens, which once again reminds me of immigrants.”

What Fornay herself calls “a seemingly raw, docu-style mise en scene” supported by shoulder-mounted camerawork and a darkish atmosphere is used to explore the protagonists’ minds “without falling into moralistic sermonising”.

This was important for the director as she wanted to take distance of the topic. Though there are no autobiographical episodes in Foxes, Fornay feels personally involved with the characters.


“The movie ripened over a period of more than five years and it shows my subjective perspective of the world I was then living in,” she remarked. “It is not my personal story, but there is a piece of myself in virtually every character of Foxes, since I also look for love, a sense of security and happiness.”

To ensure maximum realism, the film was shot entirely in Ireland, which naturally increased the costs. Though the budget was tight, the producers managed to make ends meet thanks to an international co-production.

“We obtained grants from Irish, Czech as well as Slovak institutions, so we gathered a sum sufficient for a low-cost debut,” said Juraj Buzalka, one of the film’s producers. “Despite the comparatively limited resources and very few shooting days, we are extremely satisfied with the result. I think Mira Fornay offers a very fresh perspective of women in this ‘age of migration’. She really does not spare her protagonists and she wants to provoke discussion. That is, in my opinion, why Foxes goes to so many prestigious festivals.”

Ľubica Orechovská, PR manager of Foxes, also expressed her contentment with the final shape of the film, and especially with its reception.

“During just the first week after its release in Slovakia more than 1,000 people saw the movie and around 4,000 tickets have been sold to this day, which is, I believe, a remarkable figure given the local context,” she said.

According to Aaron Monaghan, the Irish actor who played the role of Tina’s fiancé Steve, the greatest asset of Foxes was a good script.

“Foxes was such a great script, it dealt with such sensitive and topical issues…; the biggest challenge was working to help turn a great script into a great film,” he told The Slovak Spectator.

“Everyone in Ireland has some experience of immigrants in the country and the issue of immigrants is a hot topic of debate here,” he stated. “There are good opportunities and incentives from our government, though there is sometimes some hostility towards [immigrants] from Irish people themselves. There is a diverse range of issues about the immigrant situation in Ireland which I think Foxes captures perfectly.”

In spite of the positive response, Fornay, who currently divides her time between Prague and Berlin, does not plan to continue developing the topic of immigration in her future projects.

One of these is already underway, but the director is keeping the details secret.

“The script has recently received a Tibor Vichta Award, it has also been shortlisted for the 2011 Krzysztof Kieslowski Award in Cannes, and it has been chosen from among 400 projects for a presentation at this year’s co-production market at the Berlinale, but this is all I can tell you for the moment,” Fornay concluded.