DO YOU BELIEVE that visual arts and literature cannot be combined? If so, check out the new exhibition by French artist Armelle Caron that has recently been brought to Košice by the local branch of Alliance Française (AFK). 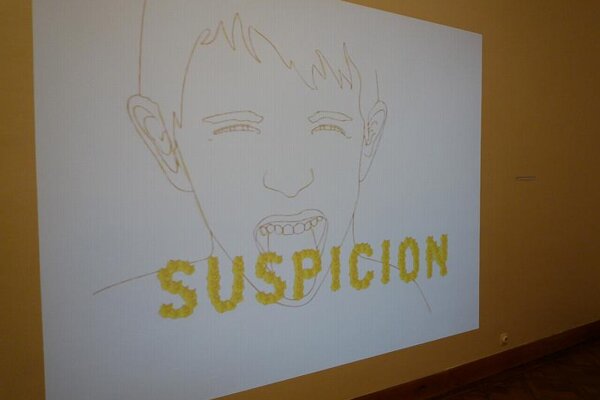 DO YOU BELIEVE that visual arts and literature cannot be combined? If so, check out the new exhibition by French artist Armelle Caron that has recently been brought to Košice by the local branch of Alliance Française (AFK).

Entitled Form of Words, it includes several distinct parts that share a common source of inspiration: the French language. The good news is that the display can be enjoyed even if you do not speak the language, though it is an advantage.

Caron, 31, studied fine arts in France and the UK. When looking for a form of expression that would suit her best, she realised that she did not want to confine herself to a single domain.

“I ended up understanding that image is very limiting, in the sense that it offers only one solution, while words evoke several images, which, moreover, differ depending on [the] particular person,” Caron told The Slovak Spectator.

The word as a subject became central for Caron’s artistic expression. For instance, one of the exhibits she has on display in Košice is a series of videos called “Give or Take a Few”. These portray bunches of scattered words projected onto a wall that gradually morph into other words by only adding, removing or altering one letter, creating pairs such as sexist and exist, or sinister and minister.

Another animated film bearing the title “Words Bloom in Children’s Mouths” portrays children pronouncing words such as “violence”, “money”, “victim” or “power”, made up of little flowers.

“I spent some time in a little village where many children lived and I had a TV in my room, which is exceptional, as I never watch television,” Caron explained. “I remember I was shocked by the character of the programmes; they were all about violence, money and fame. This was even more disturbing when I looked out of the window and saw those little creatures playing outside. It sort of mixed in my head and this is the result.”

Form of Words also features a series of drawings inspired by French sayings and idioms, which is a part that will probably be appreciated best by French speakers.

However, not all Caron’s work is so tightly bound with language. Sometimes, for example, it touches architecture, although in a somewhat unusual way.

Caron recently came up with an idea to take different city plans and cut them to pieces corresponding to the towns’ buildings. She then rearranged the building cut-outs into lines and columns so that they resemble written text.

“This idea came to my mind when I moved from hot and pleasant Guadeloupe to snowy Berlin, where I did not know anybody at the time,” said Caron. “I said to myself, ‘How about making the unfamiliar labyrinth intelligible? It will tell me what I want to know and everything will be fine.’ I later did the same with Istanbul, New York and other cities and I was surprised by the fact that when shown as normal city plans, they can be immediately identified thanks to the history that has shaped them, but when arranged into simple lines, nobody can tell one from another.”

In the end, Caron decided to give the same treatment to Montpellier, her hometown, and made a large wooden puzzle that can be assembled by exhibition visitors. The puzzle is also part of her exhibition in Košice.

“The point is that the city becomes a visual anagram: visitors can use the buildings to build a completely new city, or anything else they wish,” Caron said.

The Košice event is Caron’s seventh individual display. According to Caron, people praise her works mostly “for their simplicity and non-elitism”, which was also the reason why AFK’s management invited her to visit Košice.

“I was immediately seduced by the sobriety of Armelle’s art and by the simplicity of her artistic approach,” said Grégoire Brault, director of AFK and attaché of the French Embassy in Slovakia for linguistic cooperation. “I am confident that the domestic audience will not be insensible to the poetically realistic vision of this young and indisputably talented woman.”

“What would be ideal would be to get two groups of people into the exhibition hall; the first would be laughing at a drawing depicting some French idiom and the second, not seeing the point, would be looking serious and murmuring to themselves ‘why on earth is this so funny?’,” Gajdoš told The Slovak Spectator. “In other words, we want to persuade the public that learning French is useful and important, and that those who master it have an ace in the hole.”

Form of Words is on display at the Eastern Slovak Gallery (Východoslovenská galéria) at Alžbetina 22 daily, except Mondays, from 10:00 to 18:00 until April 7. For more information, visit www.vsg-kosice.sk.