THE BRAINCHILD of the Slovak Democratic and Christian Union (SDKÚ) – a broad coalition to bring together the centre-right parties before the June parliamentary elections – appears to be dead. While some parties toiling in gardens of centre-right voters agreed to join hands for the general elections, the strongest opposition party, SDKÚ, announced it would run alone after being firmly rejected by the political-freshman party, Freedom and Solidarity (SaS). The Most-Híd party, established by Béla Bugár who left the Hungarian Coalition Party (SMK) last year, will band together with the Civic Conservative Party (OKS) while the Christian Democratic Movement (KDH) has not yet clearly rejected post-election cooperation with Slovakia’s most dominant party, Smer. 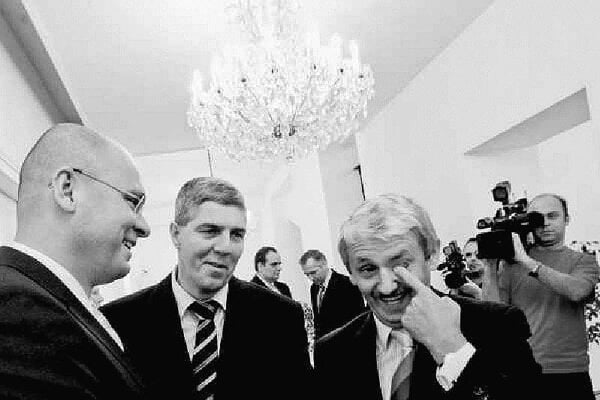 THE BRAINCHILD of the Slovak Democratic and Christian Union (SDKÚ) – a broad coalition to bring together the centre-right parties before the June parliamentary elections – appears to be dead. While some parties toiling in gardens of centre-right voters agreed to join hands for the general elections, the strongest opposition party, SDKÚ, announced it would run alone after being firmly rejected by the political-freshman party, Freedom and Solidarity (SaS). The Most-Híd party, established by Béla Bugár who left the Hungarian Coalition Party (SMK) last year, will band together with the Civic Conservative Party (OKS) while the Christian Democratic Movement (KDH) has not yet clearly rejected post-election cooperation with Slovakia’s most dominant party, Smer.

Political observers say that the parties are quickly running out of time to engage in further combination negotiations since preparing their candidate lists – which are due in just a month – will be a rather tough agenda. Slovakia’s parliamentary election will be held on June 12 and political parties must register their slates of candidates, with up to 150 nominees, by March 14 along with a deposit of €16,596.

The Polis polling agency added yet another impulse beefing up the self-confidence of SaS when its recently released election poll showed that the party founded by Richard Sulík would have captured 8.1 percent of the vote if the parliamentary elections had been held in early February, a significant jump from the 5.5 percent the party polled in January 2010. According to this poll of 917 potential voters released on February 11, Smer had the support of 40.8 percent of the respondents, up about 2 percent up from January; SDKÚ slipped to 14.5 percent support from its previous level of 15.1 percent in January; and KDH scored 10 percent support. Most-Híd had the support of 6 percent of the respondents, the Slovak National Party (SNS) polled at 5.6 percent and SMK garnered 5.1 percent, all three only slightly above the 5 percent threshold required to enter parliament.

And the poll indicated that the Movement for a Democratic Slovakia (HZDS), currently a member of the ruling coalition, would not enter parliament.

Observers and political analysts say there are several parties which at this point do not have a prepaid ticket for the next term of parliament, including two parties of the current ruling coalition, SNS and HZDS, who might find benches only in the park outside parliament after June.

Political scientist Grigorij Mesežnikov told The Slovak Spectator that Most-Híd, SMK and SaS are also in this risk range.

SMK had not been considered as a potential partner in the broad coalition, Mesežnikov said, even though the party has a rather stable voter base, a built-up organisational structure, and a political brand which resonates with conservative voters who would likely continue to vote for the party they supported 10-15 years ago.

Both SDKÚ and KDH are in a more favourable situation because they have traditionally had higher preferences, the political scientist added, though it was before the most recent Polis poll was released.

SDKÚ’s chairman, Mikuláš Dzurinda was guided by an old instinct of opposition parties when he called on centre-right parties to unite in a broad coalition to defeat Robert Fico’s Smer party which has been conquering political popularity charts with untiring zeal over the past four years.

SaS rejected SDKÚ’s offer to form a coalition despite the fact that the party had formally met an earlier condition set by SaS for such a coalition: that Dzurinda would not lead the candidate list for parliamentary elections.

Dzurinda abandoned his position at the top of SDKÚ’s candidate list after Fico reopened an old but agonising issue of unexplained party financing by SDKÚ during the mid 1990s.

Fico claimed that SDKÚ was, and is, financed by shell companies operating in tax havens.

The leaders of SaS made what they called a firm decision on February 9 to run in the parliamentary elections as an individual party and not join in coalition with SDKÚ.

“We do not view Dzurinda’s withdrawal as a fulfilment of our condition but rather as unwillingness and inability to clarify the party’s financing issues,” SaS wrote in a news release, adding that the party considers the explanations provided so far by SDKÚ regarding the questions raised about its financing to be insufficient and unclear.

Sulík stated that his party wants to introduce a new political culture to Slovakia, one which he says has been lacking over the past two decades.

He also said that transparency and the fight against corruption are so important for SaS that the party cannot accept the offer to shape a coalition with SDKÚ.

The SaS leader has said that many financing relationships within SDKÚ are not clear and that its treasurer refuses to answer important questions.

“I think its [SaS] main reason is an effort to make it to parliament independently,” Mesežnikov said. “Obviously, they were very encouraged by the recent MVK poll, which predicted 9 percent for them.”

Mesežnikov added that SaS has been scoring over 5 percent support in a series of polls.

“I think this is the main reason: they have gained more self-confidence and believe they will make it to parliament on their own,” Mesežnikov told The Slovak Spectator.

Mesežnikov also said that it is true to a certain degree that SDKÚ could be a risky partner for SaS.

“Entering a coalition with the party which is a target of attacks by Smer brings an element of uncertainty,” said Mesežnikov, adding, however, that Most-Híd did not consider it to be unacceptable. Based on this, Mesežnikov thinks that the main motivation for SaS was its greater faith in its own strength.

The SDKÚ reacted to the SaS decision by saying it might result in votes from the right side of the political spectrum being wasted and charged that SaS has played into Fico’s hands by refusing to enter a broad coalition.

“SaS has agreed to play Fico’s game which is not aimed at purging the Slovak political system but rather to impair any real alternative to his government,” SDKÚ said, as quoted by the SITA newswire.

SDKÚ also said that the decision made by SaS was even more regrettable because the party made its decision based on what SDKÚ called a “fabricated case from ten years ago” which has become scandalous only due to tendentiously-selected facts presented by Fico.

Through its decision not to join the broad coalition involving SDKÚ, SaS, OKS and Most-Híd, Sulík’s party buried an opportunity to create a viable alternative to the Smer-led government, Bugár from Most-Híd told the TASR newswire.

“We were convinced, me personally as well, that a broad coalition could be an alternative to Smer,” Bugár said. “We saw a chance to attract people who wouldn’t otherwise go out to vote. If anybody thinks that we have a chance to steal away many Smer sympathisers, they are in error. But [as a broad coalition] we would have been able to address those who say it isn’t worthwhile voting. This was our goal.”

Mesežnikov believes that the decisions made by the parties are likely a closed issue at this point.

Mesežnikov says the time parties have to further ponder pre-election coalitions is running short and that such moves will not be possible, even technically, after a certain time.

He added that forming the candidate lists is a demanding process within the parties and that unifying the interests of four parties and defining proportional shares is quite tough to accomplish in the short time before the deadline.

“The time has passed,” Mesežnikov said.