SLOVAKIA seems to have become a frequent travel destination for Knut Vollebaek, the High Commissioner on National Minorities of the Organisation for Security and Cooperation in Europe (OSCE). 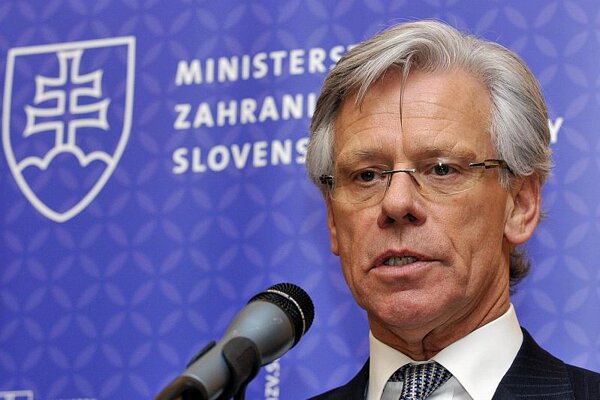 SLOVAKIA seems to have become a frequent travel destination for Knut Vollebaek, the High Commissioner on National Minorities of the Organisation for Security and Cooperation in Europe (OSCE).

During his recent visit to Bratislava on February 8, the purpose of which was to evaluate the impact of Slovakia’s amended State Language Act on the country and particularly its minority communities, he stressed the need to amend other minority-related legislation.

“We discussed and we are also interested in addressing the balance between the State Language Act and the minority language law,” Vollebaek told journalists at a press-conference during his February 8 visit. “We will stay engaged in this process.”

Throughout the day he attended what he called very constructive meetings with the highest representatives of Slovakia, including the president, the prime minister, the foreign affairs minister, the culture minister, respective parliamentary committees and representatives of the Hungarian minority elites. The issue of amending the Law on the Rights and Status of National Minorities (Minority Law) was the main topic throughout.

“The new amendment to the State Language Act has expanded the scope of the Act to natural persons too, and this has consequences for the use of minority language,” Vollebaek said, adding that this is what should be addressed by the amendment to the Minority Law. He also said his office will contribute proposals, suggestions and recommendations on how the law could be amended.

Vollebaek also stressed that he would welcome the running of an information campaign in Slovakia concerning the particulars of the State Language Act, to inform people on how the new legislation affects their daily lives.

Slovak Foreign Affairs Minister Miroslav Lajčák said at the press conference with the High Commissioner that Slovakia is prepared to cooperate with the Hungarian side in the future, but conditioned the willingness on what he called the Hungarian partners’ mature and responsible behaviour.

“That means that disinformation will not be spread about the language law in Slovakia nor will lies be spread about the law outside the country’s boundaries,” said Lajčák, adding that both sides agreed on respecting the statement of the High Commissioner to the State Language Act as far as the Act pursues a legitimate aim and is in line with international rules.

Vollebaek also met with the chairmen of the political parties representing ethnic Hungarians - the Party of Hungarian Coalition (SMK) and Most-Híd. SMK chairman Pál Csáky said he talked to Vollebaek mainly about the amendment to the Minority Law.

“We will submit to him our proposal of the law on using minority languages by the end of March,” Csáky said as quoted by the SITA newswire, adding that all concerned parties should take part in preparing this piece of legislation.

Vollebaek also stressed his opinion that all minority communities living in Slovakia should take part in this process.

The principle of participation was also stressed by the Roundtable of Hungarians in Slovakia, a non-political organisation which gathers minority organisations. It has also prepared its concept of what changes should be made to minority-related legislation, which they call a systemic solution of the rights and status of national minorities in Slovakia.

The Roundtable proposed that an organic, comprehensive minority law as well as a comprehensive law on the use of national minority languages should be elaborated, which should include different types of minorities living in Slovakia.

It was further proposed that minority representatives as well as the respective international organisations, such as OSCE, Council of Europe and EU institutions should be actively involved in its drafting.

“If a law that the minorities don’t approve of is passed, it is worth nothing,” Kálmán Petőcz from the Roundtable told The Slovak Spectator prior to his meeting with Vollebaek on February 8 at which he presented his proposal. Petőcz added that this is true of the already existing minority law, which was voted against by the Hungarian minority deputies in parliament.

Furthermore, the Roundtable proposes that the State Language Act be suspended until the amended minority legislation is adopted, and it should be amended alongside or prior to the law on minority languages being adopted.

“Our aim is to get this proposal onto the agenda of the next government,” Petőcz said. “We have no other aim; it would be not only unrealistic but also counterproductive [if this government passed the new minority-related legislation]. I would not want this to take place before elections, as the legislation would be bad.”

Vollebaek also said earlier that he didn’t expect any significant changes in the Slovak minority-related legislation before the elections due to take place June 12 when the new government will be formed.

“However I have mentioned to the government that the minority language law situation should be analysed and discussed as soon as possible,” Vollebaek said.

“The thing is that the groundwork for the new law needs to be laid now, and this might take a long time, because the starting point is terrible – it is like a country after bombings,” Petőcz said.