LAST year was visibly marked by growing animosities between majority and minority groups in many countries, not only in Slovakia. But here, growing tensions between Slovaks and ethnic Hungarian and Roma minorities were clearly in focus, often fuelled by statements by politicians. With a relentless political campaign expected this year leading up to the national elections in June, observers say that minority issues and ethnic conflicts will not be spared, since the so-called Hungarian card belongs among the favourite campaign tools among Slovak politicians and suspicions of political parties buying Roma votes have become election folklore. 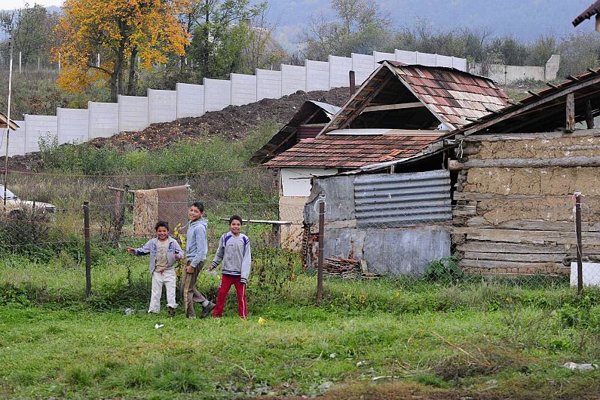 A wall was built in Ostrovany, purportedly to separate a Roma settlement from the village. (Source: TASR)
Font size:A-|A+

LAST year was visibly marked by growing animosities between majority and minority groups in many countries, not only in Slovakia. But here, growing tensions between Slovaks and ethnic Hungarian and Roma minorities were clearly in focus, often fuelled by statements by politicians. With a relentless political campaign expected this year leading up to the national elections in June, observers say that minority issues and ethnic conflicts will not be spared, since the so-called Hungarian card belongs among the favourite campaign tools among Slovak politicians and suspicions of political parties buying Roma votes have become election folklore.

An excursion through inter-ethnic relations in Slovakia in 2009, as well as the expectations for 2010, put the results from a recent survey into a frightening light. Residents of Slovakia regard ethnic tensions as the most powerful kind of potential social conflict in the country, according to the International Social Survey Programme (ISSP) 2009-2010 undertaken by the sociology department of the Slovak Academy of Sciences. According to the 1,159 respondents, conflicts between the majority population and the Roma minority are the most bitter, followed by tensions between Slovaks and ethnic Hungarians and then by discord between well-off people and those with lower incomes.

Ján Bunčák from the sociology department of the Philosophy Faculty of Bratislava’s Comenius University, who presented the results of the survey, said the tension between Slovaks and ethnic Hungarians has been “significantly politicised”. To support his assertion, he pointed to the fact that this kind of tension was reported most often by people from Žilina, who he noted are unlikely to be directly affected by interacting with ethnic Hungarians because very few live in Žilina Region.

Sociologist Michal Vašečka, the director of the Center for the Research of Ethnicity and Culture in Bratislava, said that minority issues show certain unique features in every country of central Europe.

“In Slovakia it is without any doubt the percentage of minorities out of the total population,” he told The Slovak Spectator. “More important, in negative terms, is ethnicising of the public sphere, which is more salient than in other countries of central Europe also due to the ethnicised Constitution of the Slovak Republic.”

Slovak society is not inclusive

Vašečka explained that Slovakia is defined constitutionally and historically in an ethnic way, as a state of Slovaks who coexist with minorities living on the territory, adding that this makes Slovakia a very un-inclusive society that will continue to have problems in broadly-understood minority issues unless Slovaks change to a more civic identity and try to build a political nation rather than an ethnic nation.

The ISSP 2009 – 2010 survey also revealed that almost two-thirds of Slovakia’s inhabitants are happy with their lives; Slovaks more so than Roma or ethnic Hungarians, according to the survey.

“Every society consists of the core group and outer groups,” Vašečka said. “Usually, people from the outer groups try to penetrate into the core and become part of the core. But once the core group is defined ethnically, it is exclusive and closed, those who are different and even those who would like to opt toward other identities have no chance to become part of the core society. In their perception (not necessarily according to law), they become second-class citizens.”

Minority issues in Slovakia usually involve either Roma citizens or ethnic Hungarians living in Slovakia – or both of them. Other minorities living in Slovakia rarely make the news or appear in any way as problematic for the country. According to Vašečka, this is because they are rather small or relatively well-assimilated. Inward migration has not become an issue for Slovakia yet and minority groups which could result from recent migration have practically no minority rights recognised by the state, in Vašečka’s opinion.

“But in less than one generation any of these groups will be considered by Slovaks as ‘problematic’ as well,” Vašečka said. “With all due respect to Slovaks – the ball is on the Slovak side.”

Slovak-Roma and Slovak-Hungarian tensions, and even animosities, both equally stand out as the primary minority issues within the country, but the reasons for them are very different.

The Slovak presidency of the Decade of Roma Inclusion initiative – a political commitment by European governments in cooperation with the World Bank and the Open Society Foundation to improve the socio-economic status and social inclusion of Roma – began in 2009. Observers from the non-governmental sector saw it as a chance for the Slovak government to find concrete solutions to the problems of the Roma community, such as housing problems and poverty; many say the government failed.

According to the website of the government plenipotentiary for Roma communities, there were an estimated 380,000 Roma living in Slovakia in 2001; many of them unable to find jobs, with low educational levels and living in unsuitable conditions. The reality of Roma settlements indicates that speaking about a failure of the government might not be an empty talk.

There have also been several mass marches staged by the ultra-right Slovenská Pospolitosť organisation in villages where Roma live, with the leader of the organisation suggesting that he could solve what he called “the gypsy issue” once and for all. And this person received a considerable number of votes when he ran for the post of president of Banská Bystrica Region in the 2009 elections.

Media have also covered the story of the village of Ostrovany in east Slovakia where the local government erected a wall, purportedly to divide the Roma settlement from the rest of the village.

The ISSP survey confirmed a tense atmosphere when it showed that over 70 percent of respondents said tensions between Slovaks and Roma were ‘sharp’ or ‘very sharp’.

“In the case of Slovak-Roma relations it is obvious that the vast majority of people, both Slovaks and Roma, are exhausted by 20 years of unfinished and not well-designed programs on the behalf of Roma,” said Vašečka.

According to Klára Orgovánová from the Roma Institute, who previously worked as the first Slovak government’s proxy for Roma issues, media are filled with news about Roma problems and that influences people’s perception of the relations: people are fed up with a topic that is not seen as developing positively. She says the government’s measures were not concrete and did not bring improvement to Roma problems.

“In addition, if people who also are suffering from shortages, hear politicians saying how much will be spent on solving the Roma problems, their aversion only grows,” Orgovánová told The Slovak Spectator. “Rarely are they informed, however, that only little of the European money is actually spent on Roma and that representatives of towns and villages often use those resources for reconstruction of school buildings, with the justification that out of 800 pupils there are 22 Roma children.”

However, Orgovánová admitted that criminality, along with growing poverty, has increased in Roma settlements and this is what has brought conflicts among Roma and non-Roma in some parts of Slovakia. Roma also feel that their economic and social position has deteriorated. According to Orgovánová, the attitude of the majority towards the Roma has also changed in the past ten years.

“Before, it was as if society was overcoming the attitude of throwing all Roma into one sack,” Orgovánová said, explaining that people had accepted the fact that there was poverty that required solutions, in the form of well-designed, long-term programmes and sufficient funding.


“Unfortunately, the current government threw doubts at the previous efforts and did not offer alternative solutions,” Orgovánová said, adding that the most striking of all Roma problems is high unemployment in some Roma communities.

The ISSP survey reported that 60 percent of the respondents said that tension between Slovaks and Hungarians is sharp or very sharp. Kálmán Petőcz from the Forum Institute believes that this reflects the current reality.

“It’s because they are constantly confronted with the picture of tense Slovak-Hungarian relations, either in the media or in the politicians’ statements,” Petőcz told The Slovak Spectator.

Slovak-Hungarian relations last year, within Slovakia as well as bilaterally across the border, fell to an almost tragicomic level. Slovakia’s amendment to its State Language Act caused turmoil among the ethnic Hungarian minority living in Slovakia and also within Hungary, where that country’s nationalist forces keep gaining support, as seen during the European elections, when the far-right Jobbik party received three seats in the European Parliament. The conflicts peaked at the end of last summer when Slovakia denied entry to the Hungarian president, who had been invited to speak at a ceremony unveiling the statue of Hungarian King Stephen in Komárno. Even a meeting of the two countries’ prime ministers which followed soon after in mid-September did not help create movement towards a friendlier atmosphere.

According to Petőcz, the tension between the Slovak majority and the Hungarian minority comes from the two contrasting views: representatives of the ethnic Hungarian minority claim that minority language rights in Slovakia are not effectively protected and the position of the Slovak government is that the status and rights of minorities are legally guaranteed and are at an above-standard level.

While observers tend to say that the position of minorities has deteriorated during the reign of the present government, which includes the nationalist Slovak National Party (SNS), Petőcz said that there is not much difference between the present and the previous governments in regard to what he sees as the basic problem: the Slovak majority does not want to admit that there is a problem with minority rights in Slovakia.

Petőcz also does not agree with the statements often made by the Slovak Foreign Affairs Minister, Miroslav Lajčák, that Slovaks and Hungarians should focus on what they have in common rather than on what is problematic.

“If you want to solve problems, you need to focus on those problems, and not make believe that they do not exist,” Petőcz said. “The tension comes exactly from the fact that the problems are being left unresolved.”

According to Petőcz, the Slovak majority sees ethnic Hungarians as foreigners rather than as regular citizens of Slovakia, which he says is a result of prejudices and myths that Slovaks have about Hungarians and their presence in the country.

Petőcz said the key to solving the problem would be the state’s active support of intercultural dialogue, for instance by teaching children at school that Hungarians are not some strange, foreign element, but an organic part of Slovakia, and that is how they should be treated.