THE MINISTRY responsible for one of the gravest scandals of Prime Minister Robert Fico’s government, the ‘bulletin-board tender’ of 2007 in which over three billion crowns (€100 million) in EU funds were awarded to an apparently pre-selected bidder, has a new gaffe to explain: a tender for €7.8 million whose conditions were so stringent that only one company seemed able to meet them. On February 10, the Ministry of Construction and Regional Development announced that it was scrapping the multi-million tender which it called last year to find a firm to evaluate the ministry’s use of funds from the EU. In explaining the decision, the ministry cited Prime Minister Fico’s decision to merge the construction ministry with the Ministry of Economy. 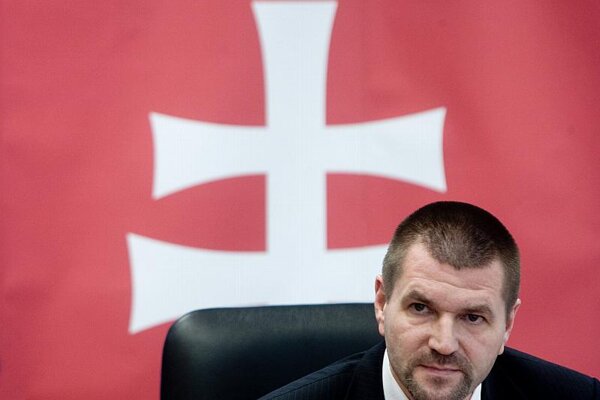 THE MINISTRY responsible for one of the gravest scandals of Prime Minister Robert Fico’s government, the ‘bulletin-board tender’ of 2007 in which over three billion crowns (€100 million) in EU funds were awarded to an apparently pre-selected bidder, has a new gaffe to explain: a tender for €7.8 million whose conditions were so stringent that only one company seemed able to meet them. On February 10, the Ministry of Construction and Regional Development announced that it was scrapping the multi-million tender which it called last year to find a firm to evaluate the ministry’s use of funds from the EU. In explaining the decision, the ministry cited Prime Minister Fico’s decision to merge the construction ministry with the Ministry of Economy.

“In light of the prime minister’s decision, we regard the rest of your questions as irrelevant,” said Construction Ministry spokesperson Linda Vaškovičová.

The ministry is led by Igor Štefanov, hailing from the Slovak National Party (SNS). Last year the European Commission ruled it would not pay for funds spent under the 2007 tender, because the tender notice had been published only on a bulletin board behind locked doors at the ministry. The law requires such large tenders to be advertised in publicly accessible places as well as on the online registry of the public procurement office. The only bidder in the 2007 tender was a consortium made up of companies close to SNS leader Ján Slota. After the media reported on the tender process, most of the three billion crown procurement was scrapped, but the ministry had still managed to pay out over €300 million crowns (€10 million) in high-priced legal and advertising work before the contract was cancelled.

While the ministry refuses to answer questions about the latest tender involving EU funds, local firms that specialise in such evaluation work claim that the tender was more than twice as expensive as it needed to be and that the requirements were defined in a way that only one international bidder could have met them.

According to several sources, probably only Deloitte could meet the conditions.


“We don’t comment on public tenders while they are in progress,” said Diana Karaffová from Deloitte.

According to the tender conditions, the winning firm was required to have annual turnover of at least €7.5 million for the past five years, to be insured for €1 million, and to have a specialised certificate in the area of project management.

“I don’t think that any one of those demands in itself was discriminatory, but it would not be easy to fulfil them all at the same time,” said Ľuboš Vančo, a partner with the Slovak branch of the KPMG audit firm. “That’s the reason we didn’t take part in this tender, and in fact I believe that only one firm took part.”

Slovakia’s Public Procurement Office (ÚVO) is also waiting for an explanation from the ministry. In January, ÚVO received two complaints about the tender from firms that were interested in bidding. One objected to the financial and economic requirements, while the other alleged it had requested an explanation of the tender conditions but that the ministry had not complied.

ÚVO called a meeting for January 28, at which it found the ministry had not submitted the tender documents required by law, and that without these documents ÚVO could not rule on the complaints. “We ordered the ministry to provide these documents, but so far it has not complied with this responsibility,” said ÚVO spokesperson Helena Fialová.

The Slovak Spectator consulted the tender conditions with the heads of four local firms that specialize in evaluating the use of funds from the EU. They asked that their names not be used, as they depend on state contracts for their livelihood.

The value of the tender, at €7.84 million, was considered to be several times what the work would really cost. The tender documents said that 40 evaluations would need to be performed; given that the cost of similar evaluations in the past ranged between €30,000 for smaller programmes funded by the EU to €250,000 for larger ones, these experts said the work should not cost more than €3-3.5 million, including a healthy profit margin.

“We based the value of the tender on information we gleaned from market surveys in the European Union,” said Vaškovičová of the ministry.

The requirement that bidders carry a €1 million insurance policy was also questioned as unusual and unnecessary, given that no damages can result from a poorly executed evaluation. In such cases, the most that Brussels would do is require the evaluation be corrected or redone.

“There is no danger of direct losses,” said Vančo of KPMG.

According to Vaškovičová, “the insurance requirement was there to protect the ministry and above all Slovakia, seeing as it is in the public interest that the contract be fulfilled.”

The ministry also demanded that bidders have an annual turnover of €7.5 million, which put smaller local firms at a disadvantage.

“Companies that offer advisory services need to be of a certain size to handle such contracts, they shouldn’t be mom and pop operations set up for a single job,” Vančo said.

The local firms objected less to the turnover requirement than to the demand that they provide proof of work done in project management – a field they said was unrelated to the main activity in question, evaluation. The ministry also required that these past project management contracts be worth €1.7 million or more, even though such large contracts have rarely been seen in Slovakia.

“We wanted to protect the ministry from companies that could have put it in a difficult position if the contract was not fulfilled,” Vaškovičová said.

The ministry also demanded an ISO certificate in project management, something that only a few companies in Slovakia have. KPMG, for example, does not have an ISO 10006/2003 certificate and relies instead on an “internal qualitative system”.

“This project is large and highly demanding,” said Vaškovičová in explaining the certificate requirement.

Slovakia is eligible to receive €11 billion from the EU for the 2007-2013 programming period. Charges of corruption and non-transparency in the tender process for using EU funds have been lodged in several cases, leading to warnings from Brussels and occasional refusals to release funds, as was the case in the bulletin-board tender.