A RUSSIAN athlete who moved to Banská Bystrica after being dropped from her native country’s biathlon team due to her “lack of potential” has won Slovakia’s first ever gold medal at a Winter Olympics. 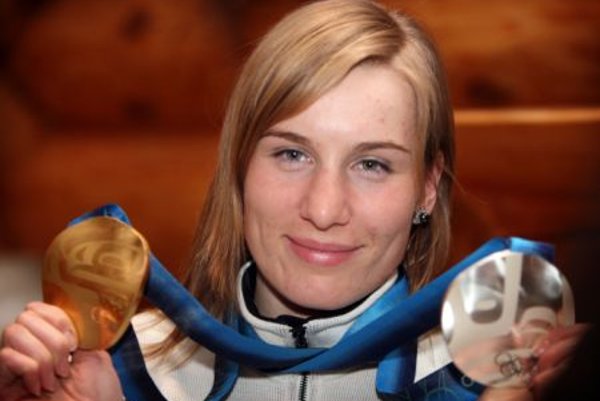 A RUSSIAN athlete who moved to Banská Bystrica after being dropped from her native country’s biathlon team due to her “lack of potential” has won Slovakia’s first ever gold medal at a Winter Olympics.

Anastasia Kuzminová triumphed in the opening 7.5 kilometre sprint of the biathlon competition, which combines cross-country skiing and shooting at targets from a rifle. She followed it up three days later with a silver medal in the 10km pursuit race on February 16.

Her Russian-born husband and coach, Daniel Kuzmin, said she had benefited from starting early in the first race, as warm weather quickly turned the track to mush and slowed the later skiers.

After an initially uncertain reaction to Kuzmina’s victory in Slovakia due to her Russian roots, the skier was embraced by the public. A celebration is now planned for her homecoming in Banská Bystrica. “It’s only just beginning to sink in what I’ve accomplished,” Kuzmina said after the second race.

Kuzmina has lived with her husband, also a biathlete, and their three-year-old son Jenisej in a modest block of flats in the central Slovak city since 2007. Before that she competed for her native Russia, but after she became pregnant she was dropped from the team by national biathlon coach Alexander Tichonov, who told her that she had no future as an athlete.

“Athletes in Russia are subjected to enormous pressure, and they are expected to produce results come what may,” said Natalia Kuzmina, Anastasia’s mother-in-law, in an interview with the Plus 7 dní weekly. “With all the competition, there is no room for people who don’t walk the straight and narrow. So when Anastasia got pregnant, they wrote her off.”

Anastasia came to live with her husband, who had moved to Banská Bystrica years before and had taken Israeli citizenship to make travelling and competing easier. While her son was still a baby she returned to training and joined the Dukla Banská Bystrica sports club.

“The big difference for me was that in Slovakia they allowed me to be with my family while I was in training,” Kuzmina said in a post-race interview for the Sme daily.

In 2008 Dukla supported her application for a Slovak passport, saying she would make a contribution to the country through the sport, and therefore deserved an exemption from Slovakia’s otherwise strict citizenship rules. Last year she was nominated to the Slovak biathlon team for the Vancouver Olympics, and although she broke her arm in a fall in October, she managed to recuperate in time for the Olympics.

Kuzmina, who is ranked only 28th in world biathlon, sang her new national anthem as she stood on the podium, and with her heavily accented Slovak charmed viewers who were initially sceptical of her “Slovakness”.

“Slovakia gave me another chance, and I’m very grateful,” she said after the medal ceremony. “When they were playing the national anthem I wanted to cry, but I couldn’t because all the liquids had been sucked out of my body during the doping tests.”

Competing for the headlines with Kuzmina’s successes were the fortunes of Slovakia’s ice hockey teams, but here the news was not so good. The women’s hockey team was blasted by Canada 18-0 in their opener while being out-shot 63-7, and then lost 6-2 to Sweden and 5-2 to Switzerland to exit the competition.

The men’s team lost 3-1 to the Czechs in their opener on February 18 due to poor defensive play and to taking too many penalties. While the loss did not dash Slovakia’s hockey chances, it brought back bad memories – Slovakia lost by the same score to the Czechs at the 2006 Olympics in Torino, and was eliminated after having got off to a strong start.

And just like four years ago, the Czechs exulted after the game while the Slovaks complained.

“Every time we even touched one of them he would throw himself on the ice,” said Slovak forward Pavol Demitra. “It was terrible, they were like a bunch of football players.”