Wages in Slovakia’s economy are increasing even though the economic crisis has slowed down their growth. But even this growth is perceived as deceptive, according to experts, as companies have rid themselves of less-qualified and lower-paid employees and are keeping those with higher qualifications and higher salaries, thus pushing up average wages in national statistics. The times in the recent past of job-hopping, changing jobs only to get a higher salary has ended and now employers are dictating salary conditions. The lower number of vacancies has dampened job applicants’ wage expectations and many are now ready to accept lower salaries than they had in the past. 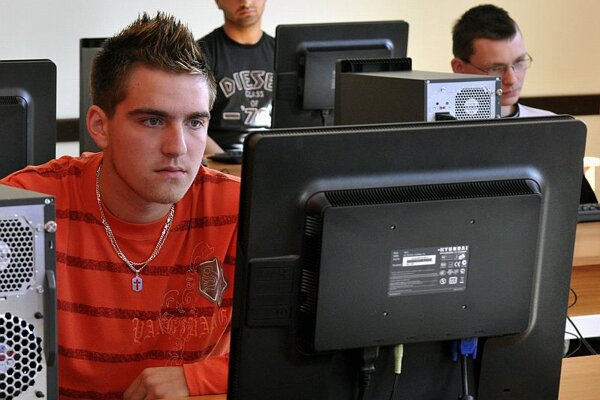 Wages in Slovakia’s economy are increasing even though the economic crisis has slowed down their growth. But even this growth is perceived as deceptive, according to experts, as companies have rid themselves of less-qualified and lower-paid employees and are keeping those with higher qualifications and higher salaries, thus pushing up average wages in national statistics. The times in the recent past of job-hopping, changing jobs only to get a higher salary has ended and now employers are dictating salary conditions. The lower number of vacancies has dampened job applicants’ wage expectations and many are now ready to accept lower salaries than they had in the past.

“According to statistical data, average wages are increasing, but this is only an illusion,” Peter Peregrim, area manager from Manpower told The Slovak Spectator. “Mainly people with lower wages are losing their jobs, and that has been misrepresenting the average wage. This situation will continue also into 2010. It is impossible to expect companies to increase wages, as the economy will recover only very slowly. Those employees of prospering companies, with a flexible part of their wages stemming from company resulta will be better off.”

The good news, according to Peregrim, is that a key sector which has propelled Slovakia’s economy in the past, the automotive industry, is increasing its production and is hiring new employees. But in spite of this, these companies are still in cost-saving mode and are curbing purchases of services. The huge business services sector, which includes marketing, consultancy and other services, has been suffering as a result of this.

In response to the crisis and fears of loss of employment households have also been behaving more prudently.

“People are saving; the retail trade, tourism, accommodation and restaurant services are failing,” he said, adding that lack of financing funds on the market, the cautiousness of investors and reduced government investments have hit the construction sector hard. “Let’s hope for a halt in the growth of unemployment. The growth in wages will be the only crème de la crème on which we can already count.”

When looking at individual sectors of Slovakia’s economy, the information and communication technologies (ICT) sector continued to report the highest average nominal monthly wage, at €1,282 for the third quarter of 2009 followed by the financial and insurance sector at €1,268. But in both these sectors wages had stagnated, with ICT showing a 0.4 percent growth y-o-y and the latter even dropped by 0.1 percent. Wages in public administration, defence and compulsory social insurance continued to report one of the higher average wages, €933, up 4.1 percent y-o-y. Other sectors reported far lower wages. The industrial sector had an average wage of €741, up 1.6 percent y-o-y while the construction sector reported only moderate growth of 0.5 percent y-o-y to €562.

The Statistics Office will reveal average nominal wages for all of 2009 in early March, but the Slovak Finance Ministry predicted in its Macroeconomic Prognoses for 2010, updated on February 10, 2010, that the average nominal monthly wage for 2009 was €738. Compared with 2008 this is an increase of 2.1 percent, with the ministry estimating growth in real wages of 0.5 percent y-o-y.

The 13th salary grew least in large companies with 1,000 and more employees, up by 7 percent to €821 while the category of companies with 11-20 employees reported the largest increase, up 14 percent, to €761.

“Top managers had the highest benefits, when 35 percent of them received an average of €4,905 added to their wages,” said Miroslav Dravecký, the Merces.sk project manager. “We have registered a year-on-year drop in financial benefits for auxiliary workers, qualified workers and employees in the services segment.”


For 2010 the Finance Ministry predicts an annual increase in the average nominal monthly wage of 1.6 percent. Factoring in the expected growth in consumer prices, the ministry predicts the decline of real wages to be 0.5 percent y-o-y.

Employer associations do not expect any rapid growth in wages this year.

“During the upcoming period we can expect stagnation or a moderate increase in nominal wages, which will not be bigger than inflation,” Martin Hošták, the secretary of the National Union of Employers told The Slovak Spectator. “But everything will depend on the further development of the crisis and execution of suitable measures by the government.”

Branislav Masár of Slovakia’s Federation of Employers’ Associations expects that “along with the recovery of economic growth, the situation will stabilise and wages will increase following the growth in productivity”.

“The average expected salary was increasing over a long term,” Miroslav Dravecký, the Merces.sk project manager, told The Slovak Spectator. “The increases were two-digit by the third quarter of 2008. This reflected the situation on the labour market when new working positions were created and people were changing jobs voluntarily for a better income. Over 2009 the year-on-year growth of expected salaries decreased significantly. In the fourth quarter of 2009 the average expected salary was €780, which was 6 percent more than during the same period in 2008.”

Marianna Turanová of Target SK, an executive search company, confirmed the trend of lower wage expectations also among job-seekers even in higher-level positions and top management.

“Candidates who are available on the market are willing to go significantly below their previous level,” she told The Slovak Spectator. “If they earned €5,000 in the past, they are now willing to accept €3,000.”

But this is not true in case of managers who have a job and are not actively looking for a position, according to Turanová. In this case it is up to clients of executive search companies to give them an attractive bid, one that does not include only salary. But they are aware of the reduced wage expectations and sometimes are often excessively pushing down the salaries which they offer, Turanová said.

Turanová also conveyed the experience of her company’s clients and said that the only group of job applicants who have not realised wage changes are recent university graduates.

“These graduates are keeping required salaries equivalent to a person with three years of work experience,” she said.

According to Dravecký, the situation on the labour market has changed dramatically when job applicants are willing to accept lower wage conditions at job interviews.

“There is currently rather a fight for jobs and not for advantageous wage terms on the labour market,” said Dravecký. “Now employers are the ones dictating terms in the labour market. So, I do not expect on average any increase in wage offers from the employers’ side. Of course, they will offer better wages to those employees or job applicants who are of key importance to them. These may be IT specialists, narrowly specialised experts in production technologies and so on.”