The tortuous path of joblessness

The global economic downturn has firmly implanted expressions such as mass layoffs, reduced work hours, declining demand and frozen wages not only to the vocabulary of the media but also to people who two years ago had rarely heard such expressions. 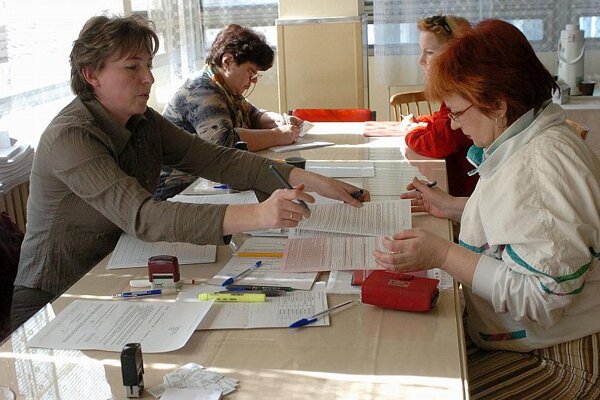 The global economic downturn has firmly implanted expressions such as mass layoffs, reduced work hours, declining demand and frozen wages not only to the vocabulary of the media but also to people who two years ago had rarely heard such expressions.

Slovakia’s jobless rate in December 2009 stood at 12.66 percent, which means that more than 335,490 people were immediately ready to take up jobs. Many observers predict that the unemployment rate will climb further and the unemployment rate over the first six months of 2010 might exceed 13 percent.

Most of the people who make up this number have had to walk the tortuous path of becoming and then being unemployed, for shorter or longer periods. The journey of a jobless person usually starts with an official notice of the termination of one’s employment contract; this process is regulated by Slovakia’s Labour Code. An employee’s work contract can be terminated: if the employer closes down or moves part of the business; if an employee is deemed redundant due to reorganisation; if the employee is unable to work due to permanent loss of work capacity; or if the employee fails to fulfil required work duties. Violation of working discipline can also result in the termination of a work contract based on Slovakia’s legislation. Employees who believe they were unjustly terminated can turn to their trade union or to a court.

There are several options for the unemployed at this point and the most common one is making a trip to one of Slovakia’s labour offices. There is a labour office in every district, making a whole network of offices that are there to help an unemployed person to find a job, preferably in his or her own region. Each office is part of the Centre of Labour, Social Affairs and Family. An unemployed person is not obliged by any law to register at the labour office, though many people choose this option because the office is required to provide free information about any job opportunities known to the labour office and a person must do so to be eligible for unemployment compensation.

Labour offices provide information not only about vacant and available jobs but also offer professional advisory services, re-training help or training opportunities, or even financial support for relocation for work, according to the Labour Ministry’s website.

The labour offices maintain a database of available jobs which are sent by employers to the labour offices. However, employers are not obliged by law to notify the labour offices of their vacant jobs, according to information provided by one of Bratislava’s labour offices to The Slovak Spectator. Each office also employs staff who seek out available work positions by connecting the employees by e-mail, post or phone and in this way regularly update the jobs’ database.

Unemployed persons must personally register by visiting the nearest office in their district of residence. They need their identification card, a copy of the termination of the employment contract, a copy of the document proving their highest achieved education (diplomas, certificates, and so on) and the copy of their employment summary in order to register.

The state has a special approach to groups who are disadvantaged on the labour market: people over fifty; people with physical or mental disabilities; school graduates over age 25; refugees; and people with lower qualifications. The labour offices provide consultations to individuals in these groups in preparing their CV or in preparing for a job interview and also offer them re-training courses to improve their opportunities on the labour market.

Once a jobless person is registered, he or she is obliged to report to the labour office once a month and provide evidence that they have been actively searching for work. If the office finds a job that it thinks is suitable for a registered job-seeker it contacts the applicant by phone, e-mail or personally.

When someone is employed, his or her employer pays payroll taxes which are transferred to Slovakia’s social insurer and health insurance companies on behalf of the employee. When a person loses his or her job either the labour office pays the transfers – if the person is registered as unemployed – or they can make the insurance payments on their own.

Voluntarily insured people must have paid the insurance premiums not less than two years.

An unemployed person must complete an application form at the social insurer’s local branch and submit confirmation from the labour office that he or she is registered as jobless. Persons who have worked in member states of the European Union or in Switzerland and had been insured are also eligible for unemployment benefits after they have filled out an E301 form, available at the labour offices.

If a jobless person is not insured by Sociálna poisťovňa or has worked less than three years, he or she is eligible to receive government assistance for those in material need. That amount is €60.50 per adult person, without children, per month. Different supplements can be added to this sum based on an individual’s family situation.

Private insurance companies also offer unemployment insurance as part of their existing packages, mostly as add-ons to life insurance policies. People can choose the sum of money that they can collect from the insurer in the event they become jobless. The amount of the premiums paid by those who choose this insurance varies.

Under the policies of most private insurance companies, the insured person must be registered as unemployed for at least three months. Moreover, benefits will not be paid if a person has been terminated less than six months after signing an employment contract or if the termination due to redundancy or the winding down of the employer. Finally, there are several groups of people who are not eligible to enter into a contract with a private insurance company: those who know they will be terminated and then want to sign a contract; people who have been employed for less than a year; and employees with an employment contract only for a definite time period.

Other ways the state helps

The state provides several other kinds of supplementary benefits to help people find a job or gain a new qualification – the law defines these as activation benefits. An activation benefit is provided during re-training or other courses which increase a person’s qualifications. These are also paid while someone is performing so-called community works. The amount of the activation benefit is €63.07 per month. The state also provides assistance to motivate people to find and keep a job and these tools are defined by the law on employment services. The amount and the time period during which the assistance is paid differ according to the type of assistance and the region where the applicant lives.

In partnership with European Social Fund, the Cantre of Labour, Social Affairs and Family differentiates three groups of applicants for state assistance: job applicants; employers; and disadvantaged groups of people. Each category has a different package of subventions from the state.

To ease the impact of global economic crisis on the labour market, the state adopted several crisis packages to preserve jobs, support the creation of new jobs and to support unemployed persons in establishing their own businesses.

If an employer is awarded state support to create new jobs, they must employ a newly-hired person for at least one year. The average monthly contribution from the state for such new jobs is €212. The employer is obliged to regularly inform the labour office about creating and sustaining these jobs. Part of this same crisis package also authorised the founding of so-called “social companies” which according to the original plan should have created as many as 10,000 jobs. Another part of the effort to sustain employment allows the state to pay part of the employer’s payroll taxes for 60 days within a one year period if the employer has preserved jobs in the face of difficult market or business conditions.

Jobless persons who find a job on their own without using the assistance of a labour office can also receive a subsidy added to their wages for 22 months. The amount paid is €159.06 in the first twelve months and €74.53 in the next 10 months. However, the gross monthly income of persons who want to claim this subsidy to their wage cannot exceed 1.7 times the current subsistence level, €185.19.

The state also provides assistance to people who become self-employed and commit to operating their business for at least two years. The state then pays the required transfers to the social insurer and health insurer. The sum is calculated from the minimal assessment basis, which is 12 times the average monthly wage. According to the Slovak Statistics Office the average monthly wage was about €718 in 2009 which means the minimal assessment basis is about €8,616, on which a self-employed person pay their payroll’ taxes.

Unemployed people have a few other job-search possibilities in addition to registering at the labour offices. They can use the services of professional human resources companies that will help them search for jobs or directly contact employers based on job ads. The choice of the type of HR company depends on the type of job or jobs the person is searching for as well as on the terms of employment sought and the qualifications of the unemployed person.

Contacting employers directly with a CV is a possibility and though it may seem to be the simplest way, it may take months to succeed, and one’s success depends on the job sector, the person’s qualifications, the needs of potential employers and many other factors.

Jobless persons also have the option to contact recruitment agencies. These agencies work with several employers and if there is not a suitable job currently available they retain the person’s data and can access it if a suitable job becomes available in the future. The recruitment agencies also advertise job offers and process responses of people who are interested. In order to be able to help a person the agencies need detailed information such as a professional profile, a history of work experience and why someone has become unemployed. A person’s CV should contain all this information but HR professionals say the document should not be too long, one page at most.

Temporary employment agencies are also active in Slovakia, an option for people who are seeking short-term employment with short-term, temporary contracts. Unemployed persons can also use job portals which advertise a fairly large number of jobs.

Persons who are unemployed who do not want to rely on help from the state or to again again an employee have the option to start their own business or can obtain a self-employed trade licence.

According to Branislav Sedláček, who became self-employed during his university studies, one of the main advantages of being self-employed is that one is only required to use only single-entry bookkeeping. But he added a disadvantage might be the high taxes that a self-employed person must pay to the social insurer and for health insurance, which are among the highest in the EU. He also said that to obtain a trade licence, a person must be 18 or older.