IN THE wake of the recent turmoil around the Slovak Democratic and Christian Union (SDKÚ), caused by Prime Minister Robert Fico’s accusations against it of money laundering, and the failure of the centre-right parties to form a broad pre-election coalition, the highlights of recent opinion polls are the declining numbers for SDKÚ and the increase for one of its main competitors. 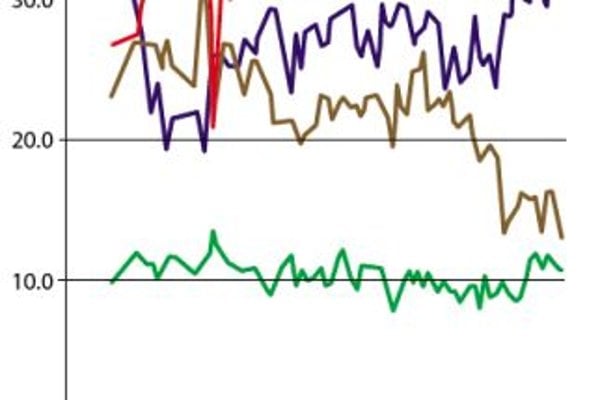 IN THE wake of the recent turmoil around the Slovak Democratic and Christian Union (SDKÚ), caused by Prime Minister Robert Fico’s accusations against it of money laundering, and the failure of the centre-right parties to form a broad pre-election coalition, the highlights of recent opinion polls are the declining numbers for SDKÚ and the increase for one of its main competitors.

Some observers, however, say that the preferences of voters for any individual party are less important than the fact that the recent polls show a rising trend for centre-right parties and continuous losses to those parties with a more nationalist agenda.

According to the recent voter preference poll published by the Focus agency on February 16, Smer’s support fell from January’s 41.4 percent of respondents to only 38.6 percent in February. The junior ruling coalition members did not fare much better, with support for the Slovak National Party (SNS) stagnating at 6.2 percent and support for the Movement for a Democratic Slovakia (HZDS) falling to only 5.8 percent.

However, the situation for opposition parties also showed some significant changes. After the centre-right parties’ failure to form a pre-election coalition, support for the SDKÚ fell from 15.2 percent in January to 11.3 percent in February. On the other hand, support for Richard Sulík’s Freedom and Solidarity (SaS) party increased over the past month from 5.1 percent to as much as 9.6 percent.

Other parties that would break the five-percent vote barrier and make it into parliament according to the poll are the Christian Democratic Movement (KDH) with 9.6 percent support, Most-Híd (which plans to form a common candidate list with the Civic Conservative Party) with 5.6 percent support and the Hungarian Coalition Party (SMK), with slightly over 5 percent support.

Kusý said that he believes there is a connection between the numbers reported for the SDKÚ and SaS.

“SaS can mainly fish for new voters in Dzurinda’s waters,” Kusý told The Slovak Spectator. At the same time, he added that voter preference polls are very fragile things, and can often show big swings.

According to political scientist Kevin Deegan-Krause, who deals with opinion polls and voter preferences in his research and posts on the topic regularly at www.pozorblog.com, the SaS numbers show a considerable recent rise in almost all polls, suggesting that the increase is not just a fluke.

“The rise should help SaS by encouraging voters to take it seriously as an alternative to other parties, especially SDKÚ, so an upswing should generate some degree of further rise,” Deegan-Krause told The Slovak Spectator. “At the same time, however, this kind of increase begins to invite media and opponent scrutiny, something that SaS has not had to face in the past.”

Although there have been other parties that have experienced similar jumps in popularity in polls, but without election results to match, according to Deegan-Krause, SaS’s increase is one of the more impressive ones for a new party. Unlike many other parties that experienced similar rises in support, SaS has actually been able to engage in a fair amount of real organisation – mainly through the internet.

“The open question is when does the party’s rise peak and how much does it fall back in the election,” Deegan-Krause said.

On the other hand, there is SDKÚ, whose decline has been almost perfectly parallel with the rise of SaS. Deegan-Krause pointed out that the February 2010 Focus poll is not the outlier in the trend, but rather it is the previous poll, held in January, in which SDKÚ was considerably higher than might have been expected. Except for that one month, Focus has shown a steady decline for the SDKÚ from around 16 to around 12 percent, as have other polling agencies.

The Slovak media reported on the recent poll saying that SDKÚ’s support has fallen due to PM Fico’s accusations of money-laundering. However, Deegan-Krause said he doesn’t agree with that hypothesis.

“The scandal may contribute to an SDKÚ decline in the long run but it is one that was already occurring because of the emergence of a relatively plausible, non-Dzurinda, pro-market party,” he said.

In broader terms, the poll has shown that the three centre-right parties – SDKÚ, KDH and SaS – have actually seen a significant rise over recent months when taken as a whole.

“That suggests SaS has helped to bring new voters into the mix and re-energise some disillusioned SDKÚ voters,” Deegan-Krause said, adding that this is actually a welcome step for the opposition.

According to Deegan-Krause, the big story behind it all has been the recent decline of the Slovak nationalist vote, comprising SNS and HZDS (see graph).

“[It’s] hard to say whether it will continue, but this is a big deal since it suggests that one or the other of these parties could fall below the threshold,” he said.