THE FINANCIAL and economic crisis has also dipped into Slovakia’s health-care system. The increasing number of unemployed Slovaks, coupled with stagnating wage growth and worsening payment discipline, have directly influenced the resources available in the health-care sector. In response, both state-owned and two private health insurance companies have merged and all are adopting cost-saving measures and intensifying their efforts to collect premiums on a timely basis and in the correct amount. 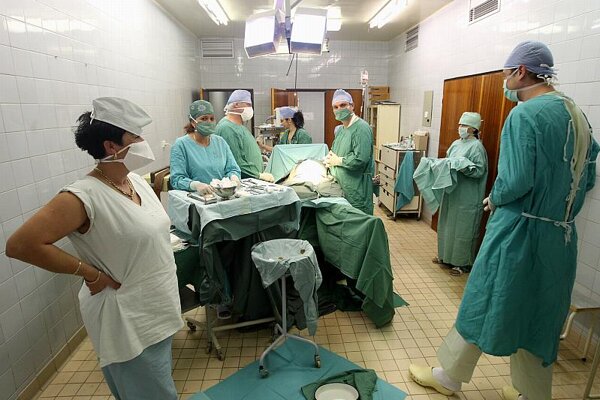 THE FINANCIAL and economic crisis has also dipped into Slovakia’s health-care system. The increasing number of unemployed Slovaks, coupled with stagnating wage growth and worsening payment discipline, have directly influenced the resources available in the health-care sector. In response, both state-owned and two private health insurance companies have merged and all are adopting cost-saving measures and intensifying their efforts to collect premiums on a timely basis and in the correct amount.

“Without question the health-care sector will have less money at its disposal than was originally budgeted,” Zuzana Čižmáriková, the spokesperson of the Health Ministry, told The Slovak Spectator. “This trend will be reflected also in the coming years and because of this health insurance companies have been forced to re-assess their revenues for 2010 and later, as well as their expenditures in individual segments in 2010, 2011 and 2012.”

Total expenditures by the Health Ministry for 2010 are projected at €1.440 billion, including almost €70 million in funds from the EU, according to the state budget for 2010.

Budget expenditures are €147 million higher than in 2009 but this increase is only due to higher compulsory health insurance premiums paid by the state for those that it insures, such as children, jobseekers, pensioners, women on maternity leave, and others, higher expenditures for the emergency services command centre and funds received from the European Union, according to Čižmáriková. Most expenditure items in the ministry’s budget are lower than in 2009; for example, capital expenditures were reduced by over 80 percent.

In 2010 the state’s premium payment for those it insures is 4.78 percent of the average wage in 2007, according to the SITA newswire. The rate has been reduced from the 4.9 percent when an additional 0.1 percent had been added for the purpose of preventive programmes. But in real numbers, the state’s monthly premium in 2010 is €35.42 compared to €32.80 in 2009.

According to Čižmáriková, Slovakia’s health insurers will have fewer funds at their disposal in 2010 than they originally planned. This is due to the increasing number of unemployed Slovaks, with the jobless rate forecast to reach 12.9 percent in 2010, the smaller growth in average wages than in past years and insured persons having less payment discipline.

In spite of this expected drop in revenue, the health insurers are not considering a reduction of payments to health-care providers. According to the plans insurers submitted to the Health Ministry, health-care providers will be able to provide health care in the same scope as agreed upon in 2009, said Čižmáriková. She added that changes in Slovakia’s drugs policy have resulted in significant savings.

“This year payments for those insured by the state will increase, which represents an annual increase of over €90 million, but with the drop in the number of economically active insured persons, the aim of VšZP will be to keep providing health care at the same level as last year,” Petra Balážová, VšZP spokesperson, told The Slovak Spectator.

Last year the insurer adopted a series of savings measures and that mode of operation will continue this year, Balážová said, adding that VšZP will also work intensively to collect due premium payments so it can use these funds for coverage of health-care costs.

Health Minister Richard Raši argued last year that the merger of the two state-owned insurers was the ideal prescription to cure VšZP’s financial ills, to eliminate certain impacts of the financial crisis and to preserve health-care financing at its current levels. The opposition political parties criticised the merger particularly because of a state injection of €65 million to the insurer’s share capital but other health-care experts have said the merger was a logical step in difficult economic times.

According to Balážová, the merger itself did not require any additional funds as it was covered from normal operating costs, adding that over the mid-term horizon, after the merger process and consolidation is completed, VšZP is expecting annual savings of 17 percent in its operating costs, or about €14.2 million.

Over the current year VšZP will also gradually optimise its network of branch offices in line with the approved merger project, she said.

“The merger is a technically and administratively demanding process, which should be complete in 2011,” said Balážová. “For now we have inter-connected information systems and agreed upon terms of contracts with health-care providers. All other processes we are carrying out continuously so that we do not decrease the comfort of provided services.”

According to Balážová, the merger will bring more savings and benefits to insured persons and less administrative burden for health-care providers as they now need to communicate with only one instead of two insurers.

Dôvera, the biggest private health insurer in the country, which merged with the Apollo health insurer at the beginning of 2010, is not wearing rose-coloured glasses either. It perceives rising unemployment and stagnating wages to be the key factors which will directly affect its revenues. It has also noted a decline in payment discipline among its insured beginning last year as its collection rate for premiums decreased to 95 percent in 2009 from 98 percent in 2008.

“We expect we will have 1 percent less this year than last year due to the crisis,” Zuzana Horníková, the spokesperson of Dôvera, told The Slovak Spectator. “Dôvera has been pursuing efficient operations over the long run and during the crisis we consider this principle to be even more important. On the side of expenditures we will focus on thorough supervision of the effectiveness of funds spent on health care and on the side of revenues we will put more stress on timely payment of the proper amount of premium.”

Dôvera expects that savings from its merger with Apollo will be fully visible only in 2011, Horníková said, adding that the merger is proceeding according to plan and the company is currently working on the consolidation of data from two information systems into one, a process which should be complete in mid 2010.

“For us, as the investor in both of these insurers, the reason to merge them was the fact that [they] have very similar values and their activities tend to complement each other – so there is no sense in them acting as competitors,” Martin Danko from the Penta private equity group told The Slovak Spectator in an earlier interview. “We are also convinced that an insurer with 1.5 million policyholders will have a great potential to be a real alternative to the state health insurer.”

According to Horníková, the merger will require one-off costs of €5 million in 2010. Operating costs of the combined insurer should be about €31 million, which is about €3 million less than the separate operating costs of Apollo and Dôvera before the merger.

Union, the third and the smallest insurer on the market, says it has also noticed worsening payment discipline. Over the course of 2009 its collection rate for premiums decreased by 2 to 3 percentage points and the company does not expect any significant improvement in 2010, Judita Smatanová, the spokesperson of Union, told The Slovak Spectator.

“As a consequence of the growth of unemployment the total volume of health insurance premiums has decreased because the premium paid by the state for an unemployed person is lower than what a working person is obliged to pay,” said Smatanová. “Moreover, for 2010 the state decreased the percentage share it pays for those it insures. Thus, we expect only a very moderate increase in premiums, of 1 to 2 percentage points per insured person, but due to worsened collection of premiums we do not assume any overall increase in available revenue to cover a potential increase in the costs of health care.”

Like the other health insurers Union is making an extra effort to collect due health insurance premiums and to make its whole process more effective, Smatanová said.


Health insurers’ revenue below plan in 2009

Revenues of the health insurance companies amounted to €3.427 billion in 2009, up 4.62 percent compared with 2008, the Health Care Supervision Authority announced on February 15, as cited by the SITA newswire. This figure includes the €65 million increase in the share capital of Všeobecná Zdravotná Poisťovňa (VšZP). But the health insurers originally projected their revenues to reach €3.382 billion, not including the €65 million injection and thus their revenues funds were about €20 million less than expected. According to the Slovak Statistics Office, the revenues of the health insurance companies had grown by 12.5 percent in 2008 compared with 2007.