FOUR years ago the system of medical emergency in Slovakia underwent extensive reform. A new network of emergency medical stations, many built on greenfield sites, was developed. The final selection of operating companies who competed for the four-year licences drew a lot of attention and some degree of controversy at that time. Similar attention is being repeated after the Health Ministry’s recent announcement of the licence winners for the current tender. While the Health Ministry and the winners of new licences say the tender was correct and conducted in accordance with the law, opposition political parties and companies that failed to get new licences are objecting to the tender, saying it lacked transparency and contained elements of cronyism. 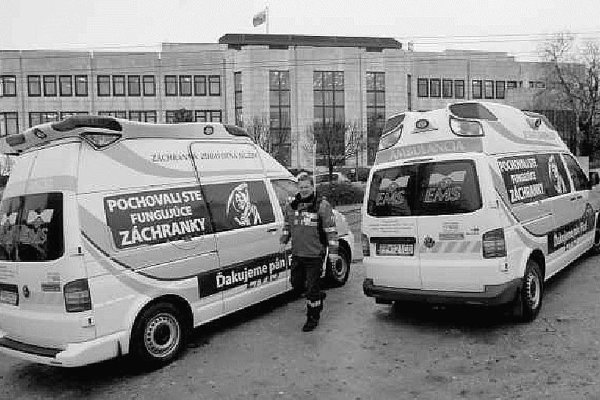 FOUR years ago the system of medical emergency in Slovakia underwent extensive reform. A new network of emergency medical stations, many built on greenfield sites, was developed. The final selection of operating companies who competed for the four-year licences drew a lot of attention and some degree of controversy at that time. Similar attention is being repeated after the Health Ministry’s recent announcement of the licence winners for the current tender. While the Health Ministry and the winners of new licences say the tender was correct and conducted in accordance with the law, opposition political parties and companies that failed to get new licences are objecting to the tender, saying it lacked transparency and contained elements of cronyism.

The network of 264 emergency medical stations across Slovakia was developed between November 2005 and July 2006 under the former health minister Rudolf Zajac. His aim was to create a modern network of emergency stations with well-equipped and well-staffed ambulances which could reach an urgent-care patient in less than 15 minutes. The plan was that health insurers would allocate €83 million annually for the emergency response system. A company operating within the system would receive €23,000 per month for each ambulance, including its crew, and about €0.60 per driven kilometre, the Trend economic weekly wrote in September 2005.

The operators for the emergency medical stations were selected via tender and received four-year licences. Last year the Health Ministry announced a new tender to select companies to replace the expiring licences. The tender was open for current operators as well as new applicants. The ministry announced three rounds of the tender covering the operation of 270 stations, a small increase in number compared to the original network. The first round was announced in May 2009.

The results of the final third round were announced in early February. Three operators – privately-owned Falck Záchranná, state-owned Záchranná a Dopravná Zdravotná Služba Bratislava, and Záchranná Služba Košice – finished as the most successful bidders. For Falck, it was an increase from its original 74 stations to 90 locations. The state-owned company based in Bratislava jumped from 9 locations to 53. The Košice company received licences for 38 stations, up from 5 stations in the previous period. The licence holders will receive almost €28,000 monthly for each ambulance that has a doctor onboard and almost €17,000 for those without a doctor, according to the Sme daily.

The results and the course of the tender have garnered criticism from opposition MPs as well as from the previous licence holders who were unsuccessful for the upcoming four years. Among those who were unsuccessful in the most recent tender are companies that are members of the Association of Emergency Medical Services Providers (APZZS), which claims that the tender was not held in accord with the law and charges that there were elements of cronyism in the process. Association members have already filed complaints with courts.

“Nobody except Health Minister Richard Raši knows why some companies won and some others did not,” Viliam Novotný, deputy for the Slovak Democratic and Christian Union (SDKÚ) and the chair of the parliamentary committee for health care, told The Slovak Spectator. “The ministry has so far concealed criteria, which raises doubts over the transparency of the whole tender. The surprising results from all three rounds of the tender strengthen the doubts.”

According to Novotný, the state-owned emergency service had significant success even though there are indications that it did not meet the basic conditions of the tender. He added that he did not understand how so many of the current operators of the emergency service, those with four years of experience in building and operating the emergency stations, could have failed.

“They deserve an explanation, why they failed in the tender,” said Novotný, who will initiate an enquiry into the tender at the next session of his parliamentary committee.

For members of the Association of Emergency Medical Services Providers who were unsuccessful it will likely result in cessation of operations and liquidation of their firms.

“The unsuccessful providers have so far received only verdicts from the first and second rounds of the tender; they have not yet received verdicts from the third one,” Ján Hencel, the chairman of APZZS told The Slovak Spectator. “But reasons for failure are absent in the verdicts. It is only written that the commission so decided. We have been pointing out this problem since August and we are constantly asking the Health Ministry to give us explanations of the verdicts.”

According to Hencel, Minister Raši has not fulfilled his promise to make this information available. The unsuccessful participants in the tender have not been able to examine documents related to the tender and APZZS sees that as at odds with the law on administrative proceedings.

“The Health Ministry will permit applicants to have a look at their documents but this will be only after the whole third round is over,” Zuzana Čižmáriková, the spokesperson of the Health Ministry told The Slovak Spectator. She said the process is not yet complete as there are still some deadlines for challenging the verdicts as well as processing of data.

APZZS has said that it views the tender as unlawful and laced with elements of cronyism and manipulation.

According to Hencel about 2,100 emergency service workers have needed to change their employer and about 150-300 emergency workers will become jobless due to what he called the unlawful steps by the Health Ministry. Moreover, he said equipment owned by the past operators of emergency service stations which is worth roughly €6 million to €7 million will no longer be used.

The Health Ministry maintains that the whole tender process was held in a manner unchanged from four years ago, that the same steps for the selection proceedings, the same conditions and the same evaluation criteria were used, said Čižmáriková. Regarding the charges made by APZZS, she said that it is difficult to speak about them because originally Falck Záchranná from Košice and ZaMED from Komárno, which had 93 stations in total, were members of the association – a majority of the stations were held by members of the association.

Ján Šteso, general director and the head of the board of directors of Falck Záchranná told The Slovak Spectator that his company fully respects the results of the tender and considers each station for which it won a licence a success. He ascribes the success of the company to the past experience of its staff as well as to the fact that Falck Záchranná is part of the international Falck group with headquarters in Denmark and a 100-year tradition in providing emergency services.

Falck Záchranná, together with LSE, Záchranná a Dopravná Zdravotná Služba Bratislava and Záchranná Služba Košice announced the launch of a new association – the Association of Emergency Medical Service, the Zdravotnícke Noviny weekly wrote in October 2009. They decided to do so claiming that APZZS had not fulfilled the goal for which it was launched: to represent the interests of providers of health emergency services and to push for measures to increase the quality of care for patients.

Thus far, some members of APZZS have filed complaints against the verdicts of the Health Ministry from the first round. The association has also asked the General Prosecutor’s Office to review the lawfulness of the tender, according to Hencel.

“Certainly we will continue solving this situation in a legal way,” said Hencel. “We are also considering a turn to the European Commission for assistance.”

Minister Raši has said some some changes in the system of granting licences may happen. The ministry has started preparing an amendment to legislation related to the emergency medical services but has said it sees as realistic its adoption only after the June parliamentary elections. The ministry regards, for example, the current four-year term of the licence as too short, Čižmáriková told The Slovak Spectator.