On February 11, around 130 students representing 31 schools from all over Slovakia arrived at Sukromné gymnázium in Žilina to participate in the third Speaker’s Corner competition. 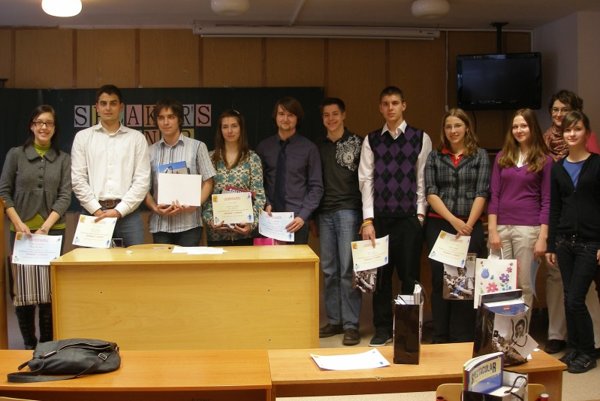 On February 11, around 130 students representing 31 schools from all over Slovakia arrived at Sukromné gymnázium in Žilina to participate in the third Speaker’s Corner competition.

Speaker’s Corner was established in 2008 with several aims, not least to provide students with a forum (a real one as opposed to online) to express their ideas in English. Another objective was to promote some of the more formal aspects of spoken English; it was felt that even though Slovak students are having more and more frequent contacts with English speakers and are becoming more fluent in the language, they are also developing some of the habits of English-speaking teenagers. This is not a bad thing in itself, but needs to be balanced by a realisation that more formality is required on occasion. Finally, the competition was seen as a way to connect schools and for students and teachers to listen to spoken English from students at schools other than their own.

The competition divides students into categories, based on actual age rather than school years. For the semi-final round, students select a topic several weeks ahead of the competition. The topics are all based on, or related to, Maturita speaking topics. Students have to speak on their topic for a set time and then react to questions from the judging panel or other students. This year, there were two committees of junior students and four each of intermediate and senior students. The best speakers from these committees entered a final round later in the day. Here, they drew a new topic for which they had fifteen minutes to prepare before speaking. In both rounds, the judging panels consisted of teachers from different schools including, where possible, one judge from the host school and one native English speaker.

The standard of this year’s competition was impressively high. It was very quickly apparent how well-prepared students were. Most had done some research to find facts to back up their arguments while many had conducted small surveys to gauge opinion. The majority also appeared to have timed their speeches beforehand and were thus able to meet the time limits. Without exception, the speeches were interesting and indeed the whole day provided a valuable insight into how young Slovaks think about certain topical issues.

One observation is that, while the level of English on display at the competition was high, there were certain differences between students who either attend bilingual schools or have spent long periods in English-speaking countries and those attending ‘traditional’ schools who have not studied abroad. The difference was not so much in linguistic level but in style. The former group, counting on their fluency in the language, tended to employ more rhetorical flourishes, including humour and gesture. Those who had not studied abroad tended to adopt a more serious approach, relying on sophisticated content and a rich formal vocabulary. Faced with these stylistic differences, the judging panels had a complex task to evaluate the speeches and choosing winners proved extremely difficult at times. One regret was that due to the numbers of participants and the limited time, we could not send more speakers to the final round.

Overall, it was an enjoyable, stimulating day. We would like to thank the students who participated and the teachers who accompanied them and hope to welcome as many of them as possible again next year.