KDH says its priority is Smer in opposition

THE CHRISTIAN Democratic Movement (KDH) announced that a post-election partnership with the currently ruling Smer party will only come into consideration if other opposition parties join as well. The party’s announcement came after a long period of silence on the question of whether this opposition party would be willing to create a coalition with the left-leaning Smer after parliamentary elections this summer. 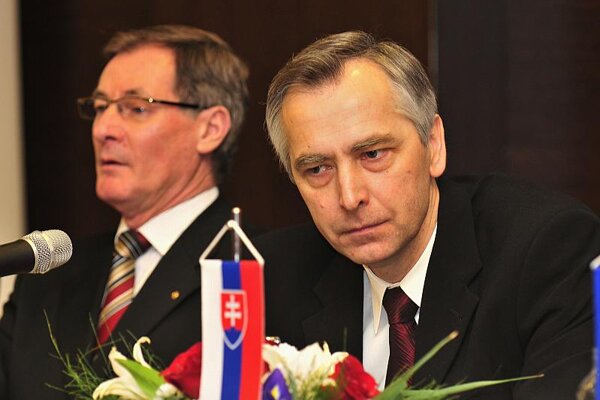 THE CHRISTIAN Democratic Movement (KDH) announced that a post-election partnership with the currently ruling Smer party will only come into consideration if other opposition parties join as well. The party’s announcement came after a long period of silence on the question of whether this opposition party would be willing to create a coalition with the left-leaning Smer after parliamentary elections this summer.

Although they have put their message across in a rather complicated manner, observers say the message is actually quite clear. The Slovak Democratic and Christian Union (SDKÚ), the strongest opposition party, has ruled out any form of cooperation with Smer more than once.

The KDH celebrated its 20-year anniversary on February 20 at an extraordinary session in Žilina. At the event, also attended by the speaker of the European Parliament, Jerzy Buzek, KDH chairman Ján Figeľ announced that the party’s highest priority is to do everything possible to ensure that the next government is made up of centre-right parties, with Smer left in the opposition. However, unlike the SDKÚ, the KDH remains open to the possibility of cooperating with Smer as a ‘crisis alternative’.

“If it’s not possible [after the elections] to create a government in Slovakia without Smer, the stable parties should look for [an alternative] in the form of a wide coalition, which is commonly used in the west,” Figeľ said, as quoted by the SITA newswire. “It would have to be not only balanced and stable, but also have a precisely defined political programme and rules.”

KDH vice chairman Daniel Lipšic explained to the Sme daily that such a coalition could not be formed without the cooperation of SDKÚ.

“If the SDKÚ or Smer say no, a wide coalition will not be possible,” Lipšic said.

SDKÚ representatives have reconfirmed their past decision and repeated that cooperation with Smer is completely out of the question. They also accused KDH of being two-faced in the matter.

“I am very sorry that just a few months before the elections, KDH is considering some kind of ‘crisis alternative’,” said Stanislav Janiš, head of the SDKÚ parliamentary caucus and the party presidium’s candidate number 8 for its primary elections, as quoted by the TASR newswire.

Figeľ responded in a written statement in which he discounted Janiš’s accusations, adding that KDH rejects Smer’s politics and will do everything it can to ensure a victory of centre-right parties in the June 12 elections.

“The actual winner and the formal winner of the elections can be different [parties] and I will make every effort to fulfil our vision,” Figeľ said, adding that if a crisis alternative is needed, KDH would accept it out of responsibility to the country.

Political analyst Grigorij Mesežnikov said SDKÚ should not be so quick in condemning their fellow opposition member. He sees KDH as taking a somewhat softer approach than SDKÚ. In addition, by accepting the possibility of a coalition with Smer only on the condition of SDKÚ’s cooperation, KDH has demonstrated its closeness to SDKÚ and given it space to influence the composition of any possible coalition with Smer.

“KDH is showing that it prefers other coalition compositions to one with Smer,” Mesežnikov told The Slovak Spectator. “So I think that SDKÚ should really consider how it reacts in this case. On one hand, KDH admits the possibility of cooperation with Smer, but on the other hand they have conditioned it with cooperation from SDKÚ, so they are showing definite solidarity with SDKÚ.”

Mesežnikov added that, in his opinion, SDKÚ and KDH will remain strategic partners – before and after the elections. He also believes that a potential coalition of centre-right parties with Smer, which KDH has said is an option (although an emergency solution rather than a preferred combination), is practically impossible, not only due to the disapproval by SDKÚ but also because it is very unlikely that Smer will accept the terms of the centre-right parties and will also likely not accept having a secondary role in the coalition.

“On top of that, such a coalition wouldn’t even be necessary because Smer could easily have a majority without KDH and with just SDKÚ,” Mesežnikov said.

As for SDKÚ, it is still not clear who will lead the party in the elections. After the party’s chairman Mikuláš Dzurinda vacated the first position on the party’s candidate list, it raised the question of who will be the party’s ballot leader. The party’s candidate list will be settled on February 27 in SDKÚ’s primaries, where party members will choose between Iveta Radičová and Ivan Mikloš. SDKÚ has already announced that, if it comes among the first in the parliamentary elections and is able to form a government, their candidate for prime minister would be the election leader and not Dzurinda.

Meanwhile, two marginal parties on the political scene have announced they are joining forces with the big players.

In late February Ivan Šimko, who, in 1998, left KDH for SDKÚ, which he co-founded and which he also left in 2003 after conflicts with Dzurinda, announced that Misia 21, another party he founded more recently and of which he was the chairman, will convert itself into a civic association and that he will return as a member of KDH.

Šimko founded Misia 21 in 2006, after quitting the Free Forum (SF), a party he established after his split from SDKÚ along with another political renegade, Zuzana Martináková. He quit as a member of SF after he lost to Martináková in the election of the party chairman.

Ivan Šimko said that his biggest political mistake was that he did not apply for membership in KDH immediately after leaving the SDKÚ.

“My departure from KDH five years ago was painful,” he said, as quoted by SITA. “In SDKÚ I increasingly felt that I was not at home. That was when I should have understood that my political home is in KDH.”

Figeľ welcomed Šimko’s decision. In his speech on February 20 in Žilina, he invited all those who are considering entering or returning to the party to do so – on the condition that they are of good will and agree with the programme.

Mesežnikov believes that Šimko’s return to his mother party is only his own private issue and will affect neither KDH nor the Slovak political scene in general.

“Misia 21 didn’t have voters, it was an incarnation of empty space in the political spectrum,” Mesežnikov said.

Similar movements towards merger are also being seen on the other side of the political spectrum. The Movement for Democracy (HZD), a party founded by Slovak President Ivan Gašparovič in 2002, after he and several of his colleagues were excluded from the Movement for a Democratic Slovakia’s (HZDS) candidate list for parliamentary elections, will cease to exist by the end of 2010. Delegates at the party’s congress, held in Bratislava on February 20, recommended that party members register with Smer and announced that party leaders will now work towards merging with Fico’s party, the SITA newswire reported.

HZD chairman Jozef Grapa said, as reported by SITA, that the party would support Smer’s candidate list in the parliamentary elections.

PM Fico was also present at the congress. He told delegates there that Smer’s doors are open to HZD members.

“It’s a reward for HZD, this very weak and marginal party, for what it has done to strengthen Smer’s position in power,” Mesežnikov said, adding that the move is of no particular importance for Smer from the viewpoint of voter support, as the party does not bring a significant electorate with it.

According to Mesežnikov, the purpose of Smer’s merger with HZD is, as was the case with other smaller leftist parties that Smer has absorbed along the way, to ‘clear the air’ around Smer, “so that there is no space for any alternatives that could lure away some of Smer’s voters.”

None of those parties influenced Smer’s programme before, and, according to Mesežnikov, HZD will not do so now.