THE ELATION brought on by news of the Slovak ice hockey team’s success and the medals that have been collected since the start of the Olympics has been slightly dampened by an anonymous e-mail that literally flooded mailboxes and the Facebook walls of Slovaks, harshly criticising the Slovak Representative House in Vancouver. 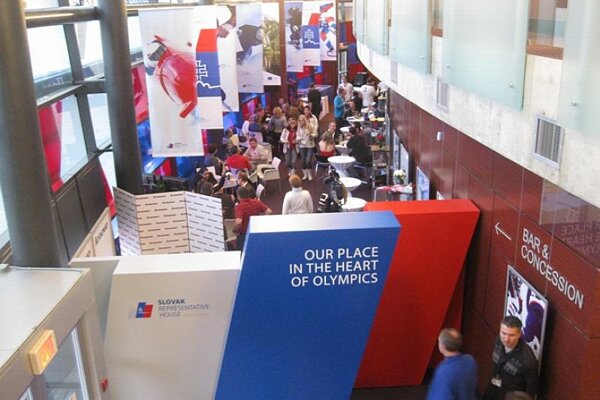 THE ELATION brought on by news of the Slovak ice hockey team’s success and the medals that have been collected since the start of the Olympics has been slightly dampened by an anonymous e-mail that literally flooded mailboxes and the Facebook walls of Slovaks, harshly criticising the Slovak Representative House in Vancouver.

For the first time since its founding in 1998, the Slovak Representative House at the Olympic Games this year is open to the public to visit as guests – unlike previous years, when the House was reserved for the Slovak Olympic team and invited VIPs. In Vancouver, the public can attend the House’s cultural events and lunch and dinner buffets – but for a fee, which was the main subject of the anonymous criticism.

The e-mail, signed ‘Petra’, tells a story of two Slovak girls living in Canada who attended the House’s programme and afterwards wanted to have some drinks at the bar, but were told that they were not allowed to do that, as the food and drinks were only for guests who bought a lunch or dinner ticket, for $60 CAD and $115 CAD respectively. ‘Petra’ continues writing about her experience and how she and her friend volunteered to sell tickets at the entrance of the House one evening.

“All the visitors, including Slovaks, Canadians and tourists from other countries, turned on their heels and left disappointed when they were told the price of the ticket,” the e-mail reads, claiming that not one person bought a ticket that night and that the House that night only hosted a few Slovak VIPs, the Slovak Representative House project managers and the staff. They also complained about the language skills and the attitude of an unnamed manager at the House.

Petra Siváková from the Black Tea – B.M.A. consortium, which was contracted to prepare and manage the Slovak Representative House in Vancouver 2010, confirmed for The Slovak Spectator that the price of the lunch ticket is $60 CAD and that the dinner ticket is $110 CAD. The lunch ticket allows the holder access to a buffet of Slovak culinary specialties and a selection of the best Slovak wines and beer, as well as coffee and soft drinks, from noon to 15:00, while the dinner ticket is for entrance from 18:00 to midnight. Live music and a screening of the Olympics are included in the price.

According to Siváková, there are about 100 lunch tickets and 50 dinner tickets available every day, due to the limited space at the House.

“The popularity of the House grows every day,” Siváková told The Slovak Spectator. “On Saturday [February 20] we sold out for lunch within an hour. […] The dinner sold out even before it started, so, to those who came after 18:00, we could only offer a short tour around the House, which we also offer to everybody who wants to see it before buying tickets.”

Slovak Foreign Affairs Minister Miroslav Lajčák rushed to defend the reputation of the Slovak Representative House, saying he himself received the e-mail from the mysterious ‘Petra’ about 30 times, and said that he sees it as an attempt to discredit the House, the SITA newswire reported.

“I’m sorry that something that earns praise abroad gives someone at home the need to criticise and libel it,” Lajčák said, as quoted by SITA.

The praise abroad that the management of the Slovak Representative House was referring to is mainly an article in the local Vancouver Sun, in which columnist Sally Fralic, who lives 25 floors above the House, wrote very positively about the whole project.

“Slovak House, unlike many of the international houses at these Olympics, is open to the public,” Fralic wrote. “It charges $60 for lunch and $115 for dinner, and that means lots of Slovak wine and beer and all the above food and more, plus a fruit, cheese and dessert table with apricot cake, poppy seed roll, apple strudel and that’s when I couldn’t eat any more. And if you think the price of admission is too steep, then you haven’t spent any time in the Olympic houses that charge an arm and a leg just for a pint.”

The article continues with a rather PR-ish account of the delicacies and treats that one can taste and experience at the House. However, Fralic was not the only one positive about the project. The Globe and Mail also mentioned the House in an article about restaurants and dinner venues in Vancouver during the Olympics.

“The best hospitality house food I’ve found so far is at the Slovak Representative House and at the Aboriginal Pavilion – but it doesn’t come cheap,” Alexandra Gill wrote in her article, praising the Slovak traditional cuisine and wines.

“But my favourite part of the meal were the waiters,” the article concludes. “Only during the Olympics will you find charming older gentlemen in red hockey jerseys doling out smoked cheese strings and dainty pork terrines with flourishing silver service. Enjoy it while it's here.”