SLOVAKIA'S biorhythm changed this week. Hundreds of thousands of people turned on their TV sets at six in the morning to watch the country’s hockey team play at the Olympics. The prestigious match against the Czechs, the shocking win over the Russians, the decisive duel with the Norwegians, as well our historic defeat of Sweden in the quarter-finals, all happened at the same time, o šiestej. 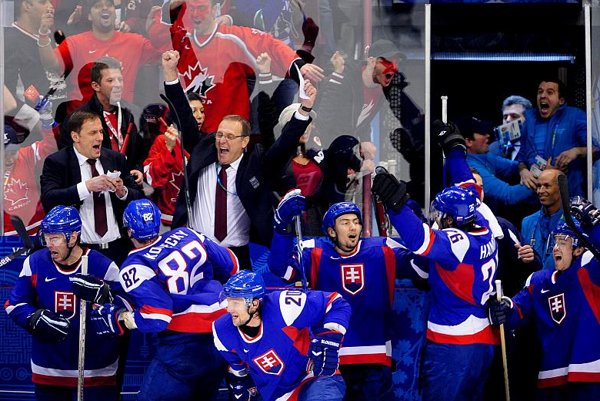 SLOVAKIA'S biorhythm changed this week. Hundreds of thousands of people turned on their TV sets at six in the morning to watch the country’s hockey team play at the Olympics. The prestigious match against the Czechs, the shocking win over the Russians, the decisive duel with the Norwegians, as well our historic defeat of Sweden in the quarter-finals, all happened at the same time, o šiestej.

Early morning is not a good time to meet in a pub, or throw a huge party, so most people enjoyed the games alone or with their family. But the country nonetheless shared a common vibe and most conversations revolved around a single topic – hockey. Slovakia has never made it this far at an Olympic tournament, so regardless of the outcome of the last two matches, the results will be remembered for a long time.

Some of the players who have achieved it, such as Miro Šatan, Źigmund Pálffy, and Jozef Stűmpel, had already played at the first Winter Olympics Slovakia attended as an independent country, in 1994 in Lillehammer. But over those sixteen years the team has gone through some important changes, which nicely illustrate the transformation the country itself has gone through:

1. Slovakia has become better known. In 1994 the country, as well as its hockey team, were only a year old. Although many people have still not heard of Slovakia, which many abroad still confuse with Slovenia or some obscure region where donkey carts represent the main means of transport and flushing toilets are found only in the monarch’s palace, now thanks to Slovak athletes, baby-sitters, a flat tax, and NATO and EU membership, it is much better recognised than in the past.

2. Slovaks are more experienced. In 1994, Miro Šatan became the games’ top scorer. But he had not previously played in any foreign league. Today’s team is made-up almost exclusively of players from the NHL or the Russian KHL. The same is true on all fronts – thousands of Slovaks have spent time working or studying in the US, Britain, or Germany. Courts, ministries, and other institutions remain weak, but they are stronger than at the times when the authoritarian PM Vladimír Mečiar ruled the country.

3. Self-confidence has gone up. In the 1990s, the Slovak hockey team had moments of brilliance. But when things started going wrong, only too often it collapsed, losing its focus and venting frustration instead of keeping a cool head. In the quarter-finals against the Swedes, the team was able to come back into the game even after losing its two-goal lead within a couple of seconds. But it’s not just hockey. Open borders, the adoption of the euro, visa-free travel to the US, or relative economic stability at a time when old EU members such as Greece face the threat of severe hardship, also contributes to the feeling that Slovaks have become the equals of other Europeans.

Slovakia is now much further along than sixteen years ago. But despite all the changes, one thing remains the same – Slovaks still love hockey. Enough reason to get up o šiestej.