THE ECONOMIC crisis significantly cut state revenues from taxes. Revenues from taxes in 2009, which account for a high proportion of overall state income, were 11.1 percent lower than in 2008. Collection of value-added taxes particularly lagged behind, the SITA newswire wrote in early January, citing figures from the Slovak Finance Ministry. 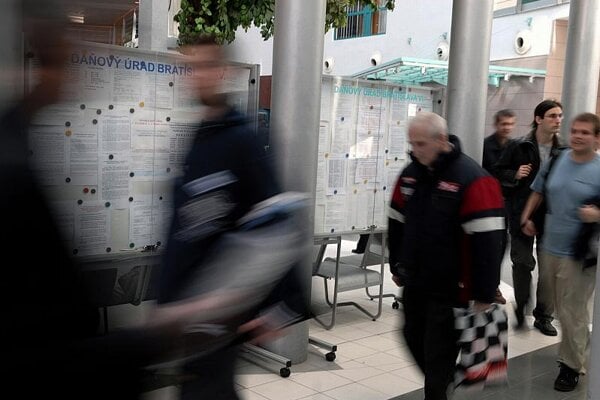 THE ECONOMIC crisis significantly cut state revenues from taxes. Revenues from taxes in 2009, which account for a high proportion of overall state income, were 11.1 percent lower than in 2008. Collection of value-added taxes particularly lagged behind, the SITA newswire wrote in early January, citing figures from the Slovak Finance Ministry.

For income taxes paid by corporate entities the actual amount collected was 0.4 percent higher than in 2008 and amounted to €2.13 billion. This exceeded the revised budget plan by 2.5 percent. Income taxes paid by private individuals amounted to €28.58 million when the projection had been €39 million, thus reaching only 73 percent, according to the Tax Directorate of the Slovak Republic.

January is better than last year

Tax collection in January 2010 was 14.9 percent higher than the level of January 2009 and amounted to €760.8 million. Better collection of value added taxes contributed to the positive result for January 2010.

Tax revenues are projected at €8.620 billion for 2010, according to the Tax Directorate. Of this amount value added taxes are expected to account for €4.5 billion, excise taxes for €1.993 billion and income taxes and capital gains taxes on individuals and businesses should bring about €2 billion.

Taxpayers earmark €55 million for non-profits in 2009

The beneficiaries of the 2 percent donations which Slovaks can authorise from their income taxes received a total of €55.18 million in 2009, up 12.2 percent from a year earlier. In 2009, 503,253 individual taxpayers and 30,078 corporate taxpayers assigned 2 percent of their income tax to NGOs and other non-profit organisations.

In 2009, the number of organisations receiving the contributions grew to 9,098, an increase of 17.3 percent, SITA reported based on data provided by Miroslav Dobák, the Tax Directorate’s spokesman. The total sum contributed by taxpayers as their 2-percent designation of assessed income tax has been gradually rising for several years.

The way corporate entities assign 2 percent of their paid income tax to eligible beneficiaries will be undergoing gradual changes as of 2011.

According to the amended law on income tax, the current 2 percent of income tax paid that corporate entities are entitled to assign to eligible beneficiaries, will decrease gradually to 0.5 percent by 2018. Corporate entities will also be obliged to donate extra money to beneficiaries if they want to be able to allocate the full portion of their tax assignation.

Slovak companies establishing or moving their corporate seats to countries known as tax havens increased steeply in 2009. According to ČEKIA, the Czech capital’s information agency, its analysis of Slovakia’s commercial register found that the number of owners of Slovak companies originating from destinations regarded as tax havens rose by 27 percent to 2,443 over the course of 2009. This accounts for 1.56 percent of the 157,000 companies operating in Slovakia.

The Netherlands, Cyprus, and Luxembourg rank among the most frequent countries while Seychelles and Lichtenstein registered the biggest increase from last year, SITA wrote in early February.

“In general the steep increase in the interest of Slovak companies in moving their seats into a tax haven is related to the economic crisis and fears of a hike in taxes as well as the business and political atmosphere in Slovakia,” said Petra Štěpánová, analyst with ČEKIA, ascribing the higher interest to media pressure generated by the EU and the US government to fight against tax havens. She said that at that time many entrepreneurs began to realise the advantages of more tax-friendly and business-friendly bases for their businesses.

The number of Czech companies with seats in tax havens increased by 24 percent and made up 3.45 percent of all Czech companies in 2009, more than double the rate in Slovakia.

According to Štěpánová, the Czech Republic caused the leap in the share of companies with seats in tax havens during recent years when Slovakia was regarded as a central European tax haven.

Tax authorities in Slovakia revealed that tax evasion amounting to an estimated €435.5 million occurred in 2009. This is a significant increase from the level recorded in 2008 of €380.9 million, the SITA newswire wrote, citing data by Slovakia’s Tax Directorate.

The effectiveness of tax inspections in finding evasion reached 59.8 percent in 2009 with a total of 18,820 inspections carried out, meaning that nearly six in 10 tax inspections found some form of tax evasion.

Evasion of payment of value-added tax made up the greatest portion of the total sum of reported tax evasions. In 2009 this represented €304.56 million, up €61.7 million compared with 2008. Tax inspectors are therefore focusing mostly on checking for these tax payments and of last year’s nearly 20,000 checks as many as 10,900 were aimed at collecting unpaid value added taxes. The Tax Directorate expects this focus to continue in the upcoming period.