Ski season could last till April

“MATEJ breaks the ice,” reads an old Slovak proverb, assuring us that after February 24, Matej’s nameday, we can expect an end to the winter chills and look forward to the coming of spring. 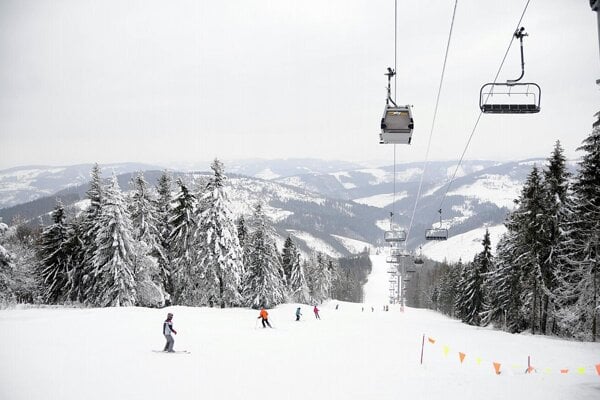 “MATEJ breaks the ice,” reads an old Slovak proverb, assuring us that after February 24, Matej’s nameday, we can expect an end to the winter chills and look forward to the coming of spring.

This year the old saying has proven almost 100-percent true. The 5- to 8-degree warming in the mountains has melted up to 20 centimetres of natural snow in some places. However, the warmer weather has had almost no effect on ski-slopes with artificial snow, where the ski season is continuing as normal. Meteorologists forecast a return of Arctic air around March 5 and 6, which should bring back the winter weather until mid March.

At the beginning of March at altitudes above 1,000m, above-zero temperatures are expected during the day but will fall below zero at night. Because of this, there’s a high chance that the slopes will be icy, especially in the morning.

On March 6, temperatures are expected to fall to minus ten, but those who are willing to face the cold have a slew of options available to them for winter-weather fun. Among these is the BigAir Slopestyle Contest taking place at Donovaly-Záhradište on March 6 which will bring the O2 Snowboard Tour to a close with their “show of thrilling jumps”.

Lomnické sedlo, Slovakia’s highest ski slope, is still waiting for 100 centimetres of snow before it can open its ski lift to the public; a situation that, although not frequently seen, is still not unheard of. If you do decide to take advantage of the spring skiing, don’t forget about the sun!