THE EMERGENCE of the first common state of Czechs and Slovaks after World War I created space for Slovaks to develop their national identity through culture. The atmosphere was just right for the Slovak National Theatre to be created. It was exactly 90 years ago. 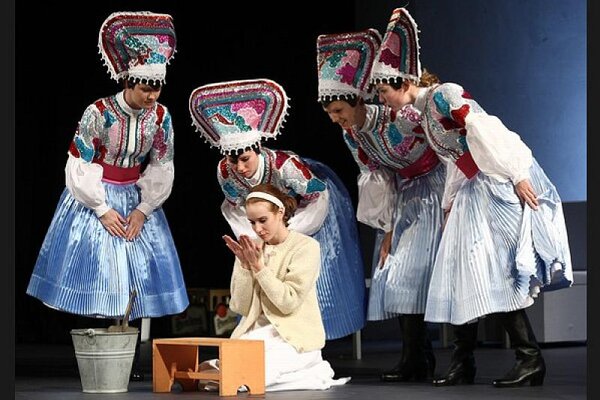 Mariša, staged again by the SND, 90 years after its premiere in the same building. (Source: Courtesy by SND)
Font size:A-|A+0

THE EMERGENCE of the first common state of Czechs and Slovaks after World War I created space for Slovaks to develop their national identity through culture. The atmosphere was just right for the Slovak National Theatre to be created. It was exactly 90 years ago.

The Slovak National Theatre (SND), the first professional theatre company of Slovaks, welcomed its first audience on March 1, 1920 for the premiere of The Kiss (Hubička), an opera by the famed Czech composer Bedřich Smetana. At that time, the staging was in the City Theatre – today’s Historical Building of the SND and it comprised theatre and opera companies. The theatre performed for the first time the piece Maryša by the Mrštík brothers on March 2 of the same year and the first ballet was staged in May 1920 with the performance of Coppélia by C. Ph. L. Delibes.

Despite the nation-awakening purpose that the national theatre was expected to fulfil, the language that resonated most in its production during its first years was Czech. The performances were mostly given by Czech actors from East Bohemia because of the general lack of professional Slovak actors in the initial years of the SND. Theatrologist and theatre historian Ján Jaborník said in an interview with the Sme daily that this was also due to people’s scepticism towards the profession of actors.

“The devout ideas that the SND should from its beginnings be constituted on purely Slovak grounds were unrealistic,” Jaborník said. “There could have been enough acting talents, but there weren’t many other things, mainly the courage to set the track of professional theatre.”

In 1921, the first Slovak actors (Andrej Bagar, Janko Borodáč, Olga Országhová-Borodáčová, Jozef Kello, and later Hana Meličková) joined the SND. After the arrival of the first professional Slovak director, Borodáč, in 1924, the number of plays performed in Slovak increased and in 1932 the dramatic group divided into two – a Czech group, headed by director Viktor Šulc and a Slovak group, headed by Borodáč, according to the history published on the SND website.

Another world war brought along the further Slovakisation of the theatre because many of the Czech actors left and were replaced by a young Slovak generation of actors that were to become the theatre’s most distinct personalities.

“In my opinion this was the key era of the [SND’s] development, though it was happening in a very bad time,” Jaborník told Sme. According to him, the years of the Slovak Nazi war state were when the SND for the first time presented the biggest works of world drama – from ancient times, through the Enlightenment, Romanticism and to the contemporary drama of that time, including the works of then-active Slovak dramatists.

The wartime totalitarian regime was soon replaced by another totalitarian regime, which was to last for much longer. For SND it meant nationalisation, which occurred in 1945. And despite the fact that the years 1948 – 1989 were marked by censorship and presentation of plays deformed by the communist regime, a strong Slovak generation of actors, directors and dramaturges emerged – on all three SND stages.

For the opera stage a notable event was the premiere of the Slovak opera Whirlpool (Krútňava) by Eugen Suchoň in December 1949, which according to the Sme daily was subjected to harsh critique for ‘formalism’ and ‘Christian spirit’, and was then later performed only in a shortened version.

According to Jaborník, the fifty years of the communist regime was the time of complicated, often even wildly divergent developments, which included at times nodding to the dominating ideology and later strong contributions to the anti-totalitarian movement and the eventual fall of the regime.

“The many positives cannot be erased even from the hardest times, that would mean impoverishment of several generational waves of talented artists,” Jaborník told Sme.

Two decades since the fall of the regime the SND has undergone significant changes, spiritual as well as material ones. After 20 years of waiting for the completion of the construction of a new building the SND moved to its new venue at the Danube River bank in 2007 and finally ballet, opera and drama can be performed under one roof in Slovakia. However, at the same time, the 90th anniversary of the SND finds it without a general director.

The management of the theatre has decided that its birthday celebration should involve the audience to a large extent. The celebrations were started with a gala programme on March 1, the day when the first opera was performed in 1920 which included contributions by all three companies: opera, ballet and drama.

“On Tuesday, March 2 – exactly 90 years after the premiere of Mariša, the first drama premiere, the drama department of SND presented at the same place – the historic building of the national theatre – its new work-up of the play,” said Zuzana Golianová, the SND spokesperson. The performance was followed by an informal discussion between the actors and the audience.

Apart from that, in the week between March 2 and 7 the SND presented several other dramas and operas, such as Herod and Herodias, The Taming of the Shrew, Mother Courage and her Children, Whirlpool, The Bartered Bride and others. The ballet department celebrated the anniversary by once again performing the classic Swan Lake.

“The selected titles are connected with the history or directly with the beginnings of the National Theatre,” Golianová said. “The contemporary theatre producers also today reach for works that had attracted previous generations. Their themes are eternal and the ways of their presentation are inexhaustible. In this symbolic time they can resonate as pleasant memories of the golden age of our theatre.”