Troubles in life and death

THE TOWN of Modra in the Small Carpathians is where Ľudovít Štúr, the awakener of Slovak national consciousness, lived at the end of his life. 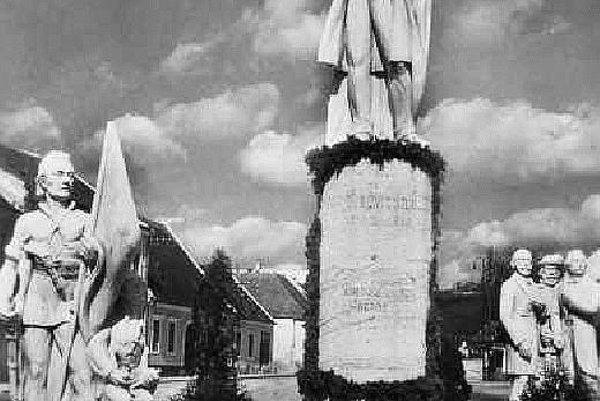 THE TOWN of Modra in the Small Carpathians is where Ľudovít Štúr, the awakener of Slovak national consciousness, lived at the end of his life.

Hard times began for Štúr after the 1848-49 revolution, during which he had led demands for Slovak rights within the Hungarian Empire. A warrant was issued for his arrest and he was forced into hiding for some time. After the death of his brother Karol, who had been the rector of the Modra secondary school, Štúr settled in Modra to take care of his brother’s seven orphans. Life was not easy for him there as he was under constant police surveillance and needed a special passport each time he wanted to leave the town. The town councillors made him feel that he was ‘persona non grata’. Ľudovít Štúr died on January 12, 1856, three weeks after accidentally shooting himself during a hunt.

Eighty-two years later, in 1938, a sculpture of Štúr and his comrades-in-arms was erected in the main square in Modra. It was made in Carrara, Italy and then transported to Modra. But Štúr, even in his marble form, had troubles with the new state power. The original date for the festive dedication of the memorial was set for October 1938, on the twentieth anniversary of the foundation of Czechoslovakia. However, some Slovak politicians objected, reflecting growing anti-Czech emotions among the local populace, and the ceremony was cancelled.

The next planned date was then rejected by Slovak President Jozef Tiso – a Catholic priest – who had become annoyed over the consecration of a new Protestant orphanage. The memorial committee did not agree with another postponement of the dedication and the celebration was delayed to some unspecified time in the future.

And so the formal festivities took place only after the WWII, when representatives of another state power, the Communist one, officially unveiled the sculpture of Štúr and his comrades.


We see the monument in this photo probably before it was officially dedicated – the postcard dates back to some time before the end of WWII.