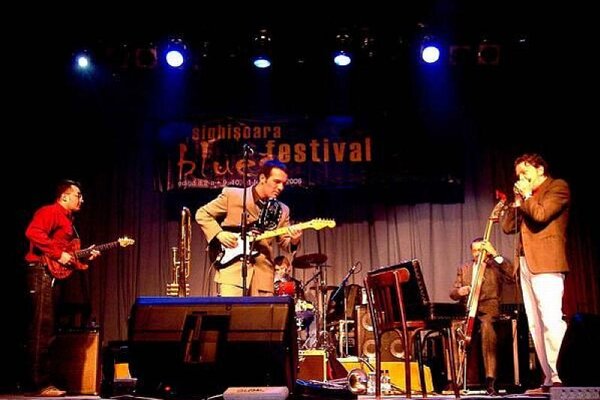 THE 18TH year of the Livin’ Blues Festival in Dom kultúry Lúky in Bratislava hosts groups like the Strempek Blues Band, Peter Koreň & Roots, Jozef Barina & The Meditating Four, Pepa Streichl of the Czech Republic, Blue Family from Serbia, Ado Juráček Band, Martina Javor Band, Ad Acta, and others. The festival begins on Saturday, March 20, on two stages simultaneously and offers quite a delicious taste of current streams of the blues. Tickets bought in advance cost €8.50, €9 through Ticketportal, and onsite for €10. For more info, call 02/6382-3930; or see www.kzp.sk.

Orfeus a Eurydika – This azione dramatica by Ch. W. Gluck will be staged in the National Theatre in cooperation with the Warsaw stage Teatr Wielki. It has won the main Dosky award at the Nitra Theatre Festival and the Award of Tatra Banka’s Foundation for Arts. Both Slovak and Polish actors excel in this work by the Polish director Mariusz Treliński.

Sheketak: Rhythm in motion – This Israeli dance-music group of 18 has performed nearly worldwide and has offered, through live music and dance, insight into rhythm, modern dance, non-traditional musical instruments and humour on stage.

Cyklus Junior – Within its “Junior” Cycle, the Slovak Philharmonic offers a concert of the Symphonic Orchestra of the College of Arts (VŠMU) conducted by Jaroslav Kyzlink, with works by Mendelssohn-Bartoldy, Frederic Chopin and Antonín Dvořák.

Tanečný dom – The House of Traditional Dance in this series of folk-dance workshops will teach people dances from Lendak (Spiš) – the Skokacka, Poza noge – and from Šariš – the Fintice. Mišo Noga Band plays and the group Dragúni teaches and organises the dance feast afterwards.

St Patrick’s Day in Slovakia - For the first time ever, the Irish Patron Saint’s day will be celebrated in Slovakia with demonstrations of Irish culture, featuring the Courragour Pipe and Drum Band and the Avalon dancing group; organised by the Irish Chamber of Commerce with the support of the Irish Embassy and Ryanair.

Jiří David – Kryštalické Brehy – This exhibition, one of two by the same author (the other is at Kopplova vila) shows the summary work of a key personality from among middle-aged Czech (and Czechoslovak) artists. The exhibition was made specifically for the space of a synagogue and reflects its historical memory.

The World Day of Observatories and Planetariums – Open Day. The Považie Observatory opens its doors for interested visitors between 9:00 and noon and between 18:45 and 20:45 to closely observe the Sun and the night sky.

GALÉRIA U sediaceho anjela in the eastern Slovak town of Kežmarok brings an exhibition of “naive” art Kovačické sny from Slovaks historically living in the Vojvodina region of Serbia that is open to the public until March 25, Monday to Friday from 10:00 to 17:00. For more info, call 052/4522-153, or go to www.galeriauanjela.sk.

Orientálny večer s Fatimou II – The programme hosted by Fatima group will include various types and kinds of oriental dance, plus Bollywood, Persian, and Tribal dance styles, an Oriental bazaar, and features the String Orchestra of the Basic Artistic School of J. Poschl and dancers Amilie from Taiwan and Shereen and Katka Krejčová from the Czech Republic.

Prešovská hudobná jar – The Prešov Musical Spring begins with a concert in the Cathedral of St. Nicolaus with the Stabat Mater programme, featuring as well works by G.B. Pergolesi, J.S. Bach and P. Eben. The concert is conducted by S. Šarišský with M. Olejníková on organ. Proceeds will go to the civic association Magis, aimed at helping abused women.